Caddis, Crystal and Company. His work derives from disciplines and historical precedents that are both combined with and often opposed to issues around modernity and conceptualism. Referencing archaeology, architecture, science, craft and art history his sculptures and installations are rooted in research yet are often imbued with a playful undertone. 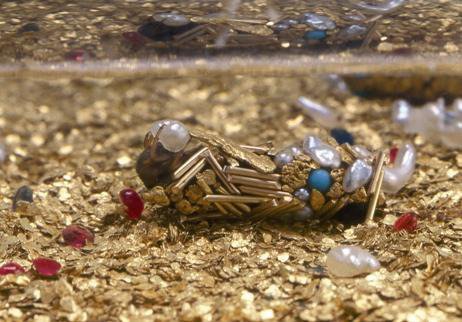 Hubert Duprat: Caddis, Crystal and Company is the first UK solo exhibition of the work of Hubert Duprat. One of the major figures of his generation, Duprat has shown nationally and internationally for over twenty years. Emerging as an artist in the early 1980s, Duprat’s output has taken many different forms. His work derives from disciplines and historical precedents that are both combined with and often opposed to issues around modernity and conceptualism. Referencing archaeology, architecture, science, craft and art history his sculptures and installations are rooted in research yet are often imbued with a playful undertone.

Duprat’s best known but rarely shown work with caddis fly larvae will be one of the many highlights of the exhibition. For this work, Duprat observed the insects’ particular habit of building cases from nearby objects - such as pebbles and twigs. Duprat collected the larvae from their natural environment, relocated them to his studio and placed them in temperature controlled water tanks. He then provided the larvae with miniature pieces of gold and different precious stones - turquoise, opals, pearls, rubies and diamonds. On entering the exhibition space, visitors can witness the larvae, who themselves measure only 2-3mm engaged in their miniature but miraculous labour.

In addition the exhibition will include a selection of Duprat’s enchanting sculptures that include animal heads carved from flint that reference early image making and shadow casting; a work made from coral that confuses the line between the artificial and the man made as well as sculptures made from pyrite and calcite crystal.

The winner of this year’s Tate Art Shorts – a short film has been made on the artist that includes a rare interview along with footage of the caddis at work to uploaded to the site shortly.

The exhibition is curated by Harriet Godwin, Curator of Modern & Contemporary Art, Norwich Castle. A fully illustrated catalogue, the first publication in English devoted to the work of Hubert Duprat, accompanies the exhibition with contributions from Stephen Bann, Guillaume Désenges and Martin Herbert.

The exhibition will be accompanied by an extensive public programme, as well as an international conference in collaboration with the Open University and Cambridge University on Contemporary Art & Alchemy on 3rd & 4th June 2011. Speakers include Stephen Bann, Brian Dillon, Alyce Mahon, Gill Perry among others. Further details will be uploaded shortly.

If you have any questions in the meantime please email Harriet Godwin harriet.godwin@norfolk.gov.uk

Norwich Castle Museum and Art Gallery is located on top of the Castle mound, surrounded by the Castle Gardens.
The Castle Gardens run between Castle Meadow and Market Avenue and can be accessed from both roads
Norwich - Norfolk NR1 3JU