The Asbo Mystery Play and other public works. The exhibition comprises an eclectic range of prototypal designs - at once an homage to and subversion of the notion of the 'public monument'. Collectively, they form an elliptical commentary on society and the city, compressing arcane and lowbrow cultural references. 'The Gild the Lily Files' is a selection of the 'original' collages, bromides, silkscreens and other paraphernalia associated with the last show Kane and Periton worked on collaboratively in 1993. 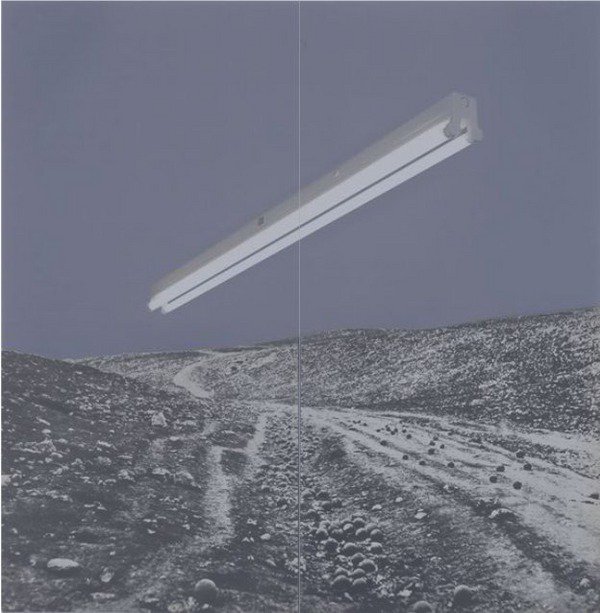 The Asbo Mystery Play and other public works is a new collaborative exhibition by Alan Kane and Simon Periton which centres upon a series of proposals for public artworks. Periton and Kane have separately undertaken significant public art projects, individually and in collaboration with other artists, but last made a collaborative body of work together in 1993 with an exhibition of posters entitled Gild the Lily. The Asbo Mystery Play… exhibition seeks to reanimate the sensibility that produced that work.

The premise of these new works is to consider public art strategies and positions – that may have been, may yet be, or can never be adopted – as a field of operation, with the 'public' and commissioners remaining abstract quantities. This framework allows for a conflation of private, subjective speculation and a sense of public expression or an intellectual 'outdoorsness'.

The exhibition comprises an eclectic range of prototypal designs – at once an homage to and subversion of the notion of the 'public monument'. Collectively, they form an elliptical commentary on society and the city, compressing arcane and lowbrow cultural references ranging from Stan Hill's barber's shop window from Faversham circa 1970 to the peat bog Tollund Man to the modern subcultural phenomena of Punk, Wicca and ASBOs. The works reflect the two artists' individual histories as well as various collaborations, whether actual or hypothetical.

Street Lighting for City Square proposes a solution for urban lighting through a cheap throwaway cigarette lighter enlarged to 2.5 metres tall, which stands proudly in the gallery with a flame burning, Olympian style, from the top. The Asbo Mystery Play of the show's title is a suggestion of a performative tradition acted out in the street. Its roots lie in traditional Mummers' plays and once-popular religious dramatisations, but are combined with a dark take on carnival and alcopop youth culture. All these elements are intimated through documentary artefacts, recordings and mannequins sporting some of the drama's costumes, which have been laid out in a tableau before a photo-mural of an ordinary British high street. Huddled on the floor is a cast concrete hooded body curled up on the floor, lighter and ligature by its side. This contemporary bog person, archaeological and Druidic, is titled Flat Pack/Multi Storey Man, and also represents a concrete work for basement car park.Outside the downstairs gallery hangs the Prison Piñata: work for prison exercise yard. A concrete block and baseball bats form a bathetic parody of the philosophical motif of the unsculpted block enclosing an unavailable potential: this impenetrable cube contains a selection of "prison treats".

In Balfour Mews the artists are presenting a discrete exhibition, The Gild the Lily Files. This is a selection of the 'original' collages, bromides, silkscreens and other paraphernalia associated with the last show Kane and Periton worked on collaboratively in 1993. Dramatising the retrospective nature of the show, these are presented in the archival fashion of traditional museum displays, with the pieces placed in dark brown wooden frames with off-white window mounts, their titles embossed and gilded in the mounts. There is also a glass topped table display case containing a selection of postcard versions of the exhibition's original posters, which have been arranged in the deliberately haphazard style employed in the Gild the Lily exhibition.

Simon Periton (b. 1964) has recently undertaken commissions for York Art Gallery and Tate St Ives. From April-May 2011, his sculpture The Outsider / The Insider is on display at Roche Court, New Art Centre, Salisbury, UK, as part of the exhibition The Hepworth Wakefield: A Celebration Backbone: Modern British Sculptors. Group exhibitions include Undone: Making and Unmaking in Contemporary Sculpture, Henry Moore Institute, Leeds and The Dark Monarch: Magic and Modernity in British Art, Tate St Ives and Towner Gallery, Eastbourne (2011). Commissions include public sculpture projects for firstsite, Colchester, Essex, Channel Four, and the Victoria and Albert Museum.

Both artists live and work in London.