Collab: Four Decades of Giving Modern and Contemporary Design features outstanding examples of 20th- and 21st- century furniture, ceramics, glass, lighting and functional objects. The exhibition commemorates the 40th anniversary of Collab, a collaboration of design professionals and enthusiasts founded in 1971 and includes important works by leading designers such as Alvar Aalto, Charles and Ray Eames, Frank Gehry, Ettore Sottsass, Jr., Philippe Starck, among the others. 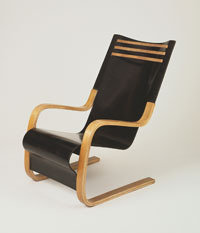 Showcasing nearly 60 out of the hundreds of works of modern and contemporary design acquired through the generosity of the Philadelphia Museum of Art’s support group for Modern and Contemporary Design, Collab: Four Decades of Giving Modern and Contemporary Design features outstanding examples of 20th- and 21st- century furniture, ceramics, glass, lighting and functional objects. It commemorates the 40th anniversary of Collab, a collaboration of design professionals and enthusiasts founded in1971 to support the development of the modern and contemporary design collection at the Museum through acquisitions, special exhibitions, and programming, and includes important works by leading designers such as Alvar Aalto, Charles and Ray Eames, Frank Gehry, Ettore Sottsass, Jr., Philippe Starck and others.

“Collab members have demonstrated a sustained commitment to helping the Museum acquire key works in the history of design,” said Timothy Rub, the George D. Widener Director and CEO at the Philadelphia Museum of Art, “and this effort has made our collection one of the largest and most important of its type in any museum in this country. Collab has been equally active in its efforts to promote a broader understanding and appreciation of design in our community, and for this we are also deeply grateful.”

“The exhibition reflects the wonderful depth of the Museum’s collection of modern and contemporary design,” said Diane Minnite, Collections and Research Assistant, European Decorative Arts and Sculpture, who organized Collab: Four Decades of Giving. “Collab’s support has enabled us to add important groups of objects to the collection, such as a selection of works by Italian designer Joe Colombo (Italian, 1930-1971), and a fantastic variety of psychedelic posters from the late 1960s.”

Collab: Four Decades of Giving is arranged chronologically, beginning with a 1907 chair designed by Joseph Hoffmann for the barroom of the Vienna Kaberett Fledermaus, and ending with the 2006 “Veryround” chair by Danish designer Louise Campbell. All of the works are gifts made to the Museum by Collab or individual members of the committee, and together offer a rich and fascinating overview of modern and contemporary design.

A key object in the exhibition is the MR-20 armchair and stool, made of chrome-plated steel with lacquered caning by Ludwig Mies van der Rohe (American, born Germany), which was given to the Museum by Collab in 1978 in memory of Roland Gallimore, a noted Philadelphia architect and chairman of Collab from 1974 to 1975. The gift inaugurated a tradition of donating objects to the Museum in honor of Collab chairpersons that has continued to the present. Other works given in honor of chairpersons include an important three-piece set of furniture by Finnish designer Alvar Aalto. Given on the occasion of Collab’s 15th anniversary and in honor of founding member Cynthia Drayton, Aalto’s Armchair and Armchair, Model No. 31 (both designed c. 1931-32), along with Tea Cart (1936) are among several notable objects acquired during the 1980s.


A number of works in the exhibition signal important trends in modern design. These include Gerrit Thomas Rietveld’s celebrated Zigzag chair (1932-33), Bruno Mathsson’s Pernilla Chair and Mifot Footstool (1941-43), and George Nelson’s Ball Wall Clock (1947). This painted birch, steel, and brass clock was included in the 1983 landmark Collab exhibition Design since 1945, an exhibition designed by Nelson, and the last major project completed by the American designer before his death in 1986.

Iconic designs from the 1950s including Charles Eames’ Rocking Chair (1950-53) and Arne Jacobsen’s Egg armchair (1957) represent “one of the strengths of the collection,” according to Minnite, and are augmented by household items by Kaj Franck (Finnish, 1911-1989) and lighting by Poul Henningsen (Danish 1894-1967).

A 1994 exhibition titled Japanese Design: A Survey Since 1945 resulted in the acquisition of a number of important examples of Japanese design, including Shiro Kuramata’s How High the Moon armchair and Kito Toshiyuki’s Wink chair, both from the 1980s. Other recent designs from the 1990s to today include an “iMac” computer (1998) designed by the Apple Industrial Design Team, a kitchen system (2004) by the German firm Storno Design, and Patricia Urquiola’s brightly accented Antibodi Chaise (2006).

The opening of Collab: Four Decades of Design will also mark the publication of Collecting Modern: Design at the Philadelphia Museum of Art since 1876 (ISBN 978-0-87633-221-4; $65), written by Kathryn Bloom Hiesinger, Curator of European Decorative Arts after 1700. Published by the Philadelphia Museum of Art, this is the first historical survey of the growth of the Museum’s design collections, chronicling the institution’s changing attitudes toward the collecting of the contemporary decorative arts and design from its founding in the late 19th century to the present day. Included is an account of Collab, from its founding by Cynthia Drayton and Evan Turner to the introduction of the Collab Design Excellence Award in 1987, and the citywide college-level student design competition started in 1993. The publication of this book has been generously supported by a grant from Lisa Roberts and David Seltzer.

About Collab:
Collab is a collaboration of design professionals and enthusiasts supporting the modern and contemporary design collection at the Philadelphia Museum of Art. A volunteer committee founded in 1970, Collab is dedicated to enriching the Museum’s modern and contemporary design collection with outstanding examples of mass-produced and unique designs, and making the collections accessible to the general public, students, and the design community through special exhibitions and programming. Now among the most important in the country, the design collection houses more than 2,500 objects ranging from furniture to ceramics, glass, wallpaper, lighting, and functional objects.

Through its sponsorship of the Design Excellence Award, Collab has recognized the significant contributions to design history of individuals such as Ingo Maurer, Gaetano Pesce, Maya Lin, Frank Gehry, Florence Knoll Bassett and Milton Glaser, to name a few. This year’s recipient is architect Zaha Hadid, one of the most innovative and visionary architects of our time and the first female recipient of the renowned Pritzker Architecture Prize (2004). The award ceremony will take place November 19, 2011 in the Philadelphia Museum of Art’s Van Pelt Auditorium, and is held in conjunction with Zaha Hadid: Radical Designs for Living, September 17, 2011 – April 2012 in the Exhibitions Gallery of the Perelman Building.

In collaboration with the award program, the Collab Student Competition highlights the design ingenuity of regional college students as inspired by the work of the current award recipient. The 2011 challenge in conjunction with Zaha Hadid: Radical Designs for Living is to design a piece of luggage, or an “Overnight Bag.”
This exhibition was made possible by Lisa S. Roberts and David W. Seltzer.