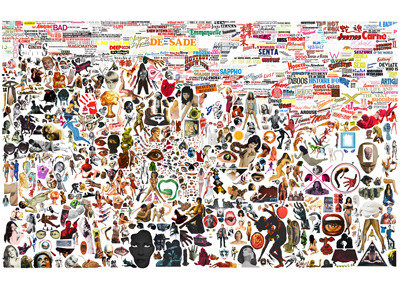 Simmons & Burke cull sound and image from the Internet to create their dense, layered works. The collaborative team has combined over 15,000 found images to form a single piece. Similarly, their audio works feature endless loops of merged sounds, samples, and voices. The results are hypersaturated pieces with multiple narratives—not unlike Hieronymus Bosch paintings reconceived for our time. “We like the idea of making a Frankensteinian world that is both overwhelming and quieting,” Case Simmons and Andrew Burke have said. Simmons & Burke have most often presented the prints and audio together, creating enveloping, multi-sensory environments for the viewer. Their works are stunning visual tapestries paired with curious aural cacophonies.

In Media(s) Res, Media(s) In Res is the team’s first museum exhibition. For the Project Room at SMMoA, Simmons & Burke will premier an immersive four-channel voice-scape as well as three new large-scale digital prints. The sound installation for In Media(s) Res, Media(s) In Res will feature appropriated dialogue in the form of questions from internet sources. The samples are taken from amateur recordings of fiction—interrogatives cut from readings of such diverse works as Huckleberry Finn, Canterbury Tales, or As I Lay Dying. The questions are then programmed with non-linear algorithmic techniques that constantly rearrange and shift so that a visitor would never hear the same compilation of questions twice. The questions are delivered non-stop throughout the space of the project room, and will, quite literally, remain unanswered. The installation comprises 3000 discrete questions--making the the viewer’s experience at once contemplative and unrelenting.

Simmons & Burke then transcribed the questions, made an image of each, and cut and collaged them into the large scale digital prints on view in Project Room 2. Each print features 1000 questions; taken together, they are the documentation of the entire sound library--they are dense and layered with content. The exhibition will also be accompanied by a specially made artists’ book in the form of a score or libretto.

Simmons & Burke began their collaboration in 2006 with their Temple series. Case Simmons studied at the San Francisco Art Institute and Andrew Burke received his MM from the University of Cincinnati College Conservatory of Music. Their work is held in La Colección Jumex, Mexico City, and in the permanent collection of the Guggenheim Museum, New York.

The exhibition at SMMoA will feature the premier of Evolution (Megaplex), 2010, a new large-scale 3D video collage, which displays the history of humankind through the lens of cinema. In this never before seen work, Brambilla combines hundreds of clips from genre films that re-enact historical moments as grand spectacle. This cacophony of images is looped and mapped into an infinite three-dimensional environment that scrolls horizontally across time. Evolution emphasizes conflicts through the ages, in a remix that seamlessly moves through past, present, and future, providing a satirical take on the bombast of the big-budget “epic.”

In a poignant work from 2002 titled HalfLife, Brambilla juxtaposes surveillance footage of gamers playing the then-popular video game Counter-Strike with live-feed footage of the game they are playing. By placing the young men in the “cross-hairs” point-of-view while simultaneously capturing their virtual actions inside the game-world, Brambilla highlights the physical displacement and the psychological dislocation inherent in entering the digital world.

Cathedral, 2008, in which Brambilla filmed Christmas shoppers in a Canadian mall, exposes raw footage in a long and slow sequence of kaleidoscopic patterning. The superimposed and multi-layered images transform the mall into a hallucinatory space. Though it resembles an animated stained glass window, the work depicts commerce and conspicuous consumption, and the conflation of a “shoppers’ paradise” with a literal place of worship.

Brambilla’s Civilization (Megaplex), 2008, is dense with imagery and depicts heaven, hell, and in-between, in an epic, almost Dante-esque style, set to an excerpt from Stravinsky’s Rite of Spring. His first ‘video mural’ integrates clips into an expansive landscape that continuously scrolls downward, starting with the fires of hell, progressing through to celestial reward. Other works in the exhibition include Wall of Death, 2001; Sync, 2005; and Sea of Tranquility, 2006.

The ambitious installation design of The Dark Lining will mirror Brambilla’s complex visual arrangements where the viewer is led, almost transported, from singular, theater-like stations to open spaces where multiple works present themselves in layered concert with one another. The exhibition at SMMoA is unique from previous installations as this will present multiple significant works from the last decade and illustrate Brambilla’s artistic range and evolution. The exhibition itself, therefore, will function as an artwork—one that is revealed with the audience’s choreographed movement through a well-orchestrated and articulated space.

Marco Brambilla studied film at Ryerson University, Toronto, Canada, and then worked in commercials and feature films, directing the successful 1993 science fiction film Demolition Man. In 1998, he shifted his focus to video and photography projects as an artist and filmmaker. His work has been exhibited internationally at such institutions as the Kunsthalle Bern, screened at the Sundance and Cannes film festivals, and can be found in the permanent collections of the Guggenheim Museum, the San Francisco Museum of Modern Art, the New Museum of Contemporary Art, and the ARCO Foundation in Madrid, amongst others. Brambilla has been awarded both the Tiffany Comfort Foundation and Colbert Foundation awards for his video installations. He was born in Milan, Italy, and currently lives and works in New York and Los Angeles.