For her exhibition at the gallery, Silveira presents her signature vinyl-decal mural-installations. The main installation, from her celebrated series, Desaparencia, depicts black and white diagrams of artists' ateliers, graphically suggesting the ghosts of easels, tables, palettes, and other tools of the artist's studio. 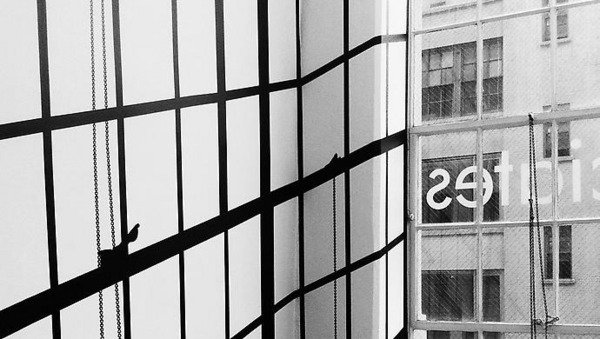 Alexander Gray Associates is pleased to present the gallery’s second exhibition with the Brazilian artist, Regina Silveira. Since the 1960s, Silveira’s work has defied genre, moving between forms of installation, printmaking, sculpture and photography to explore visual distortion, perspective and scale.

For her exhibition at the gallery, Silveira presents her signature vinyl-decal mural-installations. The main installation, from her celebrated series, Desaparencia, depicts black and white diagrams of artists’ ateliers, graphically suggesting the ghosts of easels, tables, palettes, and other tools of the artist’s studio. In its iteration at Alexander Gray Associates, Silveira’s installation suggests the disappearance of traditional studio practice and location, as well as expectations of creation and alchemy that surround artistic mythology.

Further exploring the gallery’s architecture, Silveira presents a new, site-specific installation in the gallery’s viewing room, facing Phase II of the High Line park. Viewable from the 26th Street fly-over and staircase, Silveira projects a false shadow of the gallery’s 1920s casement windows onto a long wall; the impossibility of this cast through a north-facing window underscores the illusionistic impulse of Silveria’s oeuvre.

Born in Porto Alegre, Brazil in 1939, Regina Silveira lives and works in São Paulo, Brazil. She holds a Ph.D from the Escola de Comunicações e Artes da Universidade de São Paulo, where she has taught since 1974. Her work is currently the subject of a survey at the Funação Ibere Camargo in Porto Alegre, Brazil. Her work will be included in Prospect.2 in New Orleans and the 2011 Mercosul Biennial in Porto Alegre, and upcoming projects at the Rubin Center for Visual Arts at the University of Texas at El Paso, and the Aldrich Museum of Art in Ridgefield, CT.

Alexander Gray Associates is a contemporary art gallery based in New York. The gallery has established a profile for high-quality exhibitions focused on mid-career artists who emerged in the 1960s, 1970s, 1980s, and 1990s. Influential in political, social and cultural spheres, these artists are notable for creating work that crosses geographic borders, generational contexts and artistic disciplines.