Thanks for Explaining Me. This exhibition presents 12 recently restored films as well as a selection of drawings, collages, color and b/w photographs, two seminal slide shows. Three collaborative works are also on view, in which artists Ryan McNamara, A.L. Steiner, and T.J. Wilcox appropriate heretofore unseen Jack Smith film material to create contemporary meditations on his fascinating life and work. 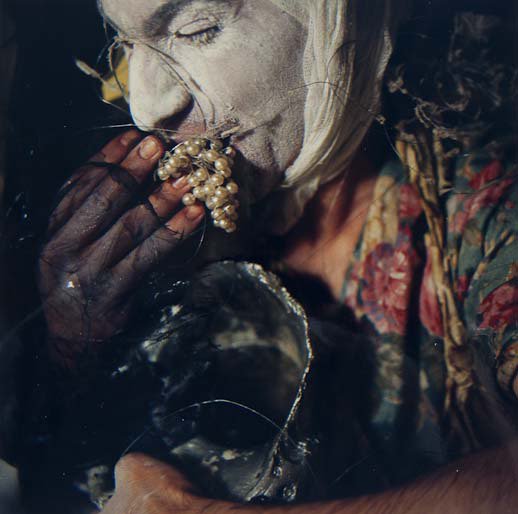 Gladstone Gallery is pleased to announce our first exhibition of works by Jack Smith. Following his arrival in New York in 1953, Smith became one of the most influential members of the American avant-garde and a central figure in the cultural history of the film, performance, and art of downtown New York. Curated by Neville Wakefield, this exhibition will present 12 recently restored films as well as a selection of drawings, collages, never before seen color photographs, black and white photographs, and two seminal slide shows. Three collaborative works will also be on view, in which artists Ryan McNamara, A.L. Steiner, and T.J. Wilcox appropriate heretofore unseen Jack Smith film material to create contemporary meditations on Smith’s fascinating life and work. Wakefield has conceived of his curatorial endeavor as a tributary approach to Smith’s creative practice and panoptic production, writing:

"More than almost any artist of the last century Jack Smith understood that within the prevailing cultures of success, art’s greatest role may have been to provide provision for public failure. To this end his actors and accomplices, props and lighting, drugs and desires were invariably wrong: wrong before the performance had started – before even the lights had gone down. The marathon of tourettic revisions, false starts and delays signaled to the world the impossibility of creating anything of value in a rectilinear lagoon where even the dedicated and willing were dragged to the bottom-feeding level of landlords and lobsters. Yet out of these impossible conditions was born the stuff of exquisite beauty, radical politics, lurid, caustic, pornographic and often hilarious evocations of the sexual and social strata in which we find ourselves. Much of this endures even in conditions Smith would have most likely have loathed. But the fact that the same frictions that heated and formed his work continue to frustrate curators as well as inflame and inspire artists – including those who have agreed to continue the spirit and legacy with works created for this show - is, I hope, testament to the enduring power and influence of Jack Smith’s extraordinary art."

A special film program will take place on Saturdays from 4-6 pm during the run of the exhibition, wherein newly restored Jack Smith prints will be screened on 16mm celluloid. The films will be introduced by film historians, scholars, friends and collaborators of Jack Smith. The Saturday series will present a rare opportunity to see these eleven film prints in the context of the artist’s larger body of work.

Jack Smith was born in Columbus, Ohio in 1932 and died in New York in 1989. In 1998 PS1 mounted a retrospective of Jack Smith’s work that traveled to the Warhol Museum in Pittsburgh.

Gladstone Gallery has represented the Estate of Jack Smith since 2008.

Uzi Parnes, Ph.D., is a filmmaker and photographer who was a friend of Jack Smith. He works frequently with Ela Troyano and Carmelita Tropicana and photographed Smith from 1982-89.

Penny Arcade is an internationally acclaimed performance artist, writer and cultural icon. A teenage superstar in Andy Warhol's Factory and featured in the film Women In Revolt, Penny Arcade saved Jack Smith's work at his death and with film critic J Hoberman formed The Plaster Foundation.

Jerry Tartaglia is a filmmaker whose work in Queer cinema spans four decades. In the early 1990s he began work on the restoration of the films of Jack Smith, following the maxim that no good deed goes unpunished.

Ela Troyano is a Cuban born filmmaker based in New York City. She met Jack Smith after his play The Secret of Rented Island in 1976 and was friends with him until his death of AIDS in 1989.