The Future of a Promise 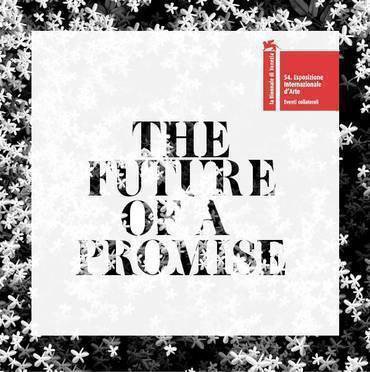 The Future of a Promise will be the largest Pan-Arab show of contemporary art at the 54th International Art Exhibition – la Biennale di Venezia. From Tunisia all the way to Saudi Arabia, this landmark exhibition brings together more than twenty-five recent works and commissions by some of the foremost artists from the Arab world.

Presenting important works that range from installation, performance and photography, to video, sculpture and painting, The Future of a Promise includes the following artists:

The exhibition is being curated by LINA LAZAAR, produced by EDGE OF ARABIA and supported by ABDUL LATIF JAMEEL COMMUNITY INITIATIVES and ABRAAJ CAPITAL, three newly partnered organisations whose commitment to contemporary art practice in the Middle East is at the heart of a current artistic renaissance in the region.

The Future of a Promise examines the way in which an idea is made incarnate in a formal, visual context and how a promise opens up a horizon of future possibilities, be they aesthetic, political, historical, social or critical. With the events currently unfolding in the Middle East, the question of the future and the promise inherent within culture has assumed an even more acute degree of pertinence. It is with this in mind that the exhibition enquires into the promise of visual culture in an age that has become increasingly disaffected with politics as a means of social engagement. Whilst the artists included in The Future of a Promise are not representative of a movement as such, they do seek to engage with a singular issue in the Middle East today: who gets to represent the present-day realities and the horizons to which they aspire?

'Through the artworks selected, I wanted to investigate how artists from this diverse, fragmented region have responded to the often contradictory promises that have defined our history,' says curator Lina Lazaar. 'I am incredibly proud and honoured to be putting together this exhibition in 2011, at such critical times for the Arab world, and I very much hope to create the rightful platform for these voices to be heard.'

On the occasion of the 54th International Art Exhibition, Ibraaz Publishing will launch its first volume, The Future of a Promise, alongside its on-line research platform. Through the publication of essays by academics, artists, curators, historians, commentators, writers, and critics, www.ibraaz.org will offer a primary research forum for in-depth, peer-reviewed texts about the MENA region. The long-term ambition of the project is to utilise these essays and ideas to further commission and develop full-length, illustrated books.