Elliott Erwitt: Personal Best, a substantial retrospective exhibition of his work. The exhibition will include more than 100 of Erwitt's favorite images, a selection of his documentary films produced over the past sixty years, as well as some previously unseen and unpublished prints from his early work. Hiroshima: Ground Zero 1945, once-classified images of atomic destruction, this show will include approximately 60 contact prints and photographs as well as the secret 1947 United States Strategic Bombing Survey (USSBS) report, The Effects of the Strategic Bombing on Hiroshima, Japan. 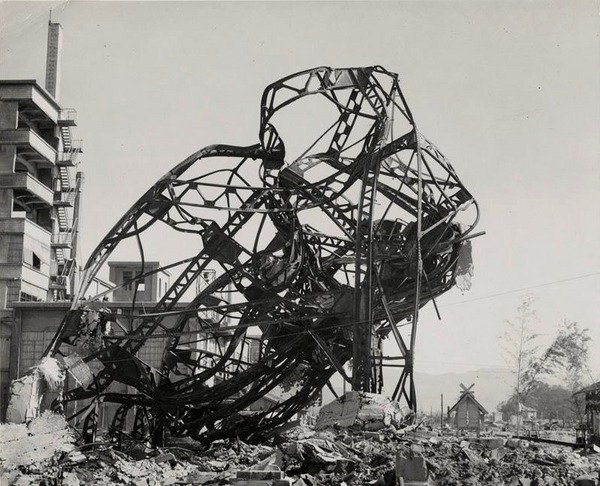 An eyewitness to history and a dreamer with a camera, Elliott Erwitt has made some of the most memorable photographs of the twentieth century. A substantial retrospective exhibition of his work, Elliott Erwitt: Personal Best, will be on view at the International Center of Photography (1133 Avenue of the Americas at 43rd Street) from May 20 to August 28, 2011. The exhibition will include more than 100 of Erwitt’s favorite images, a selection of his documentary films produced over the past sixty years, as well as some previously unseen and unpublished prints from his early work. Erwitt will also be honored on May 10 as the Lifetime Achievement recipient at the 2011 ICP Infinity Awards.

Born Elio Romano Erwitz to Russian Jewish émigrés in Paris in 1928, Erwitt spent his childhood in Italy, returned to France in 1938, and emigrated to the United States with his family in 1939. After moving to Los Angeles in 1941, Erwitt attended Hollywood High School and began working in a commercial darkroom processing photographs of movie stars. He studied filmmaking at the New School for Social Research in New York from 1949 to 1950, and worked as a documentary photographer on the Standard Oil Company project directed by Roy Stryker.

After military service, Erwitt returned to New York, where he met Edward Steichen and Robert Capa, who became strong influences in his life. In 1953, he was invited by Capa to join Magnum Photos, and in 1955 he was included in Steichen’s Family of Man exhibition. From early on, Erwitt set his own criteria for photographing. During the 1940s and 1950s, when many noted fine-art photographers followed established guidelines for exposure, focus, and composition, Erwitt developed his own ideas. With an incisive, humanistic sense of observation and a finely honed wit, he illuminated the small moments of life, even when covering major news events.

“To me, photography is an art of observation,” said Erwitt. “It’s about finding something interesting in an ordinary place... I’ve found it has little to do with the things you see and everything to do with the way you see them.”

Throughout six decades of making pictures, Erwitt has been recognized for his versatility. While famous for personal photographs of people and dogs and widely reproduced commercial imagery, Erwitt is also respected for his work as a photojournalist. Among the iconic moments he has captured with his camera are the Khrushchev-Nixon “Kitchen Debate” in 1959, and Jacqueline Kennedy, veiled and in distress at the funeral of her husband in 1963; his photograph of segregated water is a poignant reminder of the injustices of the Jim Crow South. Erwitt is also celebrated for portraits, including such distinguished subjects as Grace Kelly, Alfred Hitchcock, Jack Kerouac, Marilyn Monroe, Marlene Dietrich, and Che Guevara.

“Erwitt is noted for his offbeat sense of humor, combining gentle whimsy with ironic observation of everyday life. Often these works involve visual puns that make the viewer look twice, but they are always organized with great elegance and precision,” said ICP Chief Curator Brian Wallis, who organized the exhibition.

Internationally renowned for his photographs, Erwitt is also a recognized filmmaker. His documentaries include Beauty Knows No Pain, Red, White and Blue Grass, and The Glassmakers of Herat. He has also produced seventeen comedies and satires for HBO. To date, he has authored more than twenty photography books, including Eastern Europe (1965), Photographs and Anti-Photographs (1972), Son of Bitch (1974), Personal Exposures (1988), Between the Sexes ( 1994), Elliott Erwitt’s Handbook (2002), and Elliott Erwitt: Personal Best (2009).

The exhibition was made possible by an anonymous donor and with public funds from the New York Department of Cultural Affairs in partnership with the City Council.

Once-classified images of atomic destruction at Hiroshima will be displayed in a new exhibition Hiroshima: Ground Zero 1945 at the International Center of Photography (1133 Avenue of the Americas at 43rd Street) from May 20 to August 28, 2011. Drawn from ICP’s permanent collection, the Hiroshima archive includes more than 700 images of absence and annihilation, which formed the basis for civil defense architecture in the United States. These images had been mislaid for over forty years before being acquired by ICP in 2006.

This exhibition will include approximately 60 contact prints and photographs as well as the secret 1947 United States Strategic Bombing Survey (USSBS) report, The Effects of the Strategic Bombing on Hiroshima, Japan. It will be accompanied by a catalogue published by ICP/Steidl, with essays by John W. Dower, Adam Harrison Levy, David Monteyne, Philomena Mariani, and Erin Barnett.

After the nuclear attacks in August 1945, President Truman dispatched members of the USSBS to Japan to survey the military, economic, and civilian damage. The Survey’s Physical Damage Division photographed, analyzed, and evaluated the atomic bomb’s impact on the structures surrounding the Hiroshima blast site, designated “Ground Zero.” The findings of the USSBS provided essential information to American architects and civil engineers as they debated the merits of bomb shelters, suburbanization, and revised construction techniques.

The photographs in this exhibition were in the possession of Robert L. Corsbie, an executive officer of the Physical Damage Division who later worked for the Atomic Energy Commission. An architectural engineer and expert on the effects of the atomic bomb, he used what he learned from the structural analyses and these images to promote civil defense architecture in the U.S. The photographs went through a series of unintended moves after Corsbie, his wife and son died in a house fire in 1967.

The U.S., at war with Japan, detonated the world’s first weaponized atomic bomb over Hiroshima, a vast port city of over 350,000 inhabitants, on August 6, 1945. The blast obliterated about 70 percent of the city and caused the deaths of more than 140,000 people. Three days later, the U.S. dropped a second nuclear bomb on Nagasaki, resulting in another 80,000 fatalities. Within a week, Japan announced its surrender to the Allied Powers, effectively ending World War II.

“Once part of a classified cache of government photographs, this archive of haunting images documents the devastating power of the atomic bomb,” said ICP Assistant Curator of Collections Erin Barnett, who organized the exhibition.