The Morning Line in Vienna

Thyssen-Bornemisza Art Contemporary inaugurates 'The Morning Line', its most ambitious public art project to date. A four-day Festival for Contemporary Music Composition will kick off The Morning Line's six months residency on Schwarzenbergplatz. The Morning Line is an interdisciplinary platform where artists, architects, engineers, physicists, sound designers and musicians each contribute their own specialized information to create a new form. 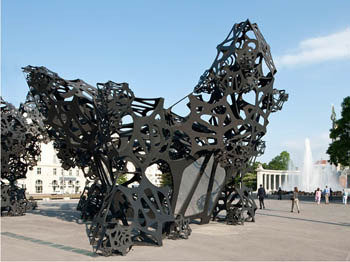 On June 7, Thyssen-Bornemisza Art Contemporary (T-B A21), the Vienna based foundation for contemporary art founded by Francesca von Habsburg, will inaugurate The Morning Line—its most ambitious public art project to date. A four-day Festival for Contemporary Music Composition featuring 27 sound artists and nine new compositions, specially conceived for the pavilion's sonic architecture, will kick off The Morning Line's six months residency on Schwarzenbergplatz.

Conceived by the New York based artist Matthew Ritchie as an inherently collaborative structure, The Morning Line is an interdisciplinary platform where artists, architects, engineers, physicists, sound designers and musicians each contribute their own specialized information to create a new form: a mutable structure, with multiple expressions and narratives intertwining in its physical structure, projected video and innovative spatialized sound environments. Ritchie teamed up with design innovators Aranda/Lasch, the Music Research Centre of York University and Arup AGU to create the next leap in a fully programmable three-dimensional sound space. Based on advances in research on crystalline structures, parametric design and fractal construction units, The Morning Line is a fully scalable space; its innovative structure can adopt every configuration, it is transportable from site to site and acts as a performance space.

Following its inaugural presentation at the 3rd Biennial of Contemporary Art of Seville, Spain, curated by Peter Weibel in 2009, and its subsequent exhibition at Eminönü Square, one of Istanbul's busiest public spaces, as part of Istanbul 2010 – European Capital of Culture, The Morning Line continues its journey around the world. T-B A21 is proud to present The Morning Line in Vienna, the home of the foundation. The city's significance as one of the world's centers for music and performance will lend a special emphasis to the project's music programming.

As The Morning Line continues to travel the world as a platform for contemporary music, and within its mandate to encourage and support the production of innovative composition wherever it tours, T-B A21 has appointed the internationally renowned, Austrian musician and sound artist Franz Pomassl to act as a guest curator for the project's presentation in Vienna. New sonic works by Alexej Borisov (Russia), Christian Fennesz (Austria), Tommi Grönlund & Petteri Nisunen (Finland), Carsten Nicolai (Germany), Zsolt Olejnik (Hungary), Finnbogi Petursson (Iceland), Terre Thaemlitz (USA), Zavoloka (Ukraine) and Franz Pomassl will be premiered over the first few days of the festival. They will supplement the existing archive of 17 music and soundscape pieces selected by guest curators Florian Hecker, Bryce Dessner, Russell Haswell and ITU-MIAM/Istanbul.

Thyssen-Bornemisza Art Contemporary
Founded in Vienna in 2002 by Francesca von Habsburg, Thyssen-Bornemisza Art Contemporary is committed to supporting the production of contemporary art and is actively involved in commissioning and disseminating unconventional projects. After nine years of collecting art, initiating challenging projects and an engaged exhibition practice, the foundation is opening its new exhibition space in autumn 2011, relocating the recently closed Temporäre Kunsthalle Berlin to Vienna. The mission of the new space is expressing T-B A21's vision to act as an agent of transformation, to participate actively in the formulation of our environments and social spaces and to create a venue for dialogue and engagement in Vienna.

Hosted by
The City of Vienna, its Mayor Dr. Michael Häupl, Vice-Mayor and City Council for Urban Development Mag. Maria Vassilakou, Vienna's 3rd District and its Mayor Erich Hohenberger, and Vienna's Parks and Gardens and its Director Ing. Rainer Weisgram

Sponsored by the Vienna Insurance Group