Produced by Migros is a first-rate selection of works from the collection and at the same time placing its own exhibitions of recent years in a broader context. Sculptures, films, paintings and photographs are issues of sociopolitical relevance and aspects such as performativity and spatiality. In Gardar Eide Einarsson's 'Power Has a Fragrance', the artist examines fundamental structures of social conflicts in modern societies. His motifs consist of fragments, excerpts from texts, pictures or films, as well as coats of arms, signs and symbols. 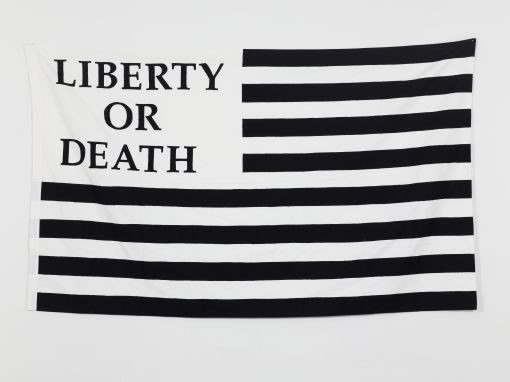 Starting on 25 June 2011, Kunsthalle Fridericianum presents with Produced by Migros a first-rate selection of important works from the collection of the migros museum für gegenwartskunst Zürich and is thereby placing its own exhibitions of recent years in a broader context. At the same time Gardar Eide Einarsson shows his large exhibition Power Has a Fragrance including a number of works allocated between Minimal and Concept Art, which are operating with images referring to cultural signs and symbols and thus dealing with an idea of how the world is mediated.

Major works by artists such as Maurizio Cattelan, Christoph Büchel, Cady Noland, Urs Fischer, Douglas Gordon, Olaf Nicolai, Rirkrit Tiravanija, Christine Borland, Gustav Metzger and Christopher Wool are included in the collection at the migros museum für gegenwartskunst in Zurich. The works were brought together through funding from the so-called Culture Percentage* of the Swiss retail giant Migros.

With Produced by Migros, Kunsthalle Fridericianum is presenting a first-rate selection of important works from the collection and at the same time placing its own exhibitions of recent years in a broader context. Room-sized installations, some of which come directly from exhibitions curated by the first two directors of the Migros collection, Rein Wolfs and Heike Munder, are supplemented by selected sculptures, films, paintings and photographs. At the centre of the show are issues of sociopolitical relevance and aspects such as performativity and spatiality. There are references to Kassel in the show, especially with Maurizio Cattelan’s sculptural reminiscence of Joseph Beuys: it seems as though the artist has decided to return to the Fridericianum for a while. For the Kassel exhibition, which will be jointly curated by Rein Wolfs and Heike Munder, the curators made a selection from purchases of the last 20 years. The collection has been built up since the end of the 1970s based on the highest international criteria. In 1977, the Halle für internationale neue Kunst (InK) was founded, Zurich’s first modern art gallery, albeit a provisional one. Its director Urs Raussmüller launched American Minimal and Concept Art in Switzerland and began collecting this art on behalf of the Federation of Migros Cooperatives. After the premises of InK had to switch to other uses in 1981, it was not until 1996 that Arina Kowner, together with Rein Wolfs, launched the migros museum für gegenwartskunst in the former Löwenbräu production site. Since the migros museum für gegenwartskunst was founded, collecting has been directly linked to the museum’s exhibition activities. Many exhibitions have been closely related to artistic production and have been quite expansive. The collection has developed in line with this aim and today includes a number of complex works that are not always easy to handle in terms of conservation and logistics. In addition, they are highly context-related: many are gestural works conveying an attitude of commitment and reflecting a contemporary human condition.

The exhibition at Kunsthalle Fridericianum is devoted to issues around the relationship between institution, art and reality. Among the central works in the show are large spatial pieces such as a usable seating landscape by Olaf Nicolai based on a painting by Max Bill, an installation produced for the migros museum für gegenwartskunst by Angela Bulloch, a space-dominating sculpture by Urs Fischer and an installation by Banks Violette. These exhibits are flanked and rounded off by important works of some of their artistic forebears, including Gustav Metzger, Cady Noland and Christopher Wool. Paintings by Marlene Dumas and Olivier Mosset, photographs by Phil Collins and Jens Haaning, a film by Marijke van Warmerdam and sculptures by Valentin Carron complete the thematic background. Besides a key work from Christine Borland’s oeuvre, an almost complete replica of the exhibition by Douglas Gordon at the migros museum für gegenwartskunst in 1996 will also be on view. The exhibition will additionally include performative works by Christoph Büchel, San Keller and Daniel Knorr that deal primarily with social issues, as well as a sculpture by Maurizio Cattelan that revolutionized the museum and its conception in the year 2000.

Due to the special genesis and distinctive status of Migros as one of Switzerland’s largest private promoters of culture, the collection at the migros museum für gegenwartskunst can also be seen as a programmatic statement, or even as a “third way” in the discussion about company collections, private museums and the significance of public art collections. In 2008, the migros museum für gegenwartskunst published a catalogue providing detailed documentation of the collection up until then. In addition to numerous pictures and texts accompanying the individual works, longer essays by Tom Holert, Jan Verwoert, Tirdad Zolghadr, Astrid Wege, Philip Ursprung, and Dan Fox focus on the issue of collecting contemporary art.

* The Migros Culture Percentage (Migros Kulturprozent) is a voluntary commitment of Migros, Switzerland’s largest retailer, in the areas of culture, society, education, leisure and business. The Migros Culture Percentage has also been long fostered the migros museum für gegenwartskunst; its professional collecting activities date back to the 1970s and the museum opened in Zurich in 1996.

With his art Gardar Eide Einarsson examines fundamental structures of social conflicts in modern societies based on the interplay between authority and rebellion. He focuses on expressions of power, on control and suppression, on methods and manifestations of sub- and countercultures, as well as on individual people who gained international renown as dictators, terrorists or mass murderers.

While Einarsson’s preferred artistic media are very varied, ranging from painting and graphic art, to installation, sculpture, ready-made objects and flags, to film and photography, their formal and visual appearance is very reduced. Minimal Art and the conceptual art of the 1960s and 70s are clearly his art-historical references. Einarsson continues the aims of these movements by linking simple, plain form with weighty content that opens up several levels. The artist’s motifs consist of fragments, excerpts from texts, pictures or films, as well as coats of arms, signs and symbols, which he enlarges to give them special significance. The sources of these motifs come from everyday life and popular media such as the Internet, films and literature, including comics. Thus, viewers find in his work suspended speech bubbles with no body next to them, and statements in the form of graffiti or neon writing taken from popular car stickers. This formal minimalism is visually underpinned by the frequently occurring opposition between black and white, particularly in the artist’s paintings. The geometric shapes with plain iconography turn out to be heraldic signs (Untitled (Family Crest), 2008), details from book cover motifs (The Meaning of Limited War, 2010 and Caligula (Incitatus), 2010) or sketches of violent crimes, such as that of the so-called Oklahoma Bomber, who set off a bomb in front of the Murrah Federal Building in Oklahoma City in 1995 (Untitled (Barrels), 2006).

With his artistic method of precisely and carefully choosing a detail, an excerpt, or a fragment, Gardar Eide Einarsson shows himself to be a conscientious researcher of social (mis)relationships and of the frequent criminal phenomena resulting from them. Attentive und thoughtful, but with straightforward logical consistency, he presents themes that give viewers food for thought and that open up complex facets. For example, the powerful neon sculpture Caligula (2010) radiates bright letters into the space. After viewers decipher the name of the famous Roman emperor and tyrant, they find out that the work was modelled on the neon writing of a Mexican striptease club.

In his solo exhibition Power Has a Fragrance, Gardar Eide Einarsson creates a scenario that illustrates social conflicts between individuals and the societies in which they live and that focuses on authority and alienation, in whose context feelings of fear and paranoia are embedded. Paintings and a number of graphic works and prints interact with sculptures, lightboxes and neon writing, as well as spacious installations. In addition to these works from the artist’s most recent work phase, Einarsson is producing a new billboard installation specifically for the Kassel show. The large number of works in the installation is expressly conceived as a unit, so that the focus is not on the individual works but on the interplay between them. Therefore the exhibition can also be viewed as a collage whose fragments overlay and supplement one another, creating new layers of connections. Power Has a Fragrance does not deal with an explicit social system, but rather makes use of diverse events and phenomena that have attained global import and impact. Thus, Einarsson engages with the USA and Japan – the artist’s living environments – as well as the most recent battles on the streets of Bangkok.

The exhibition travelled from the Astrup Fearnley Museum of Modern Art in Oslo (2010) to the Reykjavik Art Museum (2010) and the Bonniers Konsthall in Stockholm (2011), before opening at the Kunsthalle Fridericianum on June 24, 2011. The show is redesigned at each venue.

The exhibition is accompanied by a catalogue.

Wednesday 6 July 2011
InsideOut Discussion
In the context of the exhibition Produced by Migros, there will be a discussion between Olaf Nicolai, Dr. Mario Kramer (director of the MMK Collection, Frankfurt) and Rein Wolfs on Wednesday 6 July at 6 p.m. Sitting on Nicolai’s installation Landschaft, metaphysisch und konkret (nach Max Bill) the participants will discuss public, corporate and private collecting, Max Bill’s art and "the state of the art".

On-Curating
The new issue of the online magazine On-Curating is now available and documents a large part of the symposium Institution as Medium. Curating as Institutional Critique? which was held in Kassel in March 2009 and co-organized by Kunsthalle Fridericianum and the Postgraduate Program in Curating, Institute for Cultural Studies in the Arts, Zurich University of the Arts (ZHdK). The two-day symposium dealt with the possibilities, opportunities, as well as the limitations of critical curating. The guests included renowned exhibition theorists and practitioners such as Maria Lind, Oliver Marchart and Søren Grammel. Their contributions are documented in the current issue no.8 and one of the following issues of On-Curating and can be read free of charge at www.on-curating.org.

You and your friends are cordially invited to attend the opening of the exhibitions on Friday 24 June 2011 at 7 p.m.