Alchemy of the Everyday. Marking the 150th birthday of Rudolf Steiner (1861-1925), MAK will show a comprehensive exhibition showcasing one of the 20th century's most influential and likewise contro versial reformers. More than 200 works, comprising texts, art works, drawings, models, and furniture designs; divided into themes, the show approaches Steiner's extensive oeuvre, creating ties to social and artistic movements from his era and today. 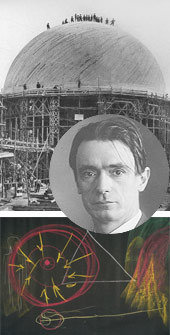 To mark the 150th birthday of Rudolf Steiner (1861–1925), the MAK will be presenting the exhibition “Rudolf Steiner – Alchemy of the Everyday,” which will survey the comprehensive oeuvre of this influential 20th-century reformer. Steiner put his entire worldview, a “secret science” based in anthroposophy, into practice as innovative approaches to everyday life which continue to be followed all over the world today: examples include Waldorf pedagogy, biodynamic agriculture, natural cosmetics and natural medicine, as well as aspects of banking. With the second Goetheanum in Dornach near Basel, a concrete structure which was quite radical for the era in which it was built, Steiner created a milestone of organic architecture which is visible far and wide. Although he has also been ridiculed as an “occultist” and a “quack,” as well as criticized for certain racist and anti-Semitic interpretations, Steiner’s controversial oeuvre is currently experiencing a renaissance.

“Rudolf Steiner – Alchemy of the Everyday,” conceived by the Vitra Design Museum in Weil am Rhein and the art museums of Wolfsburg and Stuttgart, brings together over 200 individual items to present Austria’s first major retrospective showing on Steiner. Following stops in Wolfsburg and Stuttgart, the exhibition’s presentation in Vienna—where Steiner spent the years between 1879 and 1890, a period which included his university studies—will place these items in a new context. Divided into the chapters “Context,” “Metamorphoses” and “Practice,” it approaches Steiner’s comprehensive oeuvre and illuminates relationships with the societal and artistic trends of his era. “This exhibition,” says Martina Kandeler-Fritsch, Acting Director of the MAK, “makes it possible to take in an unprejudiced view of Steiner’s universalist body of works while also highlighting impulses which his work has provided to contemporary art, architecture and design.”

Before the backdrop of the societal and ideological shifts taking place as modernism dawned, Steiner proceeded to develop a worldview that ran counter to rationalism; he developed his various ideas on the basis of his own philosophy, called “anthrosophy,” which regards human beings in their relationship with the supernatural and places the “ego” at the center. In doing so, he joined the intellectual school of German idealism and its interest in Goethe with the natural science discoveries of his era, Far-Eastern teachings and Gnosticism to formulate a “philosophy of freedom.” Out of Art Nouveau, Cubism and expressionism, as well as the “Lebensreform” [life reform] movement around 1900, Steiner distilled an entirely new aesthetics of everyday life; he then went about applying it to architecture, design, stage art and other areas. Steiner’s “Blackboard Drawings,” to be displayed in this exhibition, show the breadth of his complex lectures which covered his own theory of evolution as well as topics such as the "solution to the social question" and guidelines for farming.

Exhibits on display will include 45 pieces of furniture, 46 models, 18 sculptures and over 100 original drawings and plans, as well as posters and Steiner’s correspondence with personalities including Else Lasker-Schüler, Franz Kafka, Piet Mondrian and Richard Neutra. Rare pieces of documentation, including early expressionist films and newsreel excerpts, as well as works by Wassily Kandinsky, Lyonel Feininger, Antoni Gaudí, Erich Mendelsohn and Frank Lloyd Wright make visible how Steiner’s oeuvre and his era mutually influenced one another. Among the exhibition’s highlights will be a monumental model of the Goetheanum as well as two polygonal “color chambers” designed by Steiner in 1913 and reconstructed specifically for this exhibition as rooms which visitors can enter. Alongside Joseph Bueys, whose reading of Steiner left clear marks on his oeuvre, the exhibition will include works by 13 further contemporary artists, architects and designers including Olafur Eliasson, Herzog & de Meuron, Konstantin Grcic and Jerszy Seymour—figures who, up until now, have not been placed or interpreted in this context. The MAK exhibition will also explore Joseph Binder’s interest in Steiner and thus a new facet of the graphic designer Binder’s artistic legacy, which is held by the MAK.

In this combination, the items on display will present a view of an individual whose worldview and aesthetics—while they may polarize—are of undisputed significance for cultural history and which universalist approach is commensurate with that of the MAK. Steiner even appears to have anticipated certain trends of present-day design and architecture—such as using growth processes and organic forms as a source of inspiration, an approach which is currently gaining in popularity. In the present era of lively discussions pertaining to ecology and social responsibility, to the spiritual search for meaning and to a derailed economic system, a holistic worldview such as Steiner’s does indeed offer certain impulses.

The majority of the loan items come from the Rudolf Steiner Archives and from the art collection of the Goetheanum in Dornach, Switzerland, both of which provided essential support in this exhibition’s preparation. The exhibition is also supported by the German Federal Cultural Foundation, the Mahle Foundation and the foundation Iona Stichting, as well as by Wala and Weleda.

The exhibition “Rudolf Steiner – Alchemy of the Everyday” will be joined by a wide array of supplementary events. Details on the accompanying program will be available at www.MAK.at.

The exhibition is accompanied by the catalogue "RUDOLF STEINER - Alchemy of the Everyday", edited by Mateo Kries and Alexander von Vegesack, with a preface by Martina Kandeler-Fritsch, German, 338 pages, Vitra Design Museum, Weil/Rhein 2011, € 45