Laboratory of the Future

A comprehensive international art program. It is launched by the project Regress-Progress, which focuses on two questions: Can we expect a progress, a development of the capitalist system of production in the foreseeable future? - or rather - Can we expect a regress, which might in fact prove felicitous? During Act 1, the participating artists realize their solo projects (Pawel Althamer, Cai Guo-Qiang) or collaborative ones (Simon Leung invited by Rirkrit Tiravanija, raumlaborberlin), whereas the curators prepared collective exhibitions: Where Is the Green Rabbit? (Ewa Gorzadek) and The Landscape of the Future (Fabio Cavallucci). 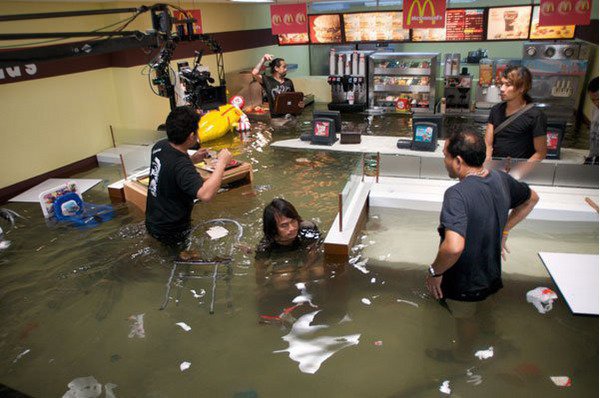 The Laboratory of the Future is a comprehensive international art program, established by the Centre for Contemporary Art Ujazdowski Castle, directed towards the future. It is launched by the project REGRESS-PROGRESS, which focuses on two questions: “Can we expect a progress, a development of the capitalist system of production in the foreseeable future?” or rather “Can we expect a regress, which might in fact prove felicitous?”

The REGRESS-PROGRESS project, held until 15 January 2012, is meant to develop dynamically and change organically, responding to the probability and fortuity of real life. During the first stage, the participating artists realize their solo projects (Paweł Althamer, Cai Guo-Qiang) or collaborative ones (Simon Leung invited by Rirkrit Tiravanija, raumlaborberlin), whereas the curators prepared collective exhibitions: Where Is the Green Rabbit? (Ewa Gorządek) and The Landscape of the Future (Fabio Cavallucci).

In the Paweł Althamer project Wall (2011) held in the Wola district in Warsaw, we see children from neighbouring schools – the Polish Waldorf school and the Jewish Lauder-Morash one – separated by a wall. Children are our future and they will speak about it: they will design a footbridge that will join both their schools. New York-based Chinese Cai Guo-Qiang is going to show the intriguing project Summer Solstice (2011), where a museum becomes a gigantic pot for birches. The artists – Simon Leung and, this time as a curator, Rirkrit Tiravanija – have chosen Warren Niesluchowski as the protagonist of the WAW project (2010-11); an eccentric nomad, an artistic globetrotter and a homeless citizen of the world, Niesluchowski appreciates most of all the value of hospitality. Thanks to an installation Grated Futures Getting Behind the Scenes (2011) by the raumlaborberlin collective of architects, the biggest exhibition hall of the Centre is converted until the end of the project into an auditorium, arranged as if from the point of view of the world in the wake of an oil shock. The entry into the hall leads through time tunnels; there is a table here, a garden with a terrace, an apartment landscape, and a space with a “machine for dreams”.

Relations between art and science are addressed in the exhibition Where Is the Green Rabbit? A green rabbit by the name of Alba, tailor-made for US artist Eduardo Kac, was introduced for the first time during the 2000 Avignon Festival. Its fur, after a gene of green fluorescence was grafted from the medusa Aequorea victoria to the rabbit’s genome, gave off a magnificent green sheen. The ironic work Reaching the Stars (2011) by Hubert Czerepok sums up the artist’s thorough research of the Polish space program of the 1960s; he was inspired here by an idea put forth recently by Polish parliamentarians calling for a resumption of studies and tests connected with the program. Der Lauf der Dinge/ The Way Things Go (1987) by the Swiss artist duo Fischli & Weiss is a grotesque and thrilling film that depicts a long chain reaction of successive self-destructions with banal objects cast in the main roles; presenting diverse ways of energy transfer between objects and systems, it is at the same time a metaphor of life. In Vadim Fishkin’s installation Tour en l’air (2009) silver balloon-stars dance in space to the accompaniment of a Tchaikovsky waltz, which evokes memories of The Space Odyssey and the music of the heavenly spheres; science and technology go hand in hand here with absurd poetry. The film collage Journey to the Moon (2003) by William Kentridge, where the artist assumes the role of a scientist dreaming about distant unknown worlds and finally takes a trip in his imagination only, without leaving his own studio, is an homage paid to the avant-garde French director George Méliès. Robert Kuśmirowski’s installation DATAmatic880 (2007), whose title is a reference to the famous computer from the 1960s, recreates a fictional research laboratory of a time machine from the legendary era of the first cybernetic inventions, equipped with the missing element five decades belatedly. In a series of collages Aim at the Stars (2008) Aleksandra Mir combines traditional images of Christian iconography (so-called holy pictures) with photos of spacecraft and telescope images of the Universe; religion and science are two paths of seeking answers to questions about the beginning of creation, the meaning and end of life. The object Quantum Camera (2010) by Steven Pippin is a still camera where the process of making pictures takes place within a closed circuit, for its own sake. It is accompanied by a series of dramatic pictures where cameras record the moment of their own destruction as well as the artist’s commentary Photographic Philosophical Treatise (The End of Photography). In The Golden Institute (2009) Sascha Pohflepp introduces a futurological fantasy: Jimmy Carter becomes US President in 1980 and launches an intensive program of seeking sources of natural energy. The Golden Institute for Energy in Colorado is established which has at its disposal unlimited funds to make the United States the world’s leader of energy sources.

The exhibition titled The Landscape of the Future evokes a premonition of a future cultural landscape and our future perception of it. Michał Budny amazes viewers with his realistic installation in the scale 1:1 (untitled (fence), 2011); it features a stolen fragment of a natural landscape. After cutting down a few trees and processing them, the wood was returned to the environment: a wooden shed was put up. Later, when it was no longer used, it became an object that could once again return to the landscape and fulfill another function within it. In his set of photographs from the Dough Portraits series (2008) Søren Dahlgaard offers a wide panorama of 100 both dehumanised and individualised human types; all of them share one element: instead of faces they carry differently shaped raw dough on their heads. Christian Falsnaes shows a video You’re My Heart, You’re My Soul (2009), a record of his performance, an unpretentious dancing journey through the degraded suburbs of Hanoi to the karaoke accompaniment of the Modern Talking song. Invoking Russian Constructivism, in the installation Bend City (Red) (2008) Carlos Garaicoa shows a cardboard city model that brings to mind socialist planning economy and a children’s book with cut-outs, and explores the colour red. Endless Ends by Elodie Pong (2009) is an installation with a video in a loop, composed of concluding scenes of movies with the inscription “The End”; is the end a new beginning? Katarzyna Przezwańska moves between geometric abstraction and attentive observation of nature, now looking through a magnifying glass at a leaf. In her work Leaf (2011) a dried leaf is painted light green. She also designed a colourful futurist suit of taffeta; a reference to Giacomo Balla, it has a small stone instead of a button and breaks the dress code (Suit, 2011) - the curator will be wearing the suit during the launch of the exhibit. The architecture designed by François Roche is hybrid and organic; a city from the work An architecture “des humeurs” (2010) takes the form of a monstrous robotized spider. The film Flooded McDonald’s (2008) by Superflex is an extremely touching and at the same time realistic and oniric image of a global network restaurant submerged by water. Nico Vascellari in his sound installation (untitled (forest); 2011) presents a massive audio landscape: through a modified recorder the tape was recorded in a forest, leveling sounds for two weeks.
Now, in the exhibition space, the tape will slowly lose the recording of natural sounds and will take the noise of the room.

The launch of the program will be accompanied by music actions on and around the premises of the Castle and a concert of The Fruits of the Future Orchestra (Music Program – Curator: Andrzej Załęski). KINO.LATO (Curators: Katarzyna Boratyn, Michał Matuszewski) will introduce the program PROGRESS in July, and the program REGRESS in August. Education Program (curator: Joanna Rentowska) will present Cabinet of Curiosities of the Future.

All information will be provided on an ongoing basis by the new magazine Tranzystor cswzu (editor-in-chief: Grzegorz Borkowski).