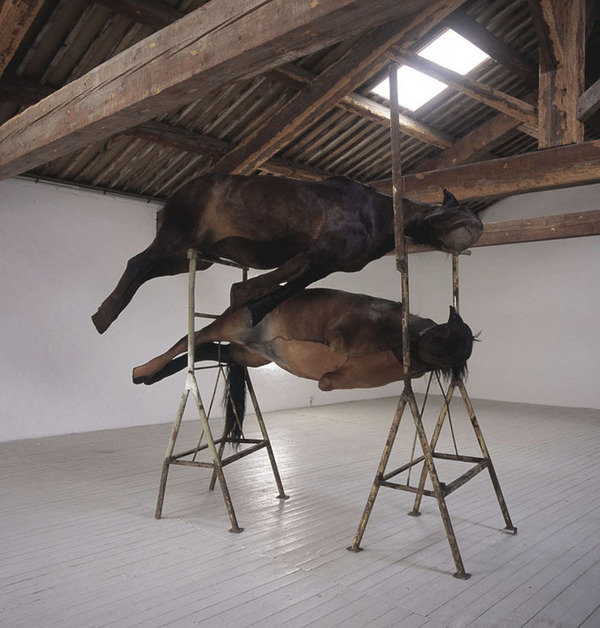 One of the most acclaimed artists of his generation, John Currin makes delightfully perverse figurative paintings, which enchant and repel in equal measure. His art, which constantly evades categorization, pinpoints the moment where sublime beauty and the grotesque are held in productive tension. An irreverent mannerist who brings a satirical savvy to contemporary portraiture, Currin has been confounding and seducing critics and audiences for over two decades. His work is characterized by a meticulous, old-masterly technique and an unfashionable investment in classical painting traditions commingling with other representational languages drawn from popular culture, including movies, pinups and Scandinavian pornography. These different languages complicate already awkward or "wrong" paintings, visibly and invisibly battling on the canvas.

Berlinde De Bruyckere came to international prominence in 2003 at the Venice Biennale where she exhibited The Black Horse—a monumental, abjectly deformed figure covered in glossy horse hide. Before this important exposure in Venice, she exhibited the dramatic installation In Flanders Fields, a startling and poignant commentary on World War I, consisting of five life-size sculptures of dead horses littering an imaginary battlefield. She specialises in sculpture in various media including wax, wood, wool, iron, lead, horse skin and hair. Be they human, equine or vegetal, her nightmarish sculptural displacements conjure and reflect upon suffering and vulnerability, love and brutality, loneliness and memory. She seeks both desire and destruction in works that command rapt attention and involuntary revulsion. De Bruyckere's painstakingly rendered resin forms covered in layers of pigmented wax or horse skin dramatize the traumatic and painful scars of existence and the effects of debilitation, both corporeal and psychic.

Berlinde De Bruyckere (b. 1964, Ghent, Belgium) has participated in numerous international surveys including the Berlin Biennale (2006) and After Nature at the New Museum in New York (2008). She is the subject of a major exhibition called Mysterium Leib: Berlinde De Bruyckere in Dialogue with Cranach and Pasolini at the Moritzburg Foundation in Halle, Germany (2011). She has had several exhibitions at her gallery Hauser and Wirth in Zurich, London and New York.