Has the Film Already Started? is a new suite of collection galleries which highlights ways in which ideas of performance have come to occupy a defining place in art of the last 30 years. These major works explore different approaches to the use of narrative, tableaux and found objects. Glasgow-based artist Corin Sworn presents Endless Renovation, an installation inspired by a chance discovery of a collection of slides in a skip outside the artist's house. A new photography display at Tate Britain brings together Roger Fenton's (1819-1869) richly detailed Orientalist images from the 1850s. 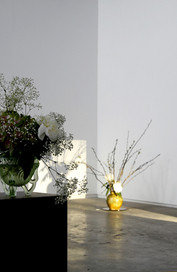 Glasgow-based artist Corin Sworn presents Endless Renovation, an installation inspired by a chance discovery of a collection of slides in a skip outside the artist’s house. Meditating on the origins of the slides, the narrative combines meandering thoughts with excerpts from poetry and writings.

A new photography display at Tate Britain brings together Roger Fenton’s (1819-1869) richly detailed Orientalist images from the 1850s. A pioneer of British photography and one of the first war photographers, Fenton was best known for his work documenting the Crimean War. He also helped found the Photographic Society in 1853 (later the Royal Society of Photography) and was revered in his time, with admirers including Queen Victoria and Prince Albert. With significant loans from the Wilson Centre for Photography, this display offers the chance to see the largest group of Fenton’s Orientalist works to have been shown together to date.

The photographs included show Fenton’s fascination with the Orientalist genre which he became familiar with whilst studying in Paris in the 1840s. At the time, the richly suggestive detail of costumes and scenery meant that this series of photographs were mistaken for accurate documentation of life in the Middle East when in fact they were artistic fantasies created in Fenton’s London studio.

Fenton worked closely with several London-based Orientalist painters to develop this style, including J.F.Lewis, Carl Haag and Frank Dillon. Dillon seems to have been closely involved in the creation of these images, and appears in a couple of them. In this display, viewers can see Fenton’s work displayed alongside a few examples of paintings by these contemporaries as well as in the context of photographers from the time who traveled to the Middle East. The display invites interesting comparisons between the style and the costume of these Orientalist studies of Morocco and the Middle East to Fenton’s own work, created in London.

Fenton was born in 1819 in Lancashire. His career as a photographer, though short, was varied in his work both in Britain and around Europe. In 1852 he made what are believed to be the first photographs of Russia and the Kremlin. Fenton was employed as the British Museum’s official photographer, the first photographer to ever hold such a position in any museum worldwide. Upon his return from the Crimea in 1855, Fenton travelled throughout England, Scotland, and Wales, making ambitious studies of the countryside, cathedrals and country houses. As his career progressed, Fenton pushed himself to tackle ever greater challenges, striving to overcome technical difficulties in his photographs of clouds and the landscape or the interiors of darkly-lit cathedrals.

This display was curated by Ian Warrell, Curator (18th &19th century), Tate Britain and Polly Fleury at the Wilson Centre for Photography.

Significant new acquisitions to Tate’s Collection by some of Britain’s most innovative contemporary artists go on display at Tate Britain today. Presented in a newly re-hung suite of contemporary galleries, works by artists including Marc Camille Chaimowicz, Enrico David, Cathy Wilkes and David Musgrave will be shown for the first time at Tate Britain. They will form part of an atmospheric installation, entitled Has the film already started?, which highlights the role of scene-setting and performance in British Art from the 1970s to the present day.

Highlights among the new acquisitions include Marc Camille Chaimowicz’s groundbreaking Partial Eclipse 1980–2006, for which there will be a weekly live performance every Saturday afternoon at 15.00, and Cathy Wilkes’s (We are) Pro Choice 2008, a large-scale installation which brings together discarded everyday objects to create an unsettling tableau. A further group of recent acquisitions by artists including David Musgrave and Enrico David are also brought together to show ways in which the human body has been evoked and transformed through a range of collaged and assembled material.

Has the film already started? will trace the story of how performance and related ideas have come to occupy a defining place in the art of the past 30 years. It will show how these ideas have been transmitted across different generations between teachers and students as well as in reference to earlier artists. Displays of new acquisitions will be complemented by existing collection displays of contemporary art at Tate Britain which explore narrative and found objects including Mike Nelson’s labyrinthine The Coral Reef 2000 and recent work by Cerith Wyn Evans, from which the title Has the film already started? is taken.

Material recently acquired by Tate Archive has also been selected to explore Genesis P-Orridge and Cosey Fanni Tutti’s provocative activity in the 1970s, including the infamous Prostitution exhibition at the ICA in 1976. Their work under the name COUM Transmissions has been powerfully influential and illustrates the complex relationship between physical performance and its documentation, representation and legacy.

An installation by Corin Sworn is shown as part of Tate Britain's Art Now programme of emerging British art. In the first major display of her work in London, Sworn presents Endless Renovation 2010, evolved from the chance discovery of a collection of slides and a diary in a skip outside the artist’s house. Sworn’s piece reflects her interest in the ways in which objects are borrowed, appropriated and reconfigured to tell various stories.