By presenting different artistic strategies, the exhibition speaks about a society that, in full disregard of ethical principles, decides on the life and death of people. The works of the thirteen artists presented addresses the issue of the continuity and reality of wars, of their permanency, of the emergence of ever new crisis areas and conflicts, of the incomprehensibility of war and of the urgency of awareness and remembrance. 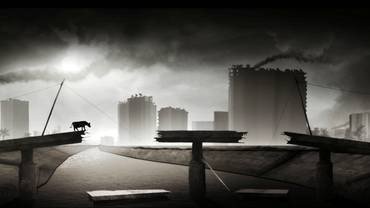 One of the fundamental questions of contemporary society is: what are the reasons for wars and could these last be prevented? Is this at all possible in a society with the existing political, economic and corporate relations of power and hierarchies which makes it a society of imposed imperial order?
The exhibition Continuity deals with the questions of war, genocide and memory. Through artistic projects with a direct bearing on World War II, the Israeli-Palestinian conflict, the war in Iraq, Bosnia, Afghanistan and the World War II and Srebrenica genocides, the exhibition will try to point at the phenomenon of permanent global war, where peace is manifested only as an interim period between states of war.

The war problematics will be tackled from many aspects: through research and reconstruction of traumatic events; through focusing on the consequences of war that have left their mark on the people, the landscape and the architecture; through exploring how history and conflictual situations are inscribed into a space, thus becoming part of its identity; through problematizing the media representation of war, and through testimonies and stories of the people who have been through war.
By presenting different artistic strategies, the exhibition will speak about a society that, in full disregard of ethical principles, decides on the life and death of people, changing wars into a self-interested global enforcement of political goals by any means necessary, and covers up its responsibility for the destroyed lives – which concerns not only those involved, but also the others who collaborate in wars by trading in arms or in some other 'invisible' way, supporting and legitimating wars to their own profit and political interests – in a political lie despite our knowing. The works of the thirteen artists presented at the exhibition will address the issue of the continuity and reality of wars, of their permanency, of the emergence of ever new crisis areas and conflicts, of the incomprehensibility of war and, last but not least, of the urgency of awareness and remembrance (in the 19th and 20th centuries, approx. 205 million people died as a result of war and genocide).

Memorial (2009), an animation and video installation by Iraqi artist Adel Abidin is based on a real event from 1991, when American forces bombarded Baghdad. By merging fiction and reality, the work speaks about the irrepressible need of proximity, appurtenance and connectedness, and about a destroyed city as well.
The installation A Mistake (2010) by Celje photographer Tomaž Črnej, featuring a series of photographs of Auschwitz and of a mass grave in Laško pri Celju, where, after the World War II, hundreds of prisoners of war and civilians were killed, speaks about spaces marked by history, genocide and collective memory. In her video work Sniper (2007), Adela Jušić tries to come to terms with her own childhood lived in the besieged city of Sarajevo, and with the moment when she, as a 10-year-old girl, was confronted with a major loss in her life – the death of her father.
The video installation Raw Material (2010) by Celje artist Maja Hodošček deals with the psychological suffering of war veterans, post-trauma stress, anxiety and fear of people. The spectator is presented with the experience of a young American soldier in the Iraq war.

Occupo, a spatial installation by Mladen Miljanović, applies the military visual vocabulary to the artistic context, ironically problematizing the militarization of society.
The series of photographs Burke + Norfolk: Photographs from the War in Afghanistan is the result of 'the artistic collaboration' between John Burke, a war photographer during the Second Anglo-Afghan War (1878–80), and Simon Norfolk, who travelled to Afghanistan in 2010 to follow Burke's path, where he created a series of photographs of the current situation. The work addresses the issue of continuity of conflicts and imperialism in a country stricken with poverty.
The series of photographs I'm Here (2004) by Israeli designer David Tartakover, where the artist's figure is digitally inserted into the reportage photographs of different places and events, speaks about the consequences of the Israeli occupation, about the taking on of responsibility and about life in a space full of conflicts.

Helmbrecht's Walk (1998–2003) by the New York artist Susan Silas is an accurate reconstruction of a forced march of 580 Jewish prisoners after World War II. The work, a visual representation of the 225-mile-long walk from a camp in Germany to Czechoslovakia that brought about the death of 95 women, is a collection of photographs and writings created by the artist.
Milica Tomić, in her video Road Safety (2007–08), travels to Srebrenica, where at least 8,000 Muslim men and boys were killed in 1995. The journey into the centre of the post-genocide trauma, into the world of women without men, villages without people, is an attempt at understanding how it is possible to survive and continue on with life despite irreplaceable loss.
Stefanos Tsivopoulos's video installation The Interview (2007) moves between reality and reconstruction, exploring questions of representations of history, personal memory, as well as interpretation and the media-mediated reality.
The photograph Kočevski Rog by Bojan Salaj is a part of the series of photographs Landscapes (2008-), with snapshots of spots from the Slovenian landscape that represent the symbols of Slovenian national identity, addresses the question of rethinking, reevaluating and understanding history.

In his work 80064 (2004), the artist Artur Zmijewski convinces an ex prisoner of a concentration camp in Auschwitz to renovate his tattooed number. The work speaks about constraint and authority, as well as about conformation and subjugation as the only possible means of survival.
Dalibor Bori Zupančič's installation It Lasts, It Lasts, It Lasts deals with the permanent state of war, addressing at the same time the mass liquidation of political prisoners in the courtyard of the Stari Pisker in Celje, where, from September 1941 to August 1942, in six shootings altogether, 374 people were killed by the occupiers without any judgment being made against them.