'Concealed/Revealed' is the fourth exhibition in the series celebrating the Alte Pinakothek's 175th anniversary. It is centred on eight prominent works by Albrecht Altdorfer, Lucas Granach and Albrecht Durer. The original paintings and the infrared reflectographs will be shown on a scale of 1:1 next to each other, enabling a direct comparison and a fascinating insight into Altdorfer's, Cranach's and Durer's creative works. 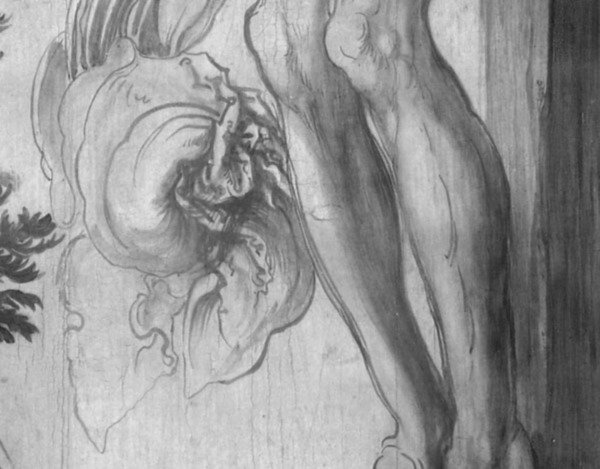 “Concealed/Revealed” is the fourth exhibition in the series celebrating the Alte Pinakothek’s 175th anniversary. The enigmatic title stands for a subject of enormous multiplicity.

Infrared reflectographs of underdrawings that – apart from a few exceptions – have never been seen before by a general audience, will be on display. The Alte Pinakothek’s anniversary year is the perfect occasion to exhibit the best examples produced by digital infrared reflectography in the field of German Renaissance painting to a broad public.

Following two exhibitions with an emphasis on the history of the collections, “Vermeer in Munich” and “Cranach in Bavaria” – and the exhibition “Treasures from the Depot” which can be seen throughout the whole anniversary year, focussing on the subject of museum’ taske to preserve cultural treasures– the accent this time is on art technological research that is also usually carried out behind closed doors.

Investigating how an artist works, seeing with his eyes what nobody else has seen for centuries – using technical means it is now possible to make the invisible visible. Infrared reflectography has been used since the late 1960s for investigating painting techniques, having been perfected at the Doerner Institute since the early 1990s through the integration of digital technology – pioneering work at its best.

Infrared reflectography shows how an artist drew compositional sketches – so-called underdrawings – on panel or canvas before starting to paint. A first taste of this was displayed at the Dürer exhibition in 1998. Since then, numerous high-resolution digital infrared photographs of underdrawings have been made, the majority of which have never been on show before.

This exhibition is centred on eight prominent works. The original paintings and the infrared reflectographs will be shown on a scale of 1:1 next to each other, enabling a direct comparison and a fascinating insight into Altdorfer’s, Cranach’s and Dürer’s creative works.

The confidently executed underdrawing for Albrecht Altdorfer’s “Battle of Issus (Alexanderschlacht)” is rendered visible in a fascinating way by infrared reflectography and appears no less magnificent than the painting itself. With “Susanna and the Elders”, visitors to the exhibition will also be able to see how even great artists have to struggle with the problems of perspective.

Visitors will be able to see the considerable precision with which Albrecht Dürer started working on his “Mater Dolorosa” (Mother of Sorrows), one of his earliest works from around 1495, and the absolute perfection of the underdrawing made a few years later for his “Self-Portrait” of around 1500.
Lucas Cranach the Elder’s style of underdrawing is illustrated in two examples from two different phases during his lifetime. The brilliantly executed ‘Crucifixion’ of 1503 that the highly ambitious young artist – still far from routine workshop production – drew and painted entirely in his own hand, is compared and contrasted with the depiction of “Cardinal Albrecht of Brandenburg before Christ on the Cross” completed by artists in his workshop.
Hans Baldung Grien is proven to be a meticulous draughtsman who leaves nothing to chance and whose underdrawing is like a drawing in its own right, being much more precise than necessary.
To round off this selection, a wing of ‘St Sebastian’s Altar’ by the Augsburg painter Hans Holbein can be seen. Holbein reworked it into a ‘parting picture’ for his youngest son, Hans, who had left his native Augsburg a short time earlier, just when it had almost been completed.

The underdrawings do not just provide an insight into individual working methods and processes but are works of art with a beauty of their own – artists’ drawings that are not to be found in any print collection: rendered visible thanks to modern technology.

A catalogue with approx. 120 pages includes illustrations of all paintings and infrared reflectographs, many with details shown in close up, and commentaries by Martin Schawe on the individual works. The introduction by Andreas Burmester describes the hundred-year-old history of technical photography at the Pinakothek museums and the development of digital infrared reflectography at the Doerner Institut.

In the exhibition Albrecht Dürer’s “Mater Dolorosa” will be on display in the Alte Pinakothek for the first time in 23 years following the successful completion of its restoration, having been severely damaged in an attack in 1988.

Further information and pictorial material Tine Nehler tel. 089 23805-118 or via e-mail to presse@pinakothek.de