'A fist full of paint' will feature new works including paintings, drawings and limited-edition prints by Burning Candy crew as well as an on-going screening of exclusive un-released footage from the B.C produced DOTS film. Furthermore the show presents the aftermath of a western style 'showdown' using paint-filled fire extinguishers, a metaphor of the competitive, fun and extreme nature of the graffiti world. 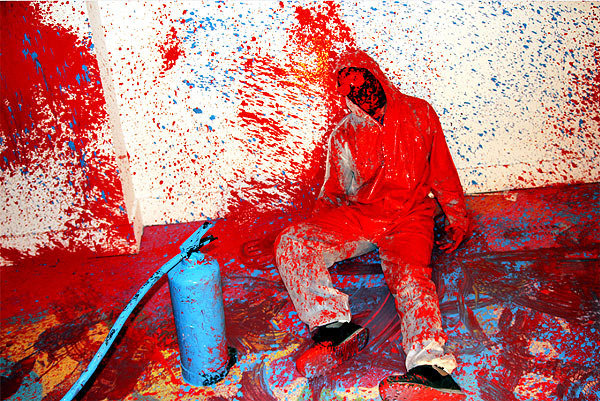 Tony’s is pleased to present “A FIST FULL OF PAINT", an exhibition by East London’s notorious Burning Candy (B.C.) crew.

The exhibition will centre on presenting the aftermath of a western style “showdown” using paint-filled fire extinguishers. Two B.C. members were let loose in a wild, head to head, battle using high pressured paint, and leaving behind the gestural process of their actions, as well as a filmed documentary, reflecting the bigger picture of the competitive, fun and extreme nature of the graffiti world. Tony’s will stage this performative and yet subversive encounter, turning what may at once be perceived as an act of vandalism into a playful comment on the art world and its systems of presentation.

The show will feature new works including paintings, drawings and limited-edition prints as well as an on-going screening of exclusive un-released footage from the B.C produced DOTS film. For this occasion, twenty limited edition box-sets including the four segments of the film to date, nine prints by the BC crew and a limited edition t-shirt by Mighty Mo will be made available!

Prolific in their home London B.C. have gone on to spread their signature insignias across the United Kingdom and as far as Sweden to Bombay and from Paris to Bangkok, leaving fully covered buildings and walls in their wake. A unifying language can be recognized despite a sense of individualism from each member; no particular style is adhered to and yet, a shared honest and bright design within their work unites them in their perfect rendition of the surrealist exquisite corpse, as well as their common belief in a resistance to the ever increasing corporate sterilisation of urban landscapes.

B.C. have exhibited in a number of high profile exhibitions, and have starred in Channel 4’s 3 Minute Wonder series alongside Blek Le Rat and Pure Evil. Work by B.C. and its members (many of whom studied fine art at institutions including the Royal College of Art) have been featured in the Saatchi Gallery Collection, as well as numerous private collections around the world.