Mondegreen is a new collaborative project between Geoffrey Farmer and Jeremy Millar. Existing over the entire seven week period of the show, the work explores Farmer and Millar's shared fascinations and vocabularies: the slippages that occur in the retelling of a story, how boundaries and split spaces become signifiers of meaning, and the performative acts of ritual that mark out an individual's passage through time. 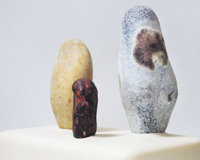 Project Arts Centre is delighted to announce the opening of Mondegreen, a new collaborative project between Geoffrey Farmer and Jeremy Millar.

Mondegreen is the live replaying of a day, performed during the gallery hours of Project Arts Centre. Existing over the entire seven week period of the show, the work explores Farmer and Millar’s shared fascinations and vocabularies: the slippages that occur in the retelling of a story, how boundaries and split spaces become signifiers of meaning, and the performative acts of ritual that mark out an individual’s passage through time.

Among these many strands of interest, this unique collaborative experiment also threads together both artists’ research on the chance operations of John Cage, musique concrète, as well as an underlying interest in James Joyce's Ulysses.

The durational work centres around a score written and conceived by Farmer and Millar. The composition unravels a single day, 9 May 2011, which started and ended with a train journey. Project Arts Centre’s gallery hours have been reconfigured to mirror and bracket this journey’s comings and goings. The composition has been intertwined with structures, objects, and ‘agents’, which interrupt and dislocate through a series of both orchestrated and chance happenings. The recital occurs daily, performed by a designated individual who carries forth the changing scenography and sound components. The ways in which these actions are choreographed are deliberate, established to work between the predefined and the interpretative; a frame creating distance between authorship, control and happenstance.

Mondegreen combines two previously disassociated practices to construct a narrative which is, at once, both specific and enigmatic. Within its careful pacing and structure it hopes to propose parameters of understanding—an awareness that seeks to invoke possibilities for pleasure to arise.

Geoffrey Farmer is an artist living in Vancouver, Canada. His recent solo exhibitions include ‘Let’s Make the Water Turn Black’, REDCAT, Los Angeles, and ‘Bacon’s Not The Only Thing That Is Cured By Hanging From A String’, Casey Kaplan, New York (both 2011); ‘God’s Dice’, Walter Phillips Gallery, The Banff Centre, and ‘The Vampire of Coyoacan’, Museo Experimental El Eco, Mexico (both 2010); and a mid-career retrospective at Musée d'art contemporain de Montréal (2008). Recent group exhibitions include ‘The Garden of Forking Paths’, migros museum für gegenwartskunst, Zurich (2011), and ‘The Adventures of Huckleberry Finn’, CCA Wattis Institute for Contemporary Arts, San Francisco (2010). Farmer is participating in this year’s Istanbul Biennial (2011) and will have a major solo exhibition at the Vancouver Art Gallery, Canada in 2013.

Jeremy Millar is an artist living in Whitstable, UK. His recent solo exhibitions include 'Resemblances, Sympathies, and Other Acts', CCA, Glasgow (2011); 'As Witkiewicz', Ethnographic Museum, Krakow; 'Amongst Others', Plymouth Arts Centre (both 2010); and 'Given', National Maritime Museum, London (2009). Recent group exhibitions include 'Incidents of Mirror Travels in Yucatan and Other Places', Museo Tamayo Arte Contemporaneo, Bosque de Chapultepec (2011); 'Never the Same River (Possible Futures, Probably Pasts)', Camden Arts Centre, London (2010); and 'The Dark Monarch: Magic and Modernity in British Art', Tate St. Ives (2009). He is currently a tutor in art criticism at the RCA, London.

Project Arts Centre is a multidisciplinary arts centre in the heart of Dublin, Ireland. The visual arts program commissions new exhibitions with leading artists from around the world. Forthcoming exhibitions include solo projects by Adrià Julià (Spain/USA) and Mikala Dwyer (Australia) and a group exhibition in collaboration with writer and curator, Sally O’Reilly (UK).

Geoffrey Farmer and Jeremy Millar’s new work has been commissioned and produced by Project Arts Centre, and curated by Tessa Giblin.

Project Arts Centre is supported by the Arts Council and Dublin City Council.