International Photography Festival: Non conforme - Uncertified. On view 47 exhibitions. The Manifesto with 36-artist who illustrates the new creative reaches of photography, vintage photographs from the Mexican Revolution in Republic, Documents from Spanish Civil War, The Discovery Award... The Rencontres programme is studded with many other show, projections, seminars, discussions and courses and, as always at Arles, it is enriched by all the parallel initiatives that crop up. 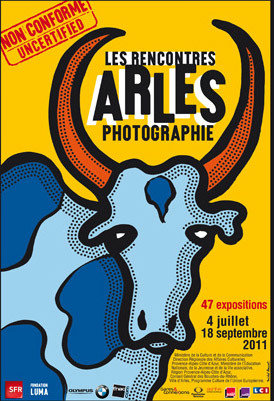 In 2002, in the first edition of the new-style Rencontres d’Arles, we recognised that digital photography has widened the photographer’s palette. Our exhibition Here is New York after the September 11 attacks concerned the first phenomenon of the digital era in which professionals and amateurs all took part and in so doing recognised the genre of ‘vernacular’ photography. Ten years on, the world has changed, so has photography—and its public.

In 2011, five artists and artistic directors, all with long-standing attachments to Arles, signed a manifesto entitled From Here On, declaring a profound change in the ways of photography, brought about by the dominance of the Internet and digital creative methods in accessing and distributing images. This manifesto introduces the 36-artist exhibition which illustrates the new creative reaches of photography.

Chris Marker—who is a precursor if ever there was one—was quick to seek new ways of using photography: from La Jetée to Second Life, from the legendary ‘banc titre’ to his latest passion, the virtual gallery. This committed, amused and astonishing traveller is represented in the exhibition by a series of black and white photographs, made during his journeys around the world, and by his most recent colour series, taken in the Paris Metro, premiering here in Arles.

JR, whom we first exhibited in Arles in 2007, is from a different generation than Chris Marker but, like him, is motivated by political awareness on an international scale. He has always rejected the idea of fatalism—his concerns are for the lot of his fellow humans. JR was recently awarded the prestigious TED award in the United States. He will be presenting the meteoric development of his citizen poster projects at the Théâtre Antique on the closing evening of the opening week. The connection with Mexican artists and exhibition curators is something we have been keen to foster and, in spite of the political upheavals, we are maintaining several exhibitions from this country whose photography, both contemporary and historical, we find so remarkable.

With the support of the Televisa Foundation of Mexico an exhibition brings together vintage photographs from the Mexican Revolution (1910), the defining moment in modern documentary photography. A very fine retrospective of work by Graciela Iturbide has been set up with the help of the Fundación MAPFRE in Madrid and the curator Marta Dahó. Arles and Mexico are linked by long-standing friendship. After a visit to Arles, Pedro Meyer returned to Mexico City where he founded the Centro de la Imagen, which has become the place of reference for Latin-American photographers. When Manuel Alvarez Bravo was asked to create a photograph collection for the Televisa Foundation, he approached many photographers at the first Rencontres, then directed by Lucien Clergue. The Televisa Foundation also presents the work of the late Mexican cinematographer Gabriel Figueroa, initially planned for the Conciergerie in Paris.

At the end of the Spanish Civil War in 1939, when France was on the point of caving in to demands from the new Spanish regime, Mexican President Lazaro Cardenas saved Spanish Republicans imprisoned by the French police in the camp at Argelès by evacuating them to Mexico. The suitcase full of Spanish Civil War negatives by Robert Capa, Gerda Taro and David (Chim) Seymour found its way to that same Mexican democracy. It is being exhibited here for the first time in Europe after a first exhibition at the International Center of Photography, New York, this winter. Trisha Ziff, the person responsible for the retrieval of the treasure, is showing her moving film about the adventures of that suitcase at the opening of the Rencontres at the Théâtre Antique. The section of the programme about press photography celebrates thirty years of the New York Times Magazine with an exhibition co-curated by Aperture Foundation, displaying the excellence of the magazine’s documentary and portrait photography. While photo-journalism is undergoing a violent bout of off-shoring and dumping which refuses to speak its name, a projection evening entitled ‘mano a mano’ brings together the VII Photo Agency and the Tendance Floue Collective, both very different from each other but each one a major influence over the last ten years. And also, the friends of Roger Thérond pay homage to this legendary director of Paris Match, who was a great collector of photographs and one of the first members of the Rencontres d’Arles Board of Directors. Roger Thérond died in June 2001.

The five nominators of the 2011 Discovery Award have all recently been appointed to crucial positions of importance at leading international institut. They represent the new generation of curators, publishers and collectors. They are Simon Baker, Chris Boot, Le Point du Jour (David Barriet, David Benassayag, Béatrice Didier), Sam Stourdzé and Artur Walther, and the selection of fifteen exhibitions they have suggested for this tenth edition is of the highest quality. The Discovery Award was the idea of the Rencontres in 2002 and was immediately supported by the LUMA Foundation. It has been the occasion of invitations to Arles for more than fifty nominators over the years and their extremely varied selections demonstrate just how wide the field of photography has become. It is very clear, looking at the exhibition of prize-winning artists, that, though they were often encountered at Arles when they were on their way up, they have all achieved considerable fame. One of them, Wang Qingsong, prizewinner in 2006, is representative of the great movement in Chinese photography that has been very present at Arles in recent years. The performance-fresco he is exhibiting is 42 metres (138 ft) long.

The Rencontres programme is studded with many other exhibitions, projections, seminars, discussions and courses and, as always at Arles, it is enriched by all the parallel initiatives that crop up. The very beautiful Foam Museum in Amsterdam celebrates its tenth anniversary with the question: What’s next?

The LUMA Foundation programmes involve a seminar, a Trisha Donnelly exhibition, and a revamped version of the LUMA Award that they inaugurated in 2010. The Méjan is keeping up its usual intense photographic activity with Actes Sud and, this year, with the Lambert Collection, too. And, doubtless, Arles will be the scene of all the usual unexpected events and happenings that delight us with their spontaneity and their militancy.

For ten years, confronted by what may sometimes have seemed delicate, not to say esoteric, selections and non-academic displays, some people have regularly questioned whether photography has had its day. To which we answer with a resounding no. It has never been more dynamic, diverse or significant. Its territory shifts, it acquires ever more tools, and the number of people interested in it or who practise it is increasing exponentially. According to a French Ministry of Culture survey, photography has become the first cultural activity for French people. Along with our partners from the public and the private sectors, we cordially thank all those visitors, whether professionals, hobbyists, or students, that we meet in ever-increasing numbers each year. They are the reward for all the work—sometimes harder than it might seem—that the teams involved in the Rencontres d’Arles have been putting in for ten years.

Such large numbers are proof of the respect we owe those who have made the difficult choice of being artists. This statute, far from putting them on the margins, puts them at the very centre of society. They are the independent observers of it—its first critics. Our perception of the world is nourished by their gaze and their open agenda. Long may they continue to broaden our outlook and lead us to behave with more empathy in a society where we should think it a duty to stick together. For all these reasons, I am convinced that a festival is a medium, a time of pause for aesthetic, hence political, reflection about the world. I hope that these last ten years have distilled this message so that in the future it will continue to escape not just the laws of the market but also those of rigid academicism. I am convinced that photography and photographers along with the curators and the artistic directors, will continue to surprise us with new grammars of the discipline, with ‘non-standard’ thinking—thinking that goes beyond preconceived ideas about photography.

LUMA ARLES 2011
An exhibition is not an objects container but a form. It is not the final space of a presentation but a format of appearing. The LUMA Foundation functions as an exhibitions production company. During the summer 2011, LUMA will present 6 forms.
DOUG AITKEN, ARLES: A CITY OF MOVING IMAGES
and
TRISHA DONNELLY Hans Ulrich Obrist and Beatrix Ruf, curators of the exhibition.

FOAM, WHAT’S NEXT?
In 2011, Foam—the Amsterdam photography museum—celebrates its tenth anniversary. For this reason Foam has initiated a project titled What’s Next? about the future of a medium and of a society in transition.

NICOLAS GUILBERT FOR THE CENTRE DES MONUMENTS NATIONAUX
An illustrator from his teenage years through the mid-90s, Nicolas Guilbert had his first show in Paris in 1984

LE MÉJAN
Christophe Agou is self-taught. He discovered photography while travelling in Europe and the United States then settled in New York in 1992.