Premi Internacional d'Art Contemporani Diputacio' de Castello'. An exhibition project with the goal of forging bonds and dialogue between different generations of artists. EACC is the ideal choice of site as the mandate of this prize fits with the rest of the challenging risk-taking projects held at the art centre throughout the year. 25 internation artists will participate in this edition, they develop an artistic work with more than enough creative risk. 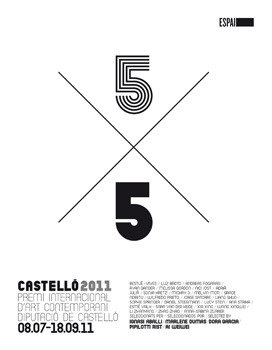 5x5Castelló2011. Premi Internacional d'Art Contemporani Diputació de Castelló is back again at Espai d'art contemporani de Castelló. This edition will be a further step in consolidating the reputation of this international contemporary art prize in the wider art world.

5x5Castelló2011 is an exhibition project created by EACC with the goal of forging bonds and dialogue between different generations of artists. EACC is the ideal choice of site as the mandate of this prize fits in to perfection with the rest of the challenging risk-taking projects held at the art centre throughout the year.

The selection process is divided into three consecutive yet interconnected phases conceived to ensure the prize's demanding standards of quality.

The first stage consisted of establishing contact with five artists, plenty worldwide renown, to whom it was entrusted, in a disinterested and free way, the task of proposing a list of other five contemporary artists which, according their criteria, were developing an artistic work of obvious creativity and more than enough creative risk. For the current edition this first group was formed by the following names: Ignasi Aballí, Marlene Dumas, Dora García, Pipilotti Rist and Ai Weiwei.

Once the proposal was accepted by the latter and the different lists were obtained, the second stage of the project started. In this stage, it was established contact with each one of the artists registered in the different lists.

It was explained to all of them both the criteria and intentions of the competition and the name of the artist that considered the merits of their work as essential to take part in the announcement.

The third stage results in the carrying out of an exhibition that entitled: 5x5Castelló2011. Premi Internacional d´art contemporani Diputació de Castelló that will take place in the current edition from 8th July to 18th September and which central venue will be the EACC.

In a parallel way, the EACC direction will announce the setting-up of a jury mainly represented by art critics or museum directors that will be in charge of awarding the prize.

It has to be emphasized the intention of the participants institutions of generating through the award winners works along the consecutive editions, a collection of contemporary art that will be established with the time as a patrimony of unquestionable interest.

Espai d'art contemporani de Castelló
C/ Prim, s/n 12003 Castelló. Spain
open to the public from Tuesday to Sunday from 10 am to 8 pm.
Closed on Mondays.