It is the series Induction and Tribune that the artist is referring to. Every observer is free to come to his own conclusions, as Elena Nemkova does not care about a 'correct' or 'only' way to interpret her works. 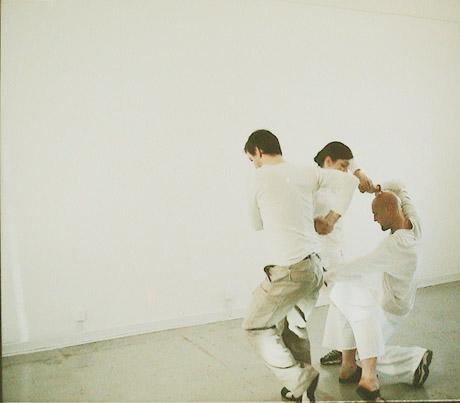 The Galleri Konstepidemin open the exhibition of the artist in residence Elena Nemkova.

It is the series INDUCTION and TRIBUNE that the artist is referring to.
Every observer is free to come to his own conclusions, as Elena Nemkova does not care about a 'correct' or 'only' way to interpret her works.

The objects, represented in small scale, may be differently identified with tribunes or, on the other hand, with spring boards-or-something-else. Unreal in their proportions, they lead us to doubt of the real 'size' of the meaning of tribune, these certainly not being appropriate for holding a revolutionary speech or leading a crowd. Despite that fact that they are undoubtedly majestic in the shape, they lead us through a rethinking of the concept of 'superior', almost to a mockery of it. It is about another world that we think, a world with different criteria and proportions, where it is easy for mankind to dominate through 'reasoning', rather than being dominated by governors standing on their political tribunes. It is about a fair and just world that we are thinking, an ideal world. An element of the artificial world creation is always present in the works of the artist.

Coming to the photos 'Induction', we feel liberated by seeing that they represent very close teamwork. But, just for a moment. It is weird work, perpetual, and meaningless. To a different eye, it could also reveal itself as a 'hanging around' moment of the three guys, as if they were playing a game, close to break the limit of pleasure and cruelty. Or, perhaps one might recognise in them the tiny human figures of the videogame, with their predictable moves; just as predictable as the next key that will be pushed. Whatever we see in them, we have plenty of elements to make up in our minds a story that will belong to us, and only us. The pictures do not aim to tell a story with a certain well-defined beginning and an even more defined end. Rather, they are fragments of something that is other than the world of our everyday life. Their nature is of something that has been 'captured' or spied, it introduces us to the intimacy and secrecy of the action. Could it be a training or a game' With what purpose' Who is leading them' We do not know either happy ending, nor how the story continues. Everything is possible, just like our reality, that is turning closer and closer to the videogame, programmed and led by third parties. The purpose, the ultimate goal for us, the players, being to survive by using our skills, brightness, and fulminous reaction.

As by its literal meaning 'induction' is needed in research to fulfil the need of keeping an eye on similar apparently small individual facts, in order to allow predicting and exploring the bigger events of nature and social life. In 'Induction'-series this overall view comes together thanks to new themes that help to decode the hidden meaning of observations, and to formulate it into general rules. In the same way as artistic work contributes to decoding the hidden meaning of our world.