The Colour of My Dreams

The Surrealist Revolution in Art. Featuring 350 works by Surrealist masters, this historic exhibition brings together loans from more than 60 of the world's foremost private collections, museums and galleries. It highlights the many techniques developed by the artists including automatism, frottage, fumage, Rayographs and 'the surrealist object,' an approach to sculpture in which several unrelated components -most often found objects- were joined together. 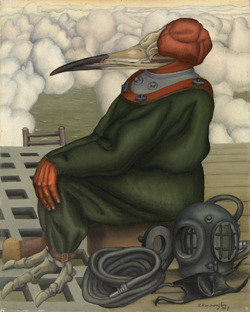 The most comprehensive exhibition of Surrealist art ever to be shown in this country will open at the Vancouver Art Gallery on May 28, 2011. The Colour of My Dreams: The Surrealist Revolution in Art features 350 works by leading Surrealist artists, including André Breton, Salvador Dalí, Max Ernst, René Magritte, Joan Miró, Alberto Giacometti, Leonora Carrington, Brassaï, André Masson, Man Ray, Edith Rimmington, Wifredo Lam and many others.

Guest curated by Dawn Ades, internationally renowned expert on Surrealist art, The Colour of My Dreams will be shown exclusively at the Vancouver Art Gallery. Ades has selected works of art that underscore the Surrealists’ radical sense of experimentation and the expansive range of mediums in which they worked, including painting, sculpture, collage, photography and film. The exhibition provides a stunning overview of one of most important movements of the 20th century and features a number of signature works by more than 80 artists including Dali’s Lobster Telephone, Ernst’s The Forest, Miró’s Photo: This is the Colour of My Dreams, Giacometti’s Spoon Woman, Carrington’s The House Opposite and Man Ray’s Emak-Bakia, among many others. It will also reveal, for the first time, the Surrealists’ passionate interest in indigenous art of the Pacific Northwest and the little-known influence of early Hollywood cinema on the development of Surrealist film.

This historic exhibition brings together loans from more than sixty of the world’s foremost private collections, museums and galleries, including the Guggenheim, The Metropolitan Museum of Art, The Museum of Modern Art, Museo Nacional Centro de Arte Reina Sofia, the Israel Museum, the Musée du quai Branly, the Centre Georges Pompidou, and Tate.

André Breton wrote the first Manifesto of Surrealism in 1924, launching a movement which continues to exert a powerful influence. Inspired by Sigmund Freud’s own investigations, Breton was fascinated by dreams and set out to create an artistic process which would tap directly into the unconscious mind and dreams freeing artists from what he saw as “false rationality.”

The installation of the exhibition is designed to create a variety of environments and moods in which to contemplate the themes that the Surrealists explored over a period of three decades such as desire, androgyny, violence and transmutation. The exhibition also highlights the many techniques developed by Surrealist artists including automatism, frottage, fumage, Rayographs and ‘the surrealist object,’ an approach to sculpture in which several unrelated components—most often found objects—were joined together.

The Colour of My Dreams brings to light for the first time in an exhibition the Surrealists' fascination with First Nations art. Breton and some of his colleagues felt European culture was in decay in the decade preceding World War II, leading many of the Surrealist artists to develop a passionate, if complex, interest in indigenous ceremonial art, including that of the Pacific Northwest. The Surrealists were drawn to the "authentic" quality, inventiveness of form and visual brilliance of First Nations art. This important component of the exhibition also highlights, through a selection of period publications and never-before-exhibited documentary photographs, the seminal trips made to British Columbia and Alaska in the late 1930s by artists Wolfgang Paalen and Kurt Seligmann. Some of the movement's members collected, wrote about and even exhibited their own work alongside First Nations art from British Columbia and Alaska. Included in the exhibition are a number of spectacular masks and other First Nations pieces such a Kwakwaka'wakw headdress from Alert Bay, British Columbia, which once belonged to Breton; two Yup'ik masks from Alaska and a Haida feast bowl acquired by artist Enrico Donati; three Yup'ik masks formerly in the collection of artist and poet Robert Lebel and an important sketchbook by Lebel that depicts the Yup'ik masks displayed here.

Another ground-breaking aspect of The Colour of My Dreams is an examination of the little-known influence of early cinema on the development and evolution of Surrealist film -- perhaps one of the most influential legacies of the movement. The exhibition reveals the formative early films that captured the Surrealists’ imagination -- ranging from F.W. Murnau’s Nosferatu to Betty Boop cartoons to Hollywood movies featuring Charlie Chaplin and Buster Keaton. Displayed throughout the various galleries of the exhibition, nearly 30 films reveal the provocative nature of Surrealist filmmaking and its antecedents.

On the occasion of the exhibition, a 336-page hardcover book edited by Dawn Ades will be published by the Vancouver Art Gallery. One of the largest books produced by the Gallery, it features essays by Ades and thirteen other internationally acclaimed scholars.

This exhibition is organized by the Vancouver Art Gallery.

For the fourth installation at Vancouver Art Gallery Offsite, renowned sculptor Elspeth Pratt draws on architectural forms as inspiration to investigate how built environments define public space. While her artworks negotiate a line between abstraction and representation, her ideas are manifest through the use of ready-made industrial materials that negate notions of permanence and value associated with traditional sculpture

Image: Edith Rimmington, The Oneiroscopist, 1947 oil on canvas. The Vera and Arturo Schwarz Collection of Dada and Surrealist Art in the Israel Museum Photo: © The Israel Museum, Jerusalem