With Petrit Halilaj, Judith Hopf and Bedwyr Williams, this exhibition unites three artists whose practice is built around their own biography and life situation. Though their respective productions appear to be peculiar and rather different from each other, all three artists address social issues: they raise questions as to everyday codes and conventions, to identity and integration or to unwritten boundary lines between cultures and social groups. 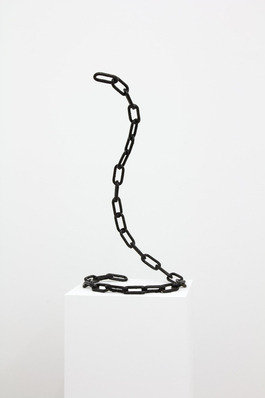 With PETRIT HALILAJ, JUDITH HOPF and BEDWYR WILLIAMS, this exhibition unites three artists whose practice is built around their own biography and life situation. Though their respective productions appear to be peculiar and rather different from each other, all three artists address social issues: they raise questions as to everyday codes and conventions, to identity and integration—for instance, in the art world—or to unwritten boundary lines between cultures and social groups.

HALILAJ, HOPF and WILLIAMS, despite all the heterogeneity of their practices, have chosen a common approach in taking up volatile and earnest themes, namely indirect discourse. The indirect approach by means of cabaret, parody and comedy—above all the genre of comedy as a mixture of comic and gravity—is often the most effective way of addressing controversial themes in society. While the three artists observe their own situation, they develop in their work a certain distance and irony to their own experience and cue their idiosyncratic narrative structures to end seemingly pointlessly. The reflexion upon their respective life experiences goes hand in hand with a strong relation to nature: as a place of retreat on the one hand but, on the other, also as a place that, having lost its innocence, today alludes to existential experience.

The connection of nature, identity and existence is especially manifest in the project Kostërrc by PETRIT HALILAJ (*1986 in Runik, Kosovo, lives in Berlin, Mantova and Runik) that relates to his homeland. HALILAJ dug a huge piece of earth out of his family’s garden, without value since the war, and put it on display at the exclusive Art Basel fair. Its presentation in Kunstverein Bonn offers a different perspective on the work, focusing on the effort and outputs of the artist to bring this piece of earth to migrate from one country to another.

Like HALILAJ, JUDITH HOPF (*1969 in Karlsruhe, lives in Berlin) utilizes objects of everyday culture, which she refashions into sculptural pieces, installations, performances and video works. A peculiar theatricality pervades her work. She calls social conventions into question, as well as social power structures. In her pieces for the Kunstevrein, the figures and narrations are attuned to the fantastic—like her video about a horse that can count—which, blown up to absurdity, bring fundamental theses into play.

To BEDWYR WILLIAMS (*1974 in St. Asaph, Wales) the starting point for his artistic observations is his self-chosen place of residence in rural Wales. Along with sculpture and installation, performance is an important component of WILLIAMS’ praxis. Here personal or familiar stories form the starting point for singularly woven narrative strands that, in the end, playfully bring moral or ethical principles to light. His recourse to traditional materials that he reinterpretates points to universally connoted boundaries—such as between town and country, tradition and modernism, art and the everyday—and dismantle their classical position.

The three artists incorporate elements of the everyday into their work, which either come across as signs of identification—for instance the soil or the landscape of one’s homeland—or are understood as signs of belonging to a professional status or to a social group. In the exhibition, one can find materials that, on the one hand, have been removed from their original context and, on the other, materials that are usually in force as links and have been formally stiffened, for example metallic chains. Through a process of estrangement, the artists underline the uncertainty that meanwhile emerged within traditional reference points, whereby the multilayered content of their works draws our attention to the contradiction in these references: they are concurrently lapsed and relevant. Their attempt to approach social constructs along lines of pretended naivety reflects upon the complex relation between traditional orientation points and contemporary identities.

PETRIT HALILAJ came to attention with his strong presentation at the Berlin Biennale 2010 and took part in group and solo shows in Istanbul, Paris, Milan and Münster, among others. His work will be on view this summer in the New Museum, New York, and in the autumn in a solo exhibition at Kunstraum Innsbruck.

JUDITH HOPF’s work has been shown in numerous institutions in Europe: at Kunsthalle Bern, Tate Modern in London, De Appel in Amsterdam, at Generali Foundation in Vienna, etc. Her works are presently on view in group exhibitions at Kunsthalle Basel and Kunsthalle Vienna. She is a professor at the Städelschule in Frankfurt am Main.

BEDWYR WILLIAMS represented Wales at the Venice Biennale 2005 and in 2004 won the renowned Paul Hamlyn Award for Visual Art. He has exhibited and performed at Camden Arts Centre in London, at “1857” in Oslo, at PS1 New York and at the Galerie Store in London. His work could recently be seen in a solo exhibition at Jerwood Foundation, London.