Black Moon. The first installment of a two-part exhibition. In her multipart works for the show, Siegel takes seemingly disparate filmic elements, often derived in part from archives and her own filmed images, and arranges them in an accumulative constellation, a method of associative montage that, in her cinema films, unfolds and recurs subtly over time. 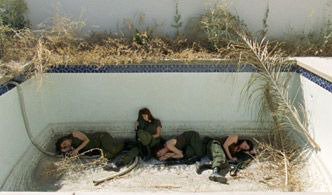 The Kunstmuseum Stuttgart presents Amie Siegel's recent work "Black Moon," the first installment of a two-part exhibition. In spring 2013 Siegel will return to the Kunstmuseum to exhibit a new work on film.

Ranging from photographs, video, film installations, and feature films for the cinema, Siegel’s artwork re-orientates the fictions within documentary practices, often doubling back on history through the specific patterns of cinematic choreography and architecture. In her multipart works for exhibition, Siegel takes seemingly disparate filmic elements, often derived in part from archives and her own filmed images, and arranges them in an accumulative constellation, a method of associative montage that, in her cinema films, unfolds and recurs subtly over time. These gradual gatherings within and between works suggest montage is a third thing that, as the artist has written, "unfolds in us."

The heart of the first part of this double exhibition is the film Black Moon (2010), shot on super-16mm film and transferred to HD. An enigmatic story evolves without dialogue, a group of armed women comb through deserted, unfinished developments of luxury homes—evidence of the US mortgage crisis—the landscape alternating as setting and subject of a mysterious and inexplicable future war. The women, at times highly styled, go through various psychological as well as physical stages of an apocalyptic civil war whose background remains unclear. Siegel draws on stylistic devices traced from different film genres: science fiction, action, the western. Her original point of reference is Louis Malle's 1975 film of the same name. Siegel translates key motifs from Malle’s surrealist gendered war into a contemporary iconography both allusive and uncanny.

These methods of transposition, remake, reenactment and doubling play an important role in Siegel's body of work, and reverberate in the second element of the artwork, Black Moon/Mirrored Malle (2010), a two-channel video installation. Here a 1975 film interview with Louis Malle concerning his Black Moon is confronted with a reconstructed version of the interview. In this contemporary "documentation" the artist plays the part of the auteur, discussing "the making of." The fractures produced by the exchange of gender, language (English/French) and inverted setting generate the effect of a mirror in which the cultural codes of the time become visible.

Siegel links the events of her film with a reflection on the formal aspects of the medium, the overlay of fiction and documentation, in the third part of the project: Black Moon/Hole Punches (2010). A series of photographs derived from the moment when film is transferred to video and the laboratory punches a hole into the film negative as a synchronization point, the image later discarded. Siegel printed the hole-punched frames from the digital transfer of her Black Moon dailies. The dark irregular voids shot through her landscape photographs appear as gunshot remnant or threat-ening black moon. They are allegories of the film's narrative as well as relics of the material basis of the film.

Black Moon screened in the Cannes Film Festival’s 2011 Semaine de la Critique. The Kunstmuseum Stuttgart show is the first museum presentation of the entire ensemble of Black Moon works. The double exhibition extends Siegel’s concerns with mirroring and reprise, suggesting a rebounding line of thought between the two installments of the exhibition over time.