The show will feature the most recent paintings by the artist which have been completed in the last three years, reflecting spiritual light fighting against desperation and the darkness of the reality. 'Unconsciousness', the title of the exhibition, wants to warn of the unawareness that keep people blind and controlled. 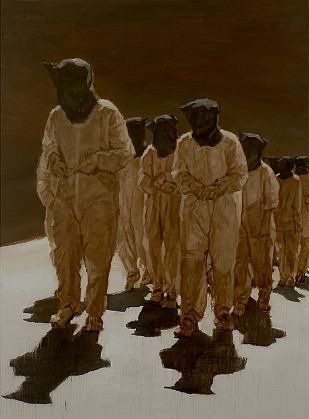 The idiosyncrasy of Luo Qing's works may be exemplified by the concept of unconsciousness. Luo Qing's works reflect spiritual light fighting against desperation and the darkness of the reality.

Although Luo Qing's works represent scenes of real places, they are not aimed to be political but instead concern the individual and the embodiment of one's isolation and desperation engendered by the surrounding hostile society. Luo Qing comments that, "What I paint is the status and the situation of human beings, or my own problems. Painting for me is a process of psychological therapy." By choosing to remain silent or hypnotized instead of fighting against the tangible world, the characters in Luo Qing's paintings represent the situation of their generation in the spiritual world. Beneath the characters' superficial silence, there is a complex mental struggle occurring within each person.

Luo Qing's Walking Forward No.4 shows a group of people wearing the same uniform and hood, thereby making them indistinguishable as individuals. The viewer questions who each person might be and what fate awaits them. Luo Qing says, "Desperation comes from reality; but on a spiritual level, we need to have a ray of light to fight against the darkness." For Luo Qing, meditation is that light, and his works warn of the unconsciousness and unawareness that keep people blind and controlled.

The artist will be present for the opening reception on Friday, July 22 from 3 - 6 PM.