The Life and Death of Buildings

The show examines the life-cycle of buildings through photographs which capture a moment in time to tell the story of a building. On display, alongside images from William Henry Fox Talbot and Alfred Stieglitz is Danny Lion's 1967 series, The destruction of lower Manhattan, 72 photographs which document the demolition of a 60 acre site to make way for the World Trade Centre. Highlights from the series find their place amid works by an international roster that includes, Eduard Baldus, Alexander Rodchenko, Laura Gilpin, Bernd and Hilla Becher, Zhang Dali... 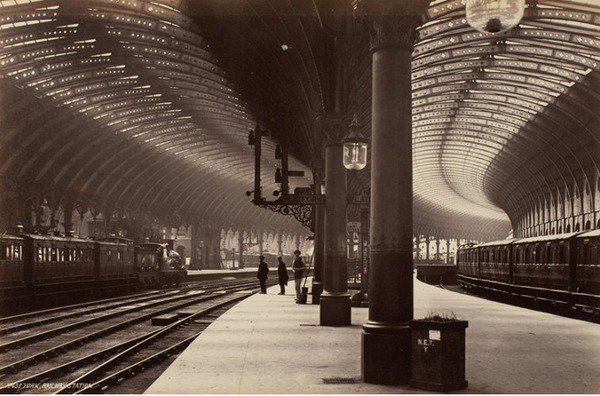 Architecture inhabits and embodies time; whether months or centuries in duration, a building’s life cycle of construction, transformation and afterlife gives tangible form to history and turns public space into an index of the past. A photographic image is literally made of time, showing viewers the projection of an instant in history. When engaging with a photograph of a built environment as it once looked, we find ourselves immersed in an historical experience that was without precedent before the invention of photography in 1839.

“A building concentrates history in one spot; a photograph carries history around the world,” said Joel Smith, curator of photography at the Princeton University Art Museum and curator of the exhibition. “When these two forms of knowledge intersect, our historical imagination is ignited, whether we’re looking at a site in Jerusalem in the nineteenth century or Manhattan’s skyline in August of 2001.”

An indirect meditation on the upcoming 10th anniversary of 9/11, The Life and Death of Buildings doubles as a survey of extraordinary photographs from the 1840s to the present, drawn from Princeton’s collection and a select list of public and private lenders. The exhibition’s central theme—the constancy of architecture’s life and death, as uniquely realized through the camera—is recurringly struck by selections from Danny Lyon’s series The Destruction of Lower Manhattan (1967). A recent gift to the Museum, the 72-image series records the abrupt, unsung demise of the antebellum neighborhoods that were torn down to make way for the World Trade Center. Highlights from the series find their place amid works by an international roster that includes William Henry Fox Talbot, Eduard Baldus, Alexander Rodchenko, Alfred Stieglitz, Laura Gilpin, Bernd and Hilla Becher, and Zhang Dali.

Casting a sidelight on photography’s unique historical voice is a group of major works in other media, each reflecting in its distinct way on time and the lives of buildings. Gordon Matta-Clark’s Splitting: Four Corners consists of the four roof corners of a New Jersey house demolished in 1974; in a gallery context, the empty space in their midst feels both sculptural and historical. A lengthily inscribed Yuan Dynasty painting of a seventh-century royal pavilion exemplifies a Chinese perspective that identifies a monument neither by its form nor by its materials (the pavilion has been rebuilt on its site more than two dozen times) but by the inaugural act of consecration that invests the structure with its meaning. Richard McGuire’s six-page comic Here (1989), a widely influential work in contemporary graphic narrative, keeps the eye fixed on one corner of a domestic interior but leapfrogs through time, pointedly juxtaposing future and past events to suggest the central yet ephemeral role of shelter in human fortunes.

The Life and Death of Buildings will be on view only in Princeton, and is accompanied by an illustrated catalogue by Joel Smith, Princeton curator of photography, distributed by Yale University Press and available in the Museum Store.