The exhibitions juxtapose three approaches to art making that are each steeped in a distinct dialogue with art from the west coast. New paintings by Kristin Calabrese; an installation, paintings on ceramic and canvas by Monique van Genderen; a group of two-dimensional works and a largest sculptures by Mindy Shapero. 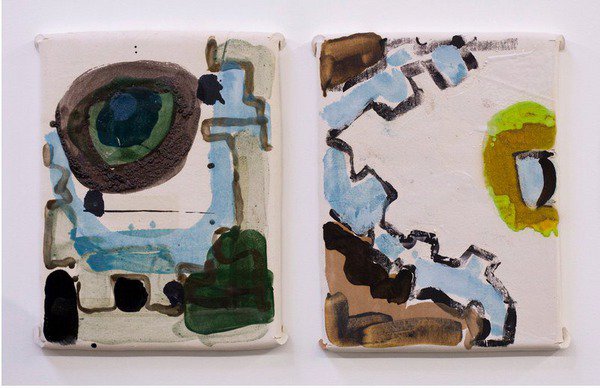 Susanne Vielmetter Los Angeles Projects is pleased to show solo presentations of new work by Kristin Calabrese, Monique van Genderen and Mindy Shapero. The exhibitions juxtapose three unique and very different approaches to art making that are each steeped in a distinct dialogue with art from the west coast.

The first gallery features new paintings by Kristin Calabrese. Entitled "Back of my Face", the exhibition can be read as an attempt to compress the artist's thoughts and feelings into paintings. "Back of my Face" is a poetic title - descriptive of emotions translated from the body and pushed into a surface. Each painting is a closed system that doesn't change with interaction. The works are physical manifestations of areas of conflict, intended as stand-ins for the presence of the artist. Included in the exhibition will be a painting of a broom leaning against the wall like a broom would, a painting of plywood, a painting of 3000 band-aids, as well as several self-portraits showing the artist balancing a potted plant or a pile of spaghettis on her head. The paintings, though the mode of choice is a highly detailed form of realism, are less ruminations on the nature of objects but more an investigation of the relationship between feelings on the inside versus the visible world on the outside.
Kristin Calabrese received her MFA from UCLA in Los Angeles, California. She has previously had solo exhibitions at Gagosian Gallery, Beverly Hills; Brennan & Griffin, New York; Leo Koenig Gallery, New York; and at CI-ARC, Southern California Institute of Architecture, Los Angeles, CA.

In the second gallery, Monique van Genderen presents an ambitiously scaled installation that simultaneously straddles the interior and exterior of the space. In the adjacent gallery van Genderen's explorations continue her vocabulary with new paintings, some in ceramic, others on canvas. Van Genderen's work references abstraction through the use of hard-edged cutouts, sign making, and industrial materials, creating a painterly language that is concerned with surface, finish, and continued interventions within the subject of painting. Her recent ceramic paintings add a new layer of texture to this exploration - alluding to the canvas as the clay displays woven textures. Shifting between abstraction and the acknowledgement of recognizable shapes, Van Genderen's works are decidedly flat, reveling in their two-dimensionality and delightful reliance on their materials to narrate the subject of painting.
Monique van Genderen received her MFA from the California Institute of the Arts, Valencia. Solo exhibitions of her work have been organized at Hammer Projects, UCLA Hammer Museum, Los Angeles, CA; Kunstverein Heilbronn, Heilbronn, Germany, Wexner Center for the Arts, Columbus, Ohio; the Pennsylvania Academy of the Fine Arts, Philadelphia; Michael Janssen Gallery, Berlin; Happy Lion, Los Angeles, and the Chinati Foundation, Marfa, TX. Her work has also been included in group exhibitions at the Kunstmuseum St. Gallen, Switzerland; the Japanese American National Museum, Los Angeles; New Museum, New York; Art Unlimited at Art Basel 37; and in the 48th Corcoran Biennial in Washington, D.C.

In the fourth gallery, Mindy Shapero presents a group of objects and two-dimensional works, including one of her largest sculptures to date. Covered in a mosaic of glass tiles, this monumental mask-like form is the result of a labor-intensive studio practice that generates visual mythologies specific to each artwork. In Shapero's practice, formal decisions are described in the studio according to often elaborate and sometimes fantastical narratives; these narratives, in turn, influence further formal decisions. This allows her to incorporate not only a wide range of historical influences, but also to construct physical representations of the way those influences weather the passage of time. In the works on view in this exhibition, forms reminiscent of African, Oceanic, and Greek antiquity speak to a supernatural imaginary landscape of visual culture. They include a tall, leaning wooden sculpture covered in totem-like paintings of masks and two-dimensional works that depict heads using a variety of media, including spray paint and found objects. Each work reveals its strata of narrative and labor over time, allowing viewers to experience a kind of mystical cross-pollination of language and tangible material.
Mindy Shapero received her MFA from the University of Southern California. Her work has been featured in exhibitions at the Wexner Center for the Arts, Columbus; the Orange County Museum of Art, Newport Beach; the Hirshhorn Museum and Sculpture Garden, Washington; the UCLA Hammer Museum, Los Angeles; the Aspen Art Museum, Colorado; The Breeder, Athens; Marianne Boesky Gallery, New York; and Anna Helwing Gallery, Los Angeles.