Retrospective 1964-1977. Dia Art Foundation and CCS Bard organized the first North American retrospective of the work of Blinky Palermo (1943-1977). The exhibition is curated by Lynne Cooke and culminates its national tour in the Hudson Valley. CCS Bard will present Palermo's Works on Paper and early works, 1964-1973; the exhibition at Dia:Beacon will comprise the artist's Metal Pictures and late works, 1973-1977. 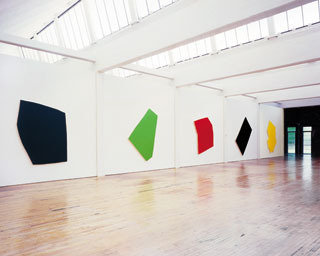 The acclaimed exhibition Blinky Palermo: Retrospective 1964–1977 concludes its year-long tour at Dia:Beacon and the Center for Curatorial Studies at Bard College (CCS Bard), from June 25 through October 31, 2011. This first comprehensive North American retrospective of the work of the influential German artist (1943–1977) introduces American audiences to all phases of Palermo’s career. Including over sixty works, many of which have never before been shown in the United States, the retrospective provides a fresh and in-depth examination of the evolution of the artist’s aesthetic and illustrates the significance of his contributions to the field of postwar painting. The majority of the works in the exhibition are on loan from private and public lenders in Germany.

Organized by Dia Art Foundation and CCS Bard, the exhibition represents the first collaboration between the two largest museums in the Hudson Valley dedicated to art from the 1960s to the present. It has been curated by Lynne Cooke, Dia’s curator from 1991 to 2009, a former faculty member at CCS Bard, and currently chief curator and deputy director at the Museo Nacional Centro de Arte Reina Sofía, Madrid. The retrospective culminates over nine years of research and planning, and has previously been seen at the Los Angeles County Museum of Art (LACMA) and the Hirshhorn Museum and Sculpture Garden, Washington, DC.

While Palermo’s reputation as one of the foremost postwar artists in the West is well-established in Europe, his work has been infrequently exhibited in the United States prior to this retrospective. Blinky Palermo: Retrospective 1964–1977 encompasses the four principal categories of the artist’s oeuvre, with works divided chronologically between CCS Bard and Dia. On view in the CCS Bard galleries will be the Objects created by the artist shortly after he graduated from Joseph Beuys’s class at the Düsseldorf Art Academy in 1964; Cloth Pictures, dating from 1968; and documentation of his Wall Drawings and Paintings. The installation at Dia:Beacon will be devoted to Palermo’s Metal Pictures, which were made between 1973 and 1977 when they were interrupted, in media res, by the artist’s untimely death. These works were primarily executed while the artist was living in New York City and, with a few exceptions, after he had stopped making artworks in other mediums. Both installations will feature new loans to the retrospective: four significant works from the Pinakothek der Moderne, Munich, will be on view at CCS Bard, and the Dia:Beacon presentation will include Times of the Day versions III, IV, V, and VI (all works 1975), which have been borrowed from a private collection.

Blinky Palermo: Retrospective 1964–1977 continues Dia’s longstanding commitment to Palermo. Palermo’s first solo show was held in 1968 at the Munich Gallery of Heiner Friedrich, one of Dia’s founders. In 1987, Dia inaugurated its exhibition space in Chelsea with major shows of works by Palermo, alongside those of Beuys and Imi Knoebel. Since its opening in 2003, Dia:Beacon has housed the only significant Palermo installation in the United States, featuring To the People of New York City (1976), an exceptional work in fifteen parts, which is a centerpiece of the retrospective. (This key work in Dia’s collection was the subject of a major scholarly monograph, Palermo: To the People of New York City, copublished by Dia and Richter Verlag, Düsseldorf, in 2009.) Marieluise Hessel, cofounder of CCS Bard, with encouragement by Friedrich, collected works by Palermo, several of which are included in this retrospective.

The retrospective is accompanied by a full-color, hardcover book, copublished by Dia and Yale University Press. Continuing Dia’s tradition of original scholarship, it contains essays by Ms. Cooke, Benjamin H.D. Buchloh, Suzanne Hudson, Susanne Küper, and James Lawrence that position the artist’s work in relation to postwar American art and culture, examine issues of space and time in the Wall Drawings and Paintings, and provide insights into Palermo’s works on paper. The book includes a preface by Dia Director Philippe Vergne and CCS Bard Director Tom Eccles, a biography, and an extensive bibliography. It is available for $50 online at www.diabooks.org, and at the bookshops at Dia:Beacon and CCS Bard.

On Saturday, June 25, Dia and CCS Bard will be open from 11–6 pm and will host events at both locations. These events are open to the public, and food will be available for purchase at each venue. A free round-trip charter bus to both locations will depart from New York City at 10 am and return by approximately 7:30 pm.

Driving directions to and between venues are available at www.diaart.org/palermo and www.bard.edu/ccs.

Lynne Cooke and Dia have invited four artists who have been inspired by Palermo’s work to give walkthroughs of the Dia:Beacon installation of the exhibition, exploring Palermo’s Metal Pictures and late works within the context of his artistic development. The schedule of talks at Dia:Beacon is as follows. They begin at 2 pm and are free with museum admission.

Additional public programs will be organized at CCS Bard. Visit www.bard.edu/ccs for details.

The national tour of Blinky Palermo Retrospective 1965–1977 is made possible by GUCCI. Additional tour support is provided by The Andy Warhol Foundation for the Visual Arts, the Brown Foundation, the National Endowment for the Arts, and Glenstone. Funding for the publication is provided by Sotheby’s, the Marx Family Advised Fund at Aspen Community Foundation, and the Andrew J. and Christine C. Hall Foundation.

Blinky Palermo was born Peter Schwarze in 1943 in Leipzig, where later that year he and his twin brother were adopted by Erika and Wilhelm Heisterkamp. In 1962 he entered the Kunstakademie Düsseldorf, where he studied with Joseph Beuys and became known as Blinky Palermo, a name he appropriated from an American boxing manager and mafioso. In 1968 Palermo created a wall drawing at the Galerie Heiner Friedrich, Munich. After visiting New York with Gerhard Richter in 1970, he established a studio there in 1973. Palermo died in 1977, while traveling in the Maldives. His last work, To the People of New York City (1976), was shown at the Heiner Friedrich Gallery, New York, in 1977, and at Dia in Chelsea, in 1987. During his lifetime, Palermo participated in more than seventy exhibitions and represented Germany at the 13th São Paulo Biennial (1975). Posthumous retrospectives have been presented at the Kunstmuseum Winterthur (1984); the Kunstmuseum Bonn (1993); Museu d’Art Contemporani de Barcelona, in coproduction with the Serpentine Gallery, London (2002); and the Kunsthalle Düsseldorf and Kunstverein für die Rheinlande und Westfalen, Düsseldorf (2007).

The Center for Curatorial Studies at Bard College

The Center for Curatorial Studies at Bard College is an exhibition, education, and research center dedicated to the study of art and curatorial practices from the 1960s to the present day. In addition to the CCS Bard Galleries and the Hessel Museum of Art, CCS Bard houses the Marieluise Hessel Collection of more than 2,000 contemporary works, as well as an extensive library and curatorial archives that are accessible to the general public. The Center’s two-year graduate program in curatorial studies is specifically designed to deepen students’ understanding of the intellectual and practical tasks of curating contemporary art. Exhibitions are presented year-round in the CCS Bard Galleries and the Hessel Museum of Art, providing students with the opportunity to work with world-renowned artists and curators. The exhibition program and collection also serve as the basis for a wide range of public programs and activities exploring art and its role in contemporary society. For more information, visit www.bard.edu/ccs.