The Landscapes. The comprehensive special exhibition turns the focus on the artist's oeuvre in landscapes, showing 70 paintings, among them masterworks such as The Harbor of Genoa from the St. Louis Art Museum and the Seashore from the Museum Ludwig, Cologne, but also sublime works from numerous private collections that have rarely been on public display. 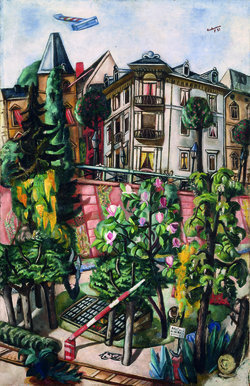 Max Beckmann (Leipzig 1884 – 1950 New York) is one of the titans of modernism, even though he saw himself as the last Old Master. He never joined any of the avant-gardist schools of the twentieth century, but the experiences of Impressionism, Expressionism, New Objectivity, and abstract art left their traces in his oeuvre.

Beckmann was long perceived as a typically German artist, and only in the past few years has his importance been fully appreciated on the international stage, with retrospectives in Paris, London, and New York. Against the modernist tendency to dissolve the traditional genres, Beckmann remained a lifelong defender of classical genres: the depiction of the human figure—in the form of portraits, mythological tableaus, and acts—the still life, and the landscape. Famous as a painter of the human condition, he also renewed the genre of landscape painting with outstanding and haunting works that are virtually without equal in twentieth-century art.

The comprehensive special exhibition at the Kunstmuseum Basel now turns the focus on the artist’s oeuvre in landscapes, showing seventy paintings, among them masterworks such as The Harbor of Genoa from the St. Louis Art Museum and the Seashore from the Museum Ludwig, Cologne, but also sublime works from numerous private collections that have rarely been on public display.

Two other exhibitions form perfect complements to ours, offering visitors an unparalleled opportunity to study Beckmann’s oeuvre: Max Beckmann. Face to Face at the Museum der bildenden Künste, Leipzig (September 17, 2011–January 22, 2012) and Beckmann & America at the Städel Museum, Frankfurt (October 7, 2011–January 8, 2012). Beckmann’s landscapes allow the beholder to trace the development of his art in its purest form. Less shaped by allegorical layers of meaning, they directly reveal his magnificent qualities as a painter.

Beckmann’s reserved view of the landscape remains striking: vistas framed by windows, curtains, parapets, columns, and elevated vantage points often mediate the distance between the inhabited world and the boundless expanses of nature. Private objects from Beckmann’s possessions frequently appear in the foregrounds of these landscapes as vestiges of the still life, giving the beholder a sense of the painter’s presence. The dramaturgy of these vistas is evidence that Beckmann fuses an abstractly conceived image of the landscape with the recollection of the impression he received from a particular scenery that is the foundation of each painting. The gaze he fixes on nature helps clarify his standpoint and places him in a relationship with the world. Landscapes from different phases of his life illustrate how this relationship evolves.