The exhibition presents the work of nine artists each of whom make work that invites the viewer to make the leap between an idea and an object. In every case the resulting artwork is a thing of grace and intrigue in itself, but always the story of why it exists in the world raises it to yet another level. 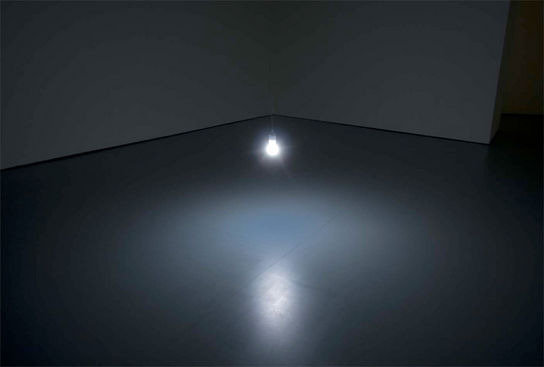 "Conceptual artists are mystics rather than rationalists. They leap to conclusions that logic cannot reach" - Sol LeWitt It is forty years since Sol LeWitt published his famous Sentences: a sequence of 35 statements that defined personal parameters for the making and understanding of conceptual art. Sentence number one provides the title and inspiration for Ingleby Gallery’s exhibition for the 2011 Edinburgh Art Festival and is still a compelling and instructive introduction to the first principles of conceptual art.

The exhibition presents the work of nine artists each of whom make work that invites the viewer to make the leap between an idea and an object. In every case the resulting artwork is a thing of grace and intrigue in itself, but always the story of why it exists in the world raises it to yet another level. “The idea” as LeWitt noted, “is the machine that makes the art”.

Four mirrored cubes by Jeremy Millar will run down the centre of the main gallery, each sitting on a bed of rock salt. Miller’s visual reference to Robert Morris’s famous sculptures from 1965 explores the relationship between minimal and conceptual art, and, with their coating of purifying salt, the world of ritual and magic.

A sense of the magical also marks Susan Hiller and Cornelia Parker’s work in which the apparently factual gives way to something strange and unfamiliar.
In Parker’s The Collected Death of Images a beaten ‘page’ of silver has been fashioned from the particles left over from the process of 'fixing' an image with photographic chemicals. It appears almost like the surface of an old mirror carrying the suggestion that these slivers of silver might contain the ghosts of lost images.

An inclination to subvert the ordinary is shared by much of the work in this exhibition.
Iran do Espirito Santo’s sculptures dignify the familiarly banal with enormous shifts of scale and material whilst Ceal Floyer and Susan Collis question the nature of things with humour, as well as illusion. In both of their work there is an awareness of the absurd and a deceptive simplicity that belies the complexity of the ideas at work.

The essence of perception... what it means to look, and think, and look again, is another crosscurrent that unites all the artists in this exhibition.
Cerith Wyn Evans, Simon Starling and Katie Paterson all make work that originates in a territory somewhere between poetry and (often scientific) research, asking questions about perception, often on a grand scale.
In Light bulbs to Simulate Moonlight Paterson has turned our current obsession for constant daylight on its head and teamed up with the lighting specialists OSRAM to create a supply of ‘moonlight’ bulbs to last the average human life span– a spectral glow of light transmitted with identical wavelengths to those of moonlight, but also a poignant reminder that in the end all we add up to is a crate of 289 bulbs.

Mystics or Rationalists? Perhaps, in the end, a little bit of both.

Ingleby Gallery
15 Calton Road - Edinburgh
Hours: Monday – Saturday, 10am to 6pm.
Sunday 12 - 5pm (August only)
By appointment at any other time
Free admission