The exhibition Kunst und Philosophie invites artists to define for themselves a relation to philosophy: from the perspective and with the means of artistic articulation. A series of lectures examines the philosophy of the 21st Century and explores the relationship between Art and Philosophy. For the n.b.k. Showroom, Manfred Pernice develops the 'sculptural presentation' von der stange (off-the-rack), in situ and as a walkable cycle of works. 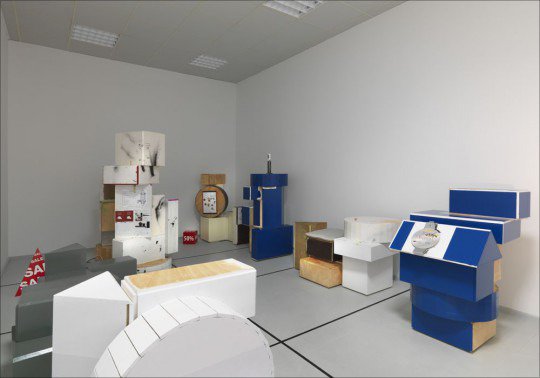 Series of lectures and workshops
The series of lectures Art and Philosophy examines the philosophy of the 21st Century and explores the relationship between Art and Philosophy. The question posed by the guest speakers is of the simplest kind: What is philosophy? For a period of eight weeks, nine philosophical lectures will be held in the premises of Neuer Berliner Kunstverein as part of the exhibition, followed by workshops with students of the Berlin Weissensee School of Art, as part of an art education project.

For the n.b.k. Showroom, artist Manfred Pernice develops the "sculptural presentation" von der stange (off-the-rack), in situ and as a walkable cycle of works. For the occasion, ten new sculptures are assembled, each one differently, yet of the same elements—archive materials, sculptural set pieces or parts of earlier works—and the material is re-evaluated in its potentiality. Similar to the method of recycling, Pernice recomposes various materials of various origins for a new aesthetic surplus value and returns them into the context of art, also reproduces them in this context. Through these combinations of "variable elements" not only the versatility of Pernice’s artistic material becomes obvious, but also the artist’s various research interests become visible in the fragments.

Anyone working with sculpture today, according to Pernice, also faces "questions of the day before yesterday." Today, the expanded concept of sculpture embraces photography, film, video and painting as components of sculpture / installation as well as a reflexive practice in relation to the exhibition space and discourses beyond. The simultaneous availability of materials, forms and (art) histories always leads back to classic questions of sculpture: How is something built / formed, which decisions were taken? Manfred Pernice transfers these questions into the presence of the exhibition at Neuer Berliner Kunstverein by the use of his post-representational gestures: in the seeming repetition of material and form his "own classicism" is overcome, and yet, the very act of the sculptor stands in the foreground: the making of a three-dimensional space within the space, which for Pernice is always conceived in a site-specific way. Here, too, his own genre is expanded: no matter how much the cycle of works refers to the space, yet, it remains a "space within a space" and "unfinished" through the unfinished, and open in its possibilities and ways of viewing things.