A Feast for Open Eyes. Smith is best known for his contributions to underground cinema but his influence extends across performance art, photography and experimental theatre. This retrospective opens with a screening of Flaming Creatures introduced by Chris Dercon, Director of Tate Modern. 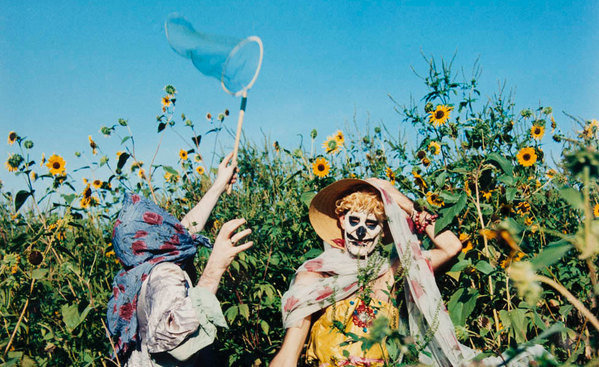 Legendary American artist, filmmaker and actor Jack Smith (1932-1989), described by Andy Warhol as the only person he would ever copy and by John Waters as “the only true underground filmmaker”, is celebrated at the Institute of Contemporary Arts (ICA) in film, performance and debate with a retrospective of Smith’s work from 7 to 18 September 2011.

Working in New York from the 1950s until his death in 1989, Smith unequivocally resisted and upturned accepted conventions, whether artistic, moral or legal. Irreverent in tone and delirious in effect, Smith’s films, such as the notorious Flaming Creatures (1963), are both wildly camp and subtly polemical. Smith is best known for his contributions to underground cinema but his influence extends across performance art, photography and experimental theatre.

A Feast for Open Eyes: Jack Smith maps out the breadth of Smith’s practice, from his collaborative film productions to his individual writings, and looks at his legacy in the UK drawing upon a generation of New York artists with whom Smith was closely involved, Jonas Mekas and Penny Arcade, and a younger generation of artists and filmmakers whom he influenced including Mary Jordan and Anna la Thew, and a host of performance artists and filmmakers based in the UK. John Zorn, a long-term Smith collaborator selects records to accompany an installation of slides documenting Smith’s work, as he used to in collaboration with Smith in the 1970s and 80s.

The retrospective opens with a screening of Flaming Creatures introduced by Chris Dercon, Director of Tate Modern. Dercon was a close friend of Smith’s and curated a show of his work at PS1 in New York. He recently discovered a box of items that Smith had given him during the course of their friendship and which will be the focus of his introduction ‘How I met Jack Smith and got rather confused’. The film is followed by a Q&A with Jonas Mekas, a founder member of Anthology Film Archives who faced obscenity charges for defending Flaming Creatures in the 1960s. He is in conversation with Dominic Johnson, author of the forthcoming monograph Glorious Catastrophe: Jack Smith, Performance and Visual Culture and co-curator of A Feast for Open Eyes.

New York-based artist, Warhol muse and close friend of Smith, Penny Arcade, performs Denial of Death, a performance inspired by conversations that took place in the last months of Smith’s life prior to his death at the height of the AIDS crisis in 1989. Penny Arcade was, with film critic J Hoberman, responsible for saving Smith’s archive before its sale to Gladstone Gallery in 2008 and the subsequent restoration of a number of films now shown in Europe for the first time.

JACK SMITH (1932-89)
Jack Smith was one of the most accomplished and influential underground artists of the 1960s, 70s and 80s and a key figure in the cultural history of downtown film, performance and art. From the late 1950s until his death from AIDS in 1989, Smith was mainly recognised for his work in film and performance. Innovative and idiosyncratic, Smith explored and developed a deceptively frivolous camp aesthetic, importing allusions to B-list Hollywood films and elements of social and political critique into the arena of high art. Less celebrated than the many people he inspired, Smith's multimedia influence is evident in the work of a broad segment of the American avant-garde - in film by Andy Warhol, Ken Jacobs, John Waters, George Kuchar, Scott and Beth B and in avant-garde theatre and performance art by Robert Wilson, Charles Ludlam, John Vaccaro, Cindy Sherman and Richard Foreman.

A Feast for Open Eyes: Jack Smith, supported by The Edwin Fox Foundation, is a collaboration between the ICA; Dominic Johnson, Lecturer in Drama at Queen Mary, University of London and author of the forthcoming monograph, Glorious Catastrophe: Jack Smith, Performance and Visual Culture; LUX, London with special thanks to Gladstone Gallery, New York.

7 September
Flaming Creatures (1963, b&w, 48 min, 16mm film) + introduction by Chris Dercon, Director of Tate Modern ‘How I met Jack Smith and got rather confused’ + Q&A with Jonas Mekas and Dominic Johnson
8pm, ICA Theatre. Tickets £12 / £10 concessions / £8 members
A screening of Jack Smith’s best-known film Flaming Creatures, which was banned at the time of its release, is introduced by Chris Dercon, Director of Tate Modern and followed by filmmaker, writer and co-founder of Anthology Film Archives, Jonas Mekas in conversation with Dominic Johnson, author of the forthcoming monograph Glorious Catastrophe: Jack Smith, Performance and Visual Culture. Mekas discusses Flaming Creatures, the obscenity charges he faced in 1964 as a consequence of defending Smith’s notorious film, and his complex relationship with Smith.