Five exhibitions. Futures 11, the third in the present series of Futures, is a sequence of exhibitions that endeavors to document and contextualise the work of a selection of artists around who exists a growing critical and curatorial consensus. Moreover, the RHA hosts the exhibitions of James Coleman, Lisa Yuskavage, James English and Charles Tyrrell. 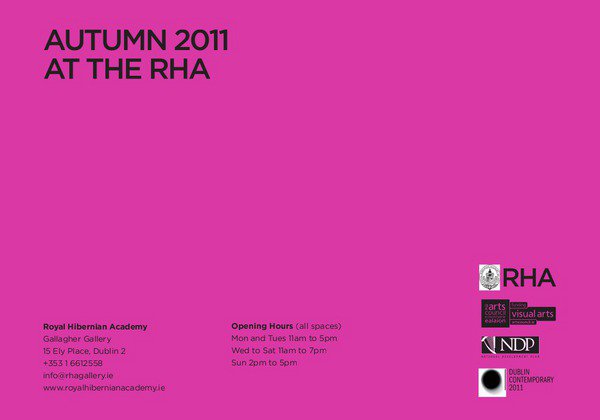 Autumn Programme of exhibitions at the RHA:

Futures 11 is the third in the present series of Futures, a sequence of exhibitions that endeavors to document and contextualise the work of a selection of artists around who exists a growing critical and curatorial consensus. The artists chosen for Futures 11 are Alan Butler, Vera Klute, Barbara Knezevic, James Merrigan and Sheila Rennick.
7 September - 23 October, 2011
Gallery I

In partnership with Dublin Contemporary 2011 at the RHA, the RHA will host two exhibitions: James Coleman and Lisa Yuskavage.

James Coleman’s video installation 2004 - 11, a work in progress, which evolves around an interpretation of a classical drama, the myth of Orpheus and Eurydice. Presented on a large LED screen, the work offers a reflection on the image and on communication in contemporary society. Born in Co Roscommon in 1941, James Coleman is recognised internationally as one of the most important and pioneering contemporary artists since the late 1960s. Over the last 40 years, Coleman’s work has transformed our understanding of the image in the visual arts, and influenced an entire generation of artists.
7 September - 31 October, 2011
Gallery III

Tragic Land. Lisa Yuskavage’s paintings have riveted global audiences since she began exhibiting in New York in the early 1990s. Since then, her fecund, no-holds barred representations of the female figure have pushed contemporary painting past pat aesthetic prohibitions and censorious instances of political correctness. A painter’s painter whose primary purpose has long been to revitalise an age-old medium ever on the verge of obsolescence, Yuskavage confects up-to-date painted clichés of women, inverting the traditional voyeuristic treatment of the female figure. This exhibition - only Yuskavage’s second museum show in Europe - is made up of eight canvases the artist made between 2008 and 2010. Selected by the artist herself along with the curators, the pictures feature fulsome figures in glowing drawing rooms and previously uncharacteristic landscapes. In an effort to bridge this exhibition and the larger Dublin Contemporary 2011 exhibition, the artist has also generously provided a panoramic pastel work for Dublin Contemporary's site at Earlsfort Terrace.
7 September - 31 October, 2011
Gallery II

James English RHA - Found beside Water
English will exhibit a new series of paintings in the RHA Ashford gallery. English’s work is quiet and attentive. A skillful talent imbued with a philosophy and an insistence on the harmonious relationship between man and nature. English can accurately be described as an intimist. He does not paint large, and while watercolours may be made plein-air, his practice is based in the studio. English is passionately interested in nature, particularly ornithology and landscape. In the latter, it is not the dramatic or sweeping topography that captivates him, rather the dynamic details of a landscape - the play of light in branches, moments of reflection, quiet habitat. This investigation of light is further pressed in his still lives. Reflective props are employed to catch the studio window or the electric light bulb. Sfumato and atmospheric, English’s still lives often juxtaposed an inanimate object with something from nature - a feather, a reed, a flower. These momento mori add a poignancy to his compositions.
7 September - 31 October, 2011
RHA Ashford Gallery

Charles Tyrrell - Selection from a New Series
Tyrrell is widely respected as one of Ireland’s most consistent, rigorous and proficient painters. In the Spring of this year Tyrrell exhibited a new series of large scale works in the Soltice Arts Centre, Navan and in the Crawford Gallery, Cork, the two venues collaborating to afford him the possibility of showing in his native county and in his adopted county, Cork, where he has lived on the Beara Peninsula since 1984. These new works are physical and robust. In many respects this work is sculptural, having more in common with the profound simplicity of Richard Serra’s sculptures and their exploration of gravity than with the issues of abstract painting. Shapes are compressed, fractured, fissured and faulted as if Tyrrell is taking the forming of the earth itself as his subject. More tectonic than topographic Tyrrell’s paintings speak of the essentiality of paint and existence, of fact and of metaphor with equal passion.
7 September - 21 December, 2011
RHA Foyer & RHA Atrium