His experiments with painting date to the 1960s, when, inspired by Abstract Expressionism, he created dynamic works noted for their raucous colors and density of gesture, combined with topical content-emotionally complex meditations on Dr. Martin Luther King, Jr., the Civil Rights Movement, and the Vietnam War. 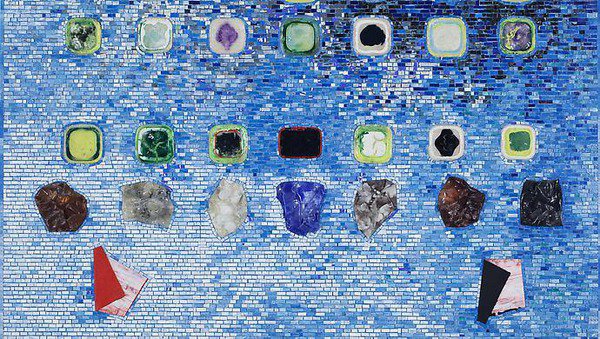 Alexander Gray Associates is pleased to celebrate the Gallery’s fifth anniversary with a solo exhibition by Jack Whitten. This is Whitten’s third show with the Gallery, and it consists entirely of new work. Anchoring the exhibition is the large scale painting, Apps for Obama (2011) crafted in Whitten’s signature method of “acrylic collage.” Spanning a spectrum of intense blues, shimmering like sky and water, the painting combines tesserae with cast forms of acrylic paint, each their own sculptural shapes and colors. A half-grid of floating forms, akin to an iPad home screen, structures Whitten’s metaphor of applications thereby implying multiple voices, choices and solutions to be harnessed in response to current political events.

Demonstrating Whitten’s ongoing experimentation between drawing and painting, eighteen associated works on paper are also on view. Densely soaked with color on Japanese paper, these drawings combine techniques of batik, monoprint, drawing and painting, resulting in a group of textural polychromed surfaces. Each small-scale work in the aptly titled Saturation series forms a larger impression through the use of bold color, layered marks and geometric forms.

Jack Whitten (b. 1939, Bessemer, AL) lives and works in Queens, NY. His experiments with painting date to the 1960s, when, inspired by Abstract Expressionism, he created dynamic works noted for their raucous colors and density of gesture, combined with topical content—emotionally complex meditations on Dr. Martin Luther King, Jr., the Civil Rights Movement, and the Vietnam War. In the 1970s, Whittenʼs experimentation turned to abstraction, when he developed a method of painting that he related directly to photography. In this work, gesture was removed from the making of the work; instead, paint and canvas were "processed”, using large troughs to hold paint and drag squeegees, rakes, Afro combs across the canvas to create surface texture, line, and voids. The 1980s saw further experimentation with paint as a metaphor for skin, with Whitten “casting” surfaces and textures with acrylic paints and compounds. These works reintroduced gesture with aspects of sculpture and collage at a time when narrative-based and didactic work was de rigeur for Black artists. In the 1990s, Whittenʼs experiments with paint as a medium moved further towards sculpture, as paint compounds were transformed into mosaic-like tiles and were applied to canvases, referencing ancient architecture and murals. In this work, and into the current work, memorial and persona became sources for content, as works paid homage to celebrated figures and close friends of the artist.

Whittenʼs work was included in the 1969 and 1972 Whitney Annuals, the landmark 1971 exhibition, Contemporary Black Artists in America at the Whitney Museum, Energy/Experimentation: Black Artists and Abstraction 1964–1980 at the Studio Museum in Harlem (2006); High Times Hard Times: New York Painting 1967–1975, organized by Independent Curators International (2006); and Greater New York/The Comfort of Strangers, MoMA/PS1 (2010). In Summer 2007, MoMA/PS1 presented a solo exhibition, juxtaposing Whittenʼs epic 2005 painting, 9/11 with paintings from the 1960s; Atlanta Contemporary Art Center organized an exhibition of Whitten's memorial works in 2008; in Spring 2011, Whitten made a debut solo exhibition at Zeno X Gallery, Antwerp. His work is in the permanent collections of the Metropolitan Museum of Art, New York; the Whitney Museum of American Art, New York; the Museum of Modern Art, New York; the Studio Museum in Harlem, New York; the Birmingham Museum of Art; Harvard University Art Museums, Cambridge, MA; the High Museum of Art, Atlanta; the Cleveland Museum of Art; and the Dallas Museum of Art.

Alexander Gray Associates is a contemporary art gallery based in New York. The gallery has established a profile for high-quality exhibitions focused on mid- career artists who emerged in the 1960s, 1970s, 1980s, and 1990s. Influential in political, social and cultural spheres, these artists are notable for creating work that crosses geographic borders, generational contexts and artistic disciplines.