The eye is a lonely hunter: images of humankind. The 4th edition of the Fotofestival Mannheim_Ludwigshafen_Heidelberg takes as its point of departure a humanist perspective in the tradition of documentary photography. It features a variety of practices that are situated at the intersection between documentary and artistic photography, practices that are characterised by a strong sense of visuality but also a keen sense of sociopolitical awareness. 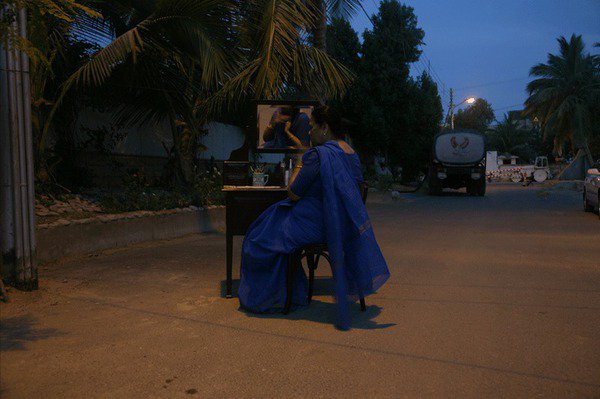 For the fourth time, from September 10–November 11, 2011 the three cities of Mannheim, Ludwigshafen and Heidelberg will host Germany's most exceptional photography festival.

Entitled THE EYE IS A LONELY HUNTER: IMAGES OF HUMANKIND, the exhibition will include 56 artists from 32 countries, and is curated by Katerina Gregos (GR/BE) and Solvej Helweg Ovesen (DK/D). The 4. Fotofestival will focus on the new and critical ways photography transports anthropological knowledge and aims to be a photographic survey of the human condition as we enter the second decade of the 21st century, seen from a plurality of geographic angles, including Africa, the Americas, Europe and Asia. Using a variety of lens-based media, which reflect the expanded nature of contemporary photography, the artists' works draw on the traditions of documentary, ethnographic and staged photography to critically reflect on the anthropological role of photography today, often taking as their point of departure a humanist perspective in the tradition of documentary photography. What would a portrait of humankind look like in 2011? What are some of the key issues and challenges facing humanity today and how are they represented? How can photography create empathy and evoke affect?

The title of the exhibition „The Eye is a Lonely Hunter" is inspired by Carson McCullers' book "The Heart is a Lonely Hunter" (USA, 1940), in which the mistreated, rejected, marginalised and forgotten in society are given voice. Many artists in the exhibition operate as interdisciplinary researchers, spending time to gain in-depth knowledge about the context they live or worked within, in a process of long-term engagement. Their work explores the most important issues currently affecting humanity, the human condition and human experience in the light of post-colonial discourse, globalisation, multi-culturalism, and geo-political, economic and environmental shifts. In doing so, it reflects a renewed ethical engagement with photography and the issue of humanism.

Kunsthalle Mannheim
ROLE AND RITUAL
Rituals are essential formats of actions creating and sustaining human culture, spirituality and sociality. Rituals are both historically inherited and contemporarily invented collective actions ordered in a commonly known dramaturgy, often ‘directed’ by a leading person. Through rituals humans experience, partake of and interpret communal events, whether celebratory or shocking, and these events confirm as well as generate a sense of collective experience – in some cases also consciousness.

The theme Role and Ritual is unfolded through artistic and anthropocentric ‘case studies’ of local ritual culture and role-playing cited in a postcolonial, global context.

This exhibition presents documentations of rituals focusing on their appearance and the social roles and codes manifested therein. Here, also the role of the artist as researcher – as the ‘lonely hunter’ for specific situations and images – is reflected as regards the cultures and peoples observed.

ZEPHYR of the Reiss-Engelhorn-Museen
THE AFFECT AND EFFECT OF POLITICS
How do the decisions that politicians make (or don’t make) affect our lives in real, tangible ways? What are the effects of political practice or malpractice?

The Affect and Effect of Politics explores the real, tangible effects of politics on human beings and how these are imprinted on the physical environment: on landscapes, buildings, and social spaces; but also how they impact humans psychologically. The exhibition focuses on the legacy of colonialisms and empire, current political upheavals and their repercussions, the politico-economic entanglements of the West beyond its own borders, and the new realities of the emerging economic super-powers in developing countries. While most of the information we get about politics is transmitted through the media, this information comes to us from a dispassionate distance. This category of the festival thus aims to re-emphasize the capacity of photography to generate affect and empathy in relation to issues that often seem at a "safe distance from home", as well highlighting photography’s capacity to inform and generate vital knowledge that often escapes the public mainstream media discourse.

Wilhelm-Hack-Museum
ECOLOGICAL CIRCUITS
Ecological Circuits explores the changing relationship of man to the natural environment, a relationship that has been constantly shifting and has become increasingly critical during our times. Interventions by human beings into nature and natural resources, such as exploitation, redistribution and consumption of raw materials, have dramatically impacted ecological circuits throughout the world. Melting ice caps redefining the Arctic landscape; oil, coal and gas being extracted and consumed at breakneck speed; explosive urbanisation all over the planet and cities expanding like fast-growing forests: all these are symptoms of a worrying ecological pathology. The photographs presented in Ecological Circuits generate a visual consciousness of the effects of unchecked human intervention on nature and natural resources, the vicious cycle of production and consumption, but also indicate a drive to a new ecological consciousness and responsibility we all face at the dawn of the twenty-first century.
Wilhelm Hack Museum

Kunstverein Ludwigshafen
Bismarckstrasse 44-48 | 67549 Ludwigshafen
The PractICe of Everyday Life
This sub-theme consists of a photographic investigation into the organisation, performance and ‘personalising’ of everyday life, a task all human beings face. It is inspired by the homonymous book, by the sociologist Michel de Certeau, The Practise of Everyday Life, where he investigates how human beings individualise culture, and alter or modify things in order to make them ‘their own’. How do we go through the processes of daily actions, necessities, and routines? How do we devise strategies that get us through the quotidian?

The exhibition focuses on an important aspect of the practice of everyday life, namely the possibilities and inabilities of individual agency both as a kind of communication of a microcosmic worldview and as an example of the will to survive.

Heidelberger Kunstverein
LIFE CYCLES
A life cycle represents an existential curve including being born and passing away, the trajectory of an individual existence. The photographs in Life Cycles capture and cut through the existential moments of biographical importance that impact upon and eventually constitute our subjective experience of the world and the deeper bliss or painful hardship of life. This exhibition venue therefore showcases the classical symbolic manifestations of the movement of life from one state to another – the so-called ‘rites of passage’ – such as wedding ceremonies or burial practices but it also provides insight into the different conditions that human beings are subjected to in their various life stages, and explores how these appear as photographic testimonies: from the amateur family album, and the still life photograph to the carefully staged allusive portrait.
Heidelberger Kunstverein

Sammlung Prinzhorn
Solo Show ROGER BALLEN
Roger Ballen’s point of departure is sociological and anthropological, with a focus on the disenfranchised, the marginalised and the peripheral. His subjects are staged in gloomy and shabby domestic settings, resulting in powerful, disturbing and alienating pictures, which transcend voyeurism and venture into the territory of the affective. His series Outland (1987–2000) captures the life of the isolated and poor rural white population, who lost any privileges they had with the end of the apartheid and left many in a psychological state of shock. The images in Shadow Chamber, from the first decade of this century, are even more haunting. They picture estranged, psychologically shaken people in grubby rooms, sometimes accompanied by pets. These photographs capture with great empathy the daily life of people living almost entirely outside of society: a telling and intense psychological document of bare life.
Sammlung Prinzhorn


halle02/Kunsthalle
Solo Show TOBIAS ZIELONY
German photographer and artist Tobias Zielony has been invited to make a solo presentation at the newly renovated Kunshalle Heidelberg, halle02. For over a decade Zielony has observed and documented the nocturnal life of suburban Germany, Poland, Canada, USA, France and Italy. His images depict youths hanging out and posing in petrol stations, car parks and deserted social housing estates. The series Quartiers Nord (2003) and Vele (2009-10) both deal with the alienating architectures and social relations. Quartiers Nord consists of a series of nine photographs taken in the northern part of Marseille, where the population is largely Algerian or North West African. Vele is a series of 17 images in various sizes from a social housing complex in the north of Naples. Le Vele is the name of the complex and optimistically means ‘The Sails’, but was squatted by Mafia families before the building was finished and nowadays has become the drug-dealing centre of the city. Zielony has recorded the bombastic yet fantastical architecture of concrete and metal at night, with its vast passageways and blocked perspectives becoming a visual metaphor for the estate’s social life. Zielony aims to capture the heart of an urban site and what it means to a youngster. Local youth cultures all around the world share the fact that they are inspired by global culture – film, fashion, drugs and music – which are adapted as 'styles' of representation of identity, and it is these aspects that are apparent when the youth are photographed

An extensive fringe programme (portfolio reviews, lectures, guided tours and artists' talks) will accompany the exhibitions, including the award ceremony of the noted Cultural Prize of the Germany Association of Photography (Deutsche Gesellschaft für Photographie / DGPh). The Cultural Prize 2011 will be awarded to Prof. Klaus Honnef on Oktober 8, 2011 at the Heidelberger Kunstverein.

A 240-page colour catalogue designed by Studio Manuel Raeder and published by Kehrer Verlag will be produced to accompany the exhibition. It will include texts by the curators as well as TJ Demos.