Attack of the Bricks: Star Wars. Familiar Star Wars characters are the subjects of his solo exhibition of new photography. Composed of Legos, they mimic the cinematic style of the Lucas films, transforming tiny bricks into legendary, larger-than-life Sci Fi stars. 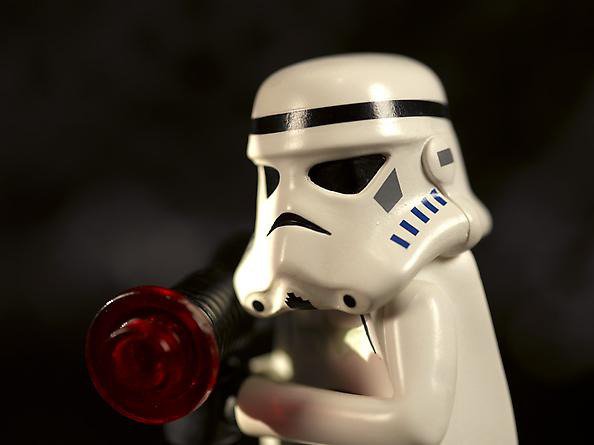 GERING & LóPEZ GALLERY is pleased to present Attack of the Bricks: Star Wars, a solo exhibition of new photography by David Levinthal. This will be the artist's second solo exhibit at the gallery.

Familiar Star Wars characters are the subjects of Levinthal’s most recent series. However, these epic visages are composed of Legos, as Levinthal has in his signature fashion transformed these miniature action figures into powerful action heroes. These photos mimic the cinematic style of the Lucas films, transforming tiny bricks into legendary, larger-than-life Sci Fi stars.

Contrast is central to this series, as the figures are placed in front of monochromatic black backgrounds. The lighting is sharp, resulting in even more intimidating intergalactic machines, weapons, and their famed operators. The black and white walls of the exhibition’s installation further emphasize this contrast. Levinthal's standard use of a narrow depth of field, soft focus, and the photographic trope of enlargement seen in his close-up shots bring a sense of life to the objects in the foreground. However, he does not attempt to completely remove all traces of the Lego aesthetic, allowing his viewers to see what is at play in his creation and representation of “outer space.” The photos showcase the humanized drama such toys have to offer to the imaginative.

Moving away from Polaroids, these photographs are pigment prints on Hahnemule Fine Art Photo paper. Since 2007, Levinthal has been shooting with his Hasselblad H1 fitted with a digital Leaf back. This enables him to view the shots as he is working on each one, perfecting it immediately to best fit his vision. Then the digital files are processed and he begins making proofs in the studio. In some ways, it is very similar to Levinthal’s process at the Polaroid studio because he is able to shoot, see the photograph immediately, and then have full control over the photographic print that is made onsite.

For further information please contact Julie Bills at 646.336.7183 or julie@geringlopez.com.