In 'Cosmic Voodoo Circus', Biggers exploits the carnival aesthetic to address profound issues of identity, the power of objects, as well as spiritual and cultural transmigration. The second exhibition 'Short Stories' navigates the fabricated spaces of representation. It questions the role of art historian and critic as the best readers of an artwork, favoring instead the internal logic and fiction of the artist's practice. 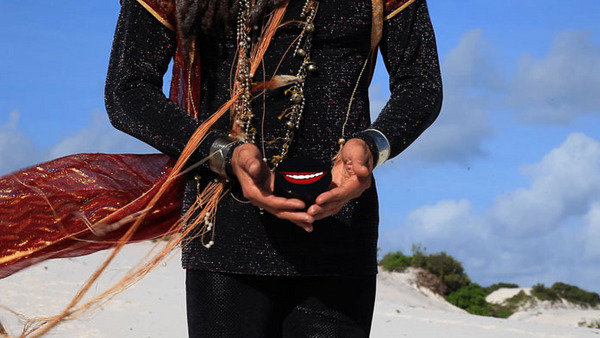 SculptureCenter is pleased to announce Cosmic Voodoo Circus, an exhibition of new work by Sanford Biggers commissioned through SculptureCenter's Artist in Residence program. Merging modern and post-modern strategies with vernacular forms, Biggers studies and posits historical and contemporary subjectivity as a fluid and multivalent concept. Cosmic Voodoo Circus is curated by Mary Ceruti, SculptureCenter's Executive Director and Chief Curator, and will be on view September 10 - November 28, 2011.

In Cosmic Voodoo Circus, Biggers exploits the carnival aesthetic to address profound issues of identity, the power of objects, as well as spiritual and cultural transmigration. At the center of Biggers' installation is a new video titled Shake, the second part in an odyssean trilogy about the formation and dissolution of identity. Shot in Brazil with a Creative Time travel grant, Shake follows Ricardo Castillo, a Brazilian-born, Germany based, choreographer, clown, stuntman and DJ, through a transformative journey from the ocean through the favelas, to a colonial palace eventually returning to the sea as an androgynous silver-skinned figure. (The first video in the trilogy, Shuffle, will be on view at the Brooklyn Museum of Art, beginning September 23, 2011 as part of Sanford Biggers: Sweet Funk - an Introspective.) The installation will also feature several new sculptures including an empty trapeze swinging overhead like a pendulum, a suspended sculpture based on a pair of African spirit sculptures constructed from fabrics including seersucker and quilts, and a billboard sized minstrel-like toothy grin, a recurrent image in Biggers' work.

Opening: September 10th, 5-7pm and is open to the public.

SculptureCenter is pleased to announce a unique exhibition series Short Stories, guest curated by Isla Leaver-Yap. Short Stories navigates the fabricated spaces of representation. It questions the role of art historian and critic as the best readers of an artwork, favoring instead the internal logic and fiction of the artist's practice. The series will feature rotating solo exhibitions by six New York-based artists, an onsite reading room, as well as readings and performances. Exhibiting artists include: Alejandro Cesarco, Iman Issa, Ursula Mayer, Ben Schumacher, Danna Vajda and Rona Yefman. The reading room, configured in collaboration with Angie Keefer, also features work by Sarah Chacich, Matt Keegan, and Rita Sobral Campos. Short Stories will be on view September 10 - December 4, 2011.

During each month of Short Stories, SculptureCenter's lower level galleries will be turned over to two artists who will each present an autonomous exhibition project. The rear ground floor gallery, meanwhile, will be transformed into a reading room, a locus and constant throughout the duration of project. It will feature art works, books selected by the artists in relation to their exhibition presentations, commissioned texts, audio works and other ephemera. This space will act as a site of production and dissemination, where the accrual of material will also serve as the documentation for Short Stories. Finally, in the closing week of Short Stories, the main gallery will be used as an event space by participating artists to feature performances, screenings, and talks.

Through the artist independently fashioned narratives, Short Stories presents work engaged in the architecture of how to read and write the object, the image, and the practice. Short Stories takes the notion of 'reading' as a framework through which an artist might begin to construct personal positions and self-determined subjects.

For additional information or images, please contact Frederick Janka at 718.361.1750 x117 or press@sculpture-center.org