An exhibition curated by Eric Troncy for the 13th Prize Fondation d'entreprise Ricard with Erwan and Ronan Bouroullec, Gaetan Brunet and Antoine Espinasseau, Erwan Frotin, Corentin Grossmann, Adrien Missika, Loic Raguenes. The Prize consists in the purchase of a work of the winner. The work is then donated to the Centre Pompidou, which presents it in its permanent collection. 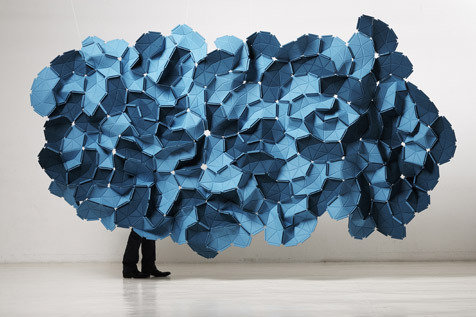 «The European seabass is a primarily ocean-going fish that sometimes enters brackish and fresh waters. Its habitats include estuaries, lagoons, coastal waters and rivers. It is found in the waters in and around Europe. It is mostly a night hunter, feeding on small fish, polychaetes, cephalopods and crustaceans.

The fish has come under increasing pressure from commercial fishing and has recently become the focus in the United Kingdom of a conservation effort by recreational anglers. In Italy the bass is the subject of intensive breeding in salt waters. In the Republic of Ireland, there are strict laws regarding bass. All commercial fishing for the species is banned and there are several restrictions in place for recreational anglers, a closed season May 15- June 15 inclusive every year, a minimum size of 400mm, and a bag limit of two fish per day.

European seabass was one of the first types of fish after salmon to be farmed commercially in Europe. The annual production is some 60,000 tonnes and is increasing quickly. » (Wikipedia)

Antoine Espinasseau and Gaétan Brunet were both born in 1986, the first one in Challans, Vendée, the second one in Neuilly. They attended the Ecole Nationale Supérieure d’Architecture in Versailles, and currently live in Paris. They are urban planners, architects, and work for the agency L’A.U.C. in Paris.

Erwan Frotin was born in 1978 in Toulon. He studied at the ECAL in Lausanne.
He currently lives in Paris.

Corentin Grossmann was born in 1980, in Metz, where he attended the art school.
He currently lives in Berlin.

Adrien Missika was born in 1981 in Paris. He studied at the ECAL in Lausanne.
He currently lives in Berlin.

Loïc Raguénès was born in 1968 in Besançon. He attended the art schools of Besançon and Nimes, and was the assistant of Rémy Zaugg for two years.
He currently lives in Dijon.

The curator:
Éric Troncy was born in 1965 in Nevers. He studied at the Ecole du Louvre and at the Ecole des Hautes Etudes en Sciences Sociales. He is co-director of the Contemporary Art Center The Consortium since 1996, and co-founder of the review Frog.
He currently lives in Dijon.

The 13th Prize Fondation d'entreprise Ricard:
The 13th Prize Fondation d'entreprise Ricard will be awarded to one of the artists featured in the exhibition “The Seabass.” on the occasion of the Bal Jaune on October 21, 2011. The Prix is awarded by a jury of collectors, friends of great contemporary art museums, and curators of the previous exhibitions of the Prize Fondation d’entreprise Ricard. The Prize consists in the purchase of a work of the winner. The work is then donated to the Centre Pompidou, which presents it in its permanent collection.
The winners of the twelve previous Prize Fondation d’entreprise Ricard were Didier Marcel (1999),Natacha Lesueur (2000), Tatiana Trouvé (2001), Boris Achour (2002), Matthieu Laurette (2003), Mircea Cantor (2004), Loris Gréaud (2005), Vincent Lamouroux (2006), Christophe Berdaguer & Marie Péjus (2007), Raphaël Zarka (2008) and Ida Tursic & Wilfried Mille (2009).
Finally, the works of Isabelle Cornaro and Benoît Maire, which were awarded the Prize in 2010, will be integrated in the new displays of the permanent collection of the Centre Pompidou on October 11, 2011.

Fondation d'Entreprise Ricard
12 rue Boissy d'Anglas - Paris
Free admission from Tuesday to Saturday from 11 am to 7 pm
Guided tours on Wednesdays at 12:30pm and Saturdays at 12:30 pm and 4:00 pm.
Free admission