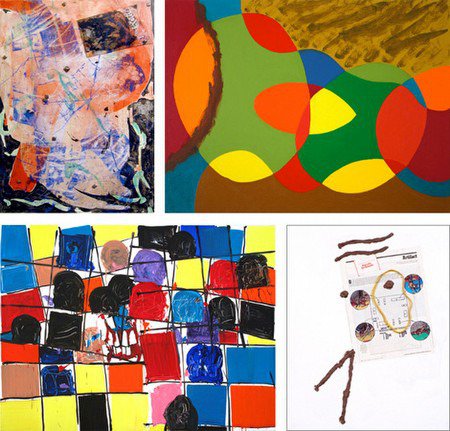 Thomas Erben is pleased to present a grouping of paintings by Whitney Claflin, Harriet Korman, Nolan Simon and Hans-Peter Thomas (Bara). These painters generally use enjoyable colors, friendly geometric shapes sometimes veering into the anthropomorphic, and repertoire abstract styles. Though at first glance accessible, closer inspection reveals a great variety of painterly and conceptual idiosyncrasies. The works are permeated by a sense of instability, as they all derive energy from the tension between conflicting states, in form as well as content. Since conditions are constantly shifting and the only certainty is change, embracing the unstable allows these artists to remain on the fluctuating edge.

Whitney Claflin’s (b. 1983, Providence, RI) chest-sized abstractions integratecollage elements (stitching, jewelry, newspaper, clothing) with paint transferred from paper and plastic onto fabric, as a distancing process. Claflin’s works, which at first glance might appear to lack stability, are in fact held together by subtle, compulsively used elements. A draped necklace here, an earring hoop there, a bit of thread or a spot of glitter combine to allude to an ad-hoc way of living. With clothing and jewelry as metonyms, each work becomes a dressed character - some have secrets, some are ready to "hit the town." Mobilizing the colorful excess Claflin encounters in her Chinatown studio surroundings, by mixing handmade and readymade objects, she invites the viewer to grasp onto certain signifiers within a disorienting context. This internal tension grants agency to fall in and out of stride with the works, building meaning based on cumulative ways of looking.

Claflin received her BFA from RISD, 2005, and her MFA from Yale in 2009; most recently, she had a solo exhibition with Real Fine Arts, Brooklyn, 2010, and participated in The Open, a survey of emerging art, Deitch Projects, Long Island City, as well as Space Is A Place, Portland Institute for Contemporary Art. She lives and works in Brooklyn.

Harriet Korman’s (b. 1947, Bridgeport, CT) paintings are almost stubbornly non-figurative, refusing to submit to any persuasion of naturalistic illusions. Using bold, solid colors, sometimes transected by lines of varying character, she divides the canvas into fields and geometric shapes, giving each color block the opportunity to interact with others. Though Korman’s work is grounded in Modernist abstraction, she adds elements of irregular unpredictability, creating a slight but crucial imbalance in each piece. Viewers are continuously forced to revalue their impression, trying to find equilibrium among decisive but unstable fields.

Korman has been exhibiting since 1970. She has appeared in the Whitney Biennial three times and is represented in multiple private and institutional collections. She has taught at FIT for over 20 years and continues to be an important voice in
the discussion on abstraction. In a 2001 New York Times review, Ken Johnson placed Korman’s work in the company of Klee, Miró, Kandinsky, and Mondrian. She is represented by Lennon, Weinberg where her 2008 show New Paintings was exhibited to
critical acclaim, and where she has a forthcoming exhibition in March, 2012. Korman lives and works in New York City.

The polite palette, easy forms and generously applied paint of Nolan Simon (b. 1980, Detroit, MI) lend his work an immediate pleasantness. He uses smile forms, dots, and “sausage” shapes, often piping with white or beige caulk to create thick, sculpted
lines, which sit upon thin oil paint washes or bare, primed canvas. Occasionally Simon will integrate text, such as “Excuse Me” or “Yes!” contributing to the works’ friendly disposition. In fact, these sparse canvases challenge the viewer to dislike them and, through this lack of compliance, become mischievous – are you supposed to like his work? And what if you do? This negotiation/re-negotiation cycle with the viewer is what keeps Simon’s seemingly effortless paintings on a precarious edge: falling neither into cheeky nor saccharine territory.

Simon received his BFA in 2005 from the College for Creative Studies; most recently, he has had solo exhibitions with Cave, Detroit, 2011, and Public Surface, Stockholm, 2009. He also participated in a group exhibition in 2010 entitled 179 Canal /
Anyways, White Columns, New York. He has a forthcoming solo show with 47 Canal, New York, in 2012. Simon currently lives and works in Brooklyn.

Hans-Peter Thomas (Bara) (b. 1968, Bonn, Germany) demonstrates an interest in grids and shelving as comparative devices, as if systematically displaying a personal set of symbols and objects for the viewer to inspect. This selection of paintings is comprised of sprawling, superimposed grids populated by rectangles of bright color, teeth and head shapes, as well as actual physical objects such as rubber masks and perfume bottles. The color and images create a crowded cacophony of items to interpret and synthesize into workable information. Arrows hint at relationships between the objects depicted, but rather than being helpful and clarifying, they add further to the confusion. And as much as items are sorted into neat boxes, there is a competing impulse striving toward disorder, tilting and overturning stable structures and tipping the paintings into a state of perilous balance. Thomas graduated from the Art Academy of Munich in 1997; most recently, he has had solo exhibitions at Galerie Bernd Kugler, Innsbruck; Wonderloch Kellerland, Berlin; and Kunstverein Oldenburg. Group exhibitions include Fahnemann Projects, Berlin; Galerie Nosbaum & Reding, Luxemburg; Galerie artThiess, Munich; and Lead Apron, Los Angeles. He currently has a solo show at Ben Kaufmann Galerie in Berlin. Thomas received the MAK Schindler grant, MAK Center Los Angeles, 2009. He currently lives and works in Los Angeles and Berlin.