The central motif in Guenther's installation is an aquarium with a "talking fish" - a microphone immersed in the water broadcasts any communication the fish may emit during the course of the show. In addition he presents a series of new mixed-media, papier-mache on canvas collages. 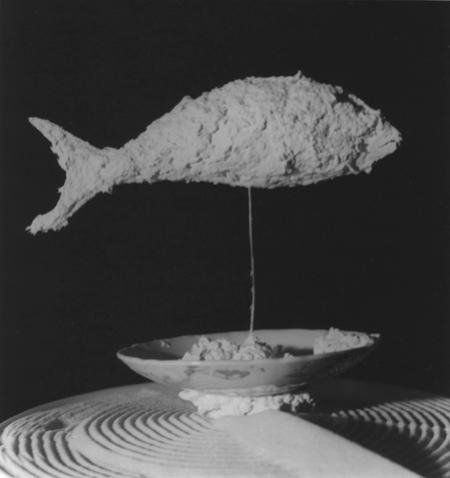 "Like the bodiless heads you see sometimes in circus sideshows, it is as though I have been surrounded by mirrors of hard, distorting glass. When they approach me they see only my surroundings, themselves, or figments of their imagination-indeed, everything and anything except me." (Ralph Ellison 'Invisible Man')

"The mechanisms used to produce sound vary from one family of cetaceans to another. Marine mammals, such as whales, dolphins, and porpoises, are much more dependent on sound for communication and sensation than are land mammals, because other senses are of limited effectiveness in water. Sight is less effective for marine mammals because of the way water absorbs light." (Wikipedia - 'Whale Sounds')

As a multi-media artist Andrew Guenther defies quick categorization. To experience his art is to embrace a combination of experiences and visual sensations simultaneously: spiritually, physically, conceptually. He trips the light fantastic between a variety of media with ease, and his new exhibition "Talking To A Fish and Paraphernalia" @ F+V is no exception.

The central motif in Guenther's installation is an aquarium with a "talking fish" - a microphone immersed in the water broadcasts any communication the fish may emit during the course of the show. There is an animation screen behind the aquarium which features a dialogue between Mother Earth, Johnny Appleseed and Dr. Dolphin, the sound for which travels through underwater audio devices which Guenther built. There is a speaker emitting the synced audio entering one side of the tank and a receiving element exiting to external speakers on the other side, providing an off-chance for the fish to speak to people outside of the tank.

Part Mother Goose, part Joseph Beuys' coyote gallery habitation, Guenther presents a simple narrative with serious overtones: the trials and tribulations of Mother Earth as seen though a fisheye lens - a firsthand report from the frontlines of environmental consciousness. But Guenther is never didactic or heavy-handed in his narrative - like a puppeteer, he presents the elements in his theatre with a directness and lightheartedness which is as entertaining as it is sophisticated.

In addition Guenther presents a series of new mixed-media, papier-mache on canvas collages featuring his trademark "plate-face" women and hotdog men. Combining the abstract with the recognizable, Guenther shares more playful insights into a chronically absurd and dysfunctional planet - and never without humor.

Andrew Guenther has exhibited widely in New York, LA, and internationally, including: "Standing in Water up to the Shins, Your Foot Looks at a Minnow and Says,'Look What I Have Become!'" at David Castillo Gallery, Miami, and "The Slap of Bird Shit On Wet Pavement" at Mogadishni, Copenhagen. Guenther was born and raised in Wheaton, Illinois, studied undergrad in Wisconsin and Rome and received his MFA at Rutgers in 2002. He curated an artist's storefront space, Arts Tropical, in Brooklyn for a few years. He currently lives and works in Brooklyn, NY, and is a proficient urban gardener who grows his own tobacco, berries, and grapes.