The exhibition refers to the contemporary art scene in Argentina. The military architecture of the Fort is a signal of both entrenchment and the frontier, with its connotations of isolation and confinement: the special identity of the location and the events in Argentinean artistic life are the basis for the line of thought about the changes in the power structures that continue for a large part to govern our daily lives. 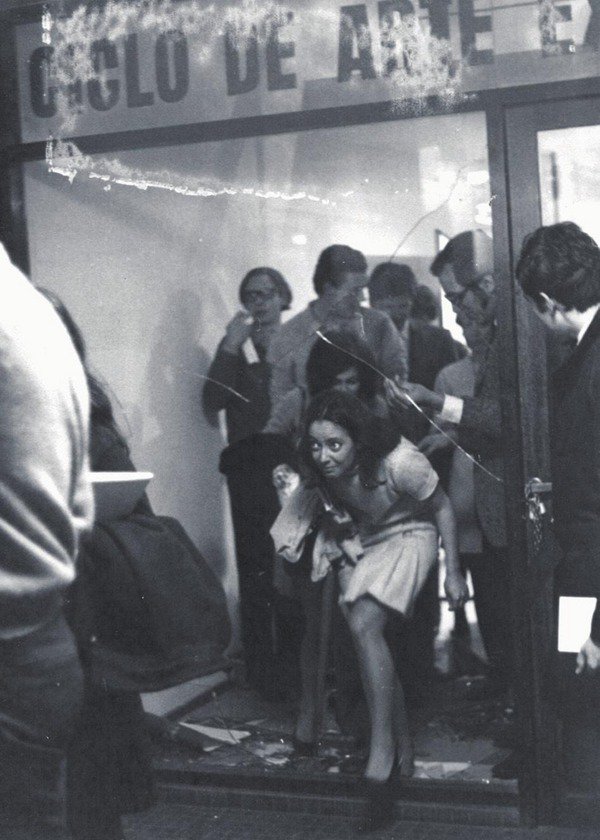 Curatorial statement:
We have been invited to develop an exhibition relating to the contemporary art scene in Argentina in the setting of this now disused military fort, which in the 19th century formed part of the defences of the city of Lyon. The military architecture of the Fort, with its connotations of isolation and confinement, is a signal of both entrenchment and the frontier.

This site made us think straightaway of the Argentinean artist Graciela Carnevale: At the official opening of her exhibition at Rosario in October 1968, she locked the public into the gallery premises for over an hour. This militant action came to an end when a passer-by broke the window, covered at the time by posters for the exhibition. Once the public had been set free, the artist handed out a pamphlet to them recounting the experience of imprisonment and forced participation they had undergone, so drawing attention to the daily acts of violence perpetrated by the military forces during the dictatorship. This artistic action echoed the situations of other countries in South America then under the oppressive rule of dictators, as well as the wave of popular protest marking the end of that decade in the West, which spread opposition to authoritarian regimes.
The special identity of the location and this outstanding event in Argentinian artistic life are the basis for our questioning of the changes in the power structures that to a large extent determine our daily lives.

Today, more than forty years after that event, we feel it is relevant for us to question the forms of resistance that persist and are evident within contemporary artistic aesthetic attitudes in Argentina, and South America more generally. We want to elucidate what these unique territories enable us to perceive of the world, and what it is in personal stories that runs through collective history.
These territories are today weakened by North-South bipolarity and the vertiginous gulfs between the wealth derived from the dominant economic paradigms.
The show we are proposing sets out to give an account of how contemporary South American artists look at things, so highlighting the signs of our contemporaneity and revealing the links and implicit correspondences that each of them weaves across the world.

“Coup d’éclat” makes reference to an unrehearsed decision to speak up that attracts attention; to be more precise, in the context of our show, the expression is a reference to the gesture of that passer-by who freed the people shut in by Graciela Carnevale by breaking the gallery window. The artists brought together in this exhibition in their turn speak up regarding the coercive powers of political and economic issues and the models the latter impose on individuals.
Some, often with irony, criticize the workings of the dominant system and uncover its contradictions; others reflect the ambiguous role of the frontier and the separatist entrenchments that result from it. Yet others divert the relationship to the structures of power, displacing their symbols and decontextualizing their functions, or question collective memory and the staging posts through which each person fashions his or her own identity.

We are pleased to thank Victoria Noorthoorn, head curator of the 11th Lyon Biennial for her contribution within the project. We also thank all the artists in the exhibition and the following galleries:
Galleries: Elba Bénitez - Madrid, carlier I gebauer - Berlin, Figge von Rosen - Berlin / Cologne, Nogueras Blanchard - Barcelona, Diana Stigter - Amsterdam.

Fort du Bruissin / Administrator: Christophe Moussé / Stage manager of the exhibition: Vincent Desmures.
Built after the Franco-Prussian War of 1870 by General Seré de Rivières, described as the “19th-century Vauban”, the Fort du Bruissin is part of the defence system of France’s eastern frontier, and particularly of the city of Lyon. This dug-out fort covering more than 3000 sq. m. is located in 10 hectares of woodland. After being restored and renovated by the municipality of Francheville in partnership with the State, the Rhône-Alpes Region and the Rhône Department, since 2008 it has housed a centre of contemporary art.