The exhibition focuses on contemporary artists exploring public platforms for communication and social networks through an aesthetic and conceptual lens. In an era of increasingly omnipresent new technologies, the show examines the impact of these systems as they transform human expression, interaction, and perception. With works by Christopher Baker, Aram Bartholl, David Byrne, Jonathan Harris, Robert Heinecken, Miranda July & Harrell Fletcher, Sep Kamvar and Penelope Umbrico. 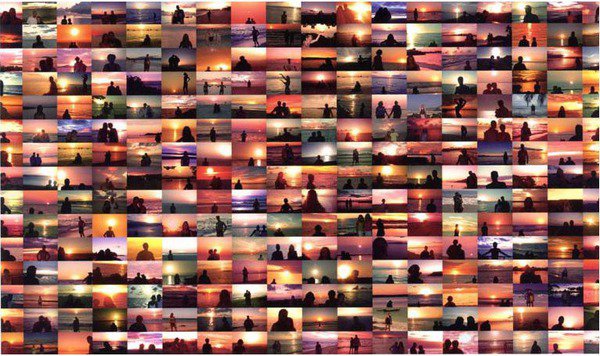 The Pace Gallery, Pace/MacGill Gallery and the MFA Photography, Video and Related Media Department at the School of Visual Arts are pleased to present Social Media. The exhibition focuses on contemporary artists exploring public platforms for communication and social networks through an aesthetic and conceptual lens. In an era of increasingly omnipresent new technologies, Social Media examines the impact of these systems as they transform human expression, interaction, and perception. The exhibition will feature works by Christopher Baker, Aram Bartholl, David Byrne, Jonathan Harris, Robert Heinecken, Miranda July & Harrell Fletcher, Sep Kamvar and Penelope Umbrico. Social Media will be on view at 510 West 25th Street from September 16 through October 15, 2011.

David Byrne’s Democracy in Action, 2011, is a multi-media installation consisting of 20 digital frames — commonly used to auto-display sentimental family snapshots — that instead shuffle images of arguing parliamentarians pulled from the Internet. The photojournalistic images, which capture the tiered speaking arena and the diving and wrestling of politicians in suits, become animated as they rotate through the digital frames, as though underscoring the volatile democracies and defunct capitalistic societies over which the parliamentarians quarrel. "The idea of pictures in sequence has been around for a long time," Byrne says. "Photo essays, photo books and slide shows all support the idea that multiple views of something, someone or someplace add a kind of cubist depth. I realized that this possibility had become something anyone could make at home and display for their friends and family with the advent of these (somewhat) cheap digital frames. I liked the idea of taking this consumer technology, this gadget with somewhat tacky and sentimental associations, and tweaking it a little." The exhibition will also feature the first presentation of works from the artist's new Apps series from 2011. The works are advertisements for witty applications authored by Byrne that speak to the rapid proliferation of apps for the iPhone and other smart phones, playing on the promise of convenience, connection and distraction. Each pigment print is approximately 20 x 30 inches with hand-painted logos. Concurrent to Social Media, a new largescale outdoor installation by David Byrne will be installed in the lot beneath the newly opened second section of the High Line, adjacent to Pace's 510 West 25th Street gallery. The work, entitled Tight Spot, is an inflatable sculpture with internal sound components. It will be on view through October 1, 2011.

Learning To Love You More, 2002–2009, from the collection of the San Francisco Museum of Modern Art, is a project consisting of both online and non-web components by Miranda July and Harrell Fletcher. The interactive website invited visitors to create responses to specific assignments, visually document the outcomes, and submit them to an ongoing series of exhibitions, screenings, and radio broadcasts presented worldwide. Assignment #68 Feel the News will be on view here for the first time. The assignment asked the audience to watch a segment from democracynow.org, select someone from the news that made an impression on them, and "act out a moment of their day today." All assignments were documented via photography and emailed to the site with a caption. Examples included "Monday, August 13, 2007: After Resigning as Presidential Advisor, Carl Rove Looks into The Refrigerator" and "Monday, August 13, 2007: Kim Kyung-ja, One of Two South Korean Hostages Freed In Afghanistan Today, Takes Off Her Shoes."

Google Portrait Series, 2006–2011, by Aram Bartholl, addresses the multifaceted nature of portraiture in the modern digital age. Each "portrait" commissioned for the exhibition is a hand-drawn, working QR-code that — when decoded by a smart phone — links to a Google search for the individual, reflecting the continuous evolution of the subject's virtual representation in a digital age. The portraits of Ai Weiwei, Amy Winehouse, Barack Obama, Bre Pettis, Penelope Umbrico, among others, will be on view.

Penelope Umbrico identifies trends in online visual culture using the image hosting and photo-sharing website Flickr in Sunset Portraits from 9,623,557 Flickr Sunset Pictures on 8/22/11, 2011. The work is an expansion on the artist’s 2006 project Suns (from Sunsets), in which Umbrico explores the inherent contradictions between the sun and the "closed cold electrical circuit" that the photographs of it are confined to on the Internet, while also grappling with issues of the individual and the collective. In Personal Subjects (TVs from Craigslist), the artist offers insight into the private lives and interior spaces that have been unknowingly (or perhaps subconsciously) reflected in the screens of the televisions for sale on Craigslist. Sideways TVs (Craigslist), an ongoing project that originated in 2010, depicts the anthropomorphized, rejected relics of a bygone age. The collection of the two-inch squared c-prints of the cumbersome, technological dinosaurs—once representative of the height of home entertainment technology—stand as symbols of their own obsolescence.

A precursor to the contemporary artists highlighted, Robert Heinecken (1932–2006) utilized the power of mass media to subliminally promote ideas about sexuality and politics. In 1969 the artist began subverting and recontextualizing familiar media iconography, superimposing lithographic prints of a gruesome photograph from the Vietnam War or pornography on the pages of popular magazines. He then snuck the copies back on to public newsstands and distributed them in waiting rooms of doctors' and dentists' offices for unassuming consumers to peruse. Heinecken's practice of creating "compromised" and "revised" magazines would continue into the '70s, '80s, and '90s. In a seminal work from 1999, he removed pieces from every page of Time: 150 Years of Photojournalism, 1999, violating iconic images as he layered them into unusual juxtapositions. This magazine, in addition to three earlier examples from 1969 and 1971 (Time: Counter Attack on Dissent, 1969; Mademoiselle Magazine [Periodical # 5]; and Mademoiselle Magazine [Periodical #6], 1971), will be on view.

A public opening will be held on Thursday, September 15 from 6–8 p.m.