Poland - Germany. A 1000 Years of Art and History. For the first time around 800 historical and contemporary exhibits, displayed in 19 rooms and 22 chapters, illustrates the thousand-year history of the complex mutual relations between Poland and Germany. The arrangement of the exhibition in thematic areas serves to enhance understanding of the different aspects of German-Polish neighbourhood. Woven into the exhibition are many works of politically motivated and internationally renowned contemporary artists, including Miroslaw Balka, Krzysztof Bednarski, Edward Dwurnik, Jochen Gerz, Anselm Kiefer, Gerhard Richter, Wilhelm Sasnal, Gregor Schneider, Gunther Uecker, Piotr Uklanski, Luc Tuymans and Krzysztof Wodiczko. 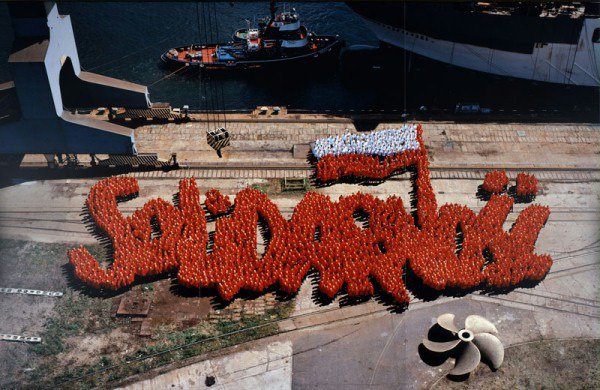 The exhibition is a joint project of Martin-Gropius-Bau Berlin and the Royal Castle in Warsaw have organised the exhibition jointly. It came about within the framework of the international cultural programme of the Polish Presidency of the EU Council in 2011. The project has been supervised by a board of experts headed by Prof. Władysław Bartoszewski.

The exhibition curator is the Polish art historian Anda Rottenberg, who curated numerous internationally renowned exhibitions and served as director of Zachęta, the National Gallery of Art in Warsaw, for many years.
Sixty-seven years and a few days have passed since 18th of September 1944 when German troops destroyed the Royal Castle in Warsaw down to its very foundations while brutally crushing the heroic uprising of the Polish Home Army. Twenty-two years have passed since the fall of the Iron Curtain in Europe, twenty years since the 17th of June 1991 when Federal Chancellor Helmut Kohl and Minister President Jan Krzysztof Bielecki signed the “Polish-German Treaty of Good Neighbourship and Friendly Cooperation”, the original of which can be seen in the exhibition in the Martin-Gropius-Bau.

For the first time around 800 historical and contemporary exhibits, displayed in 19 rooms and 22 chapters, will illustrate the thousand-year history of the complex mutual relations between Poland and Germany. The arrangement of the exhibition in thematic areas serves to enhance understanding of the different aspects of German-Polish neighbourhood. The exhibition begins with St. Adalbert and Richeza, who, coming from Cologne, married the future King Mieszko II and became Queen of Poland in 1025; it then carries on up to the present day: the Landshut Wedding, Teutonic Knights, International Gothic, German enthusiasm for Poland in 1831, World War II, Solidarność, accession to the EU. The exhibition also addresses the horrible period between 1939 and 1945, in which the Germans inflicted infinite suffering on Poland and its inhabitants, represented here for example by the film “Kanał” (1957) by Andrzej Wajda.

Among the outstanding exhibits are the portrait of Margrave Albrecht von Brandenburg- Ansbach by Lucas Cranach the Elder from the year 1528, outstanding 17th century paintings from Danzig, the monumental work “Prussian Tribute” by Jan Matejko from 1882, as well as masterpieces by Veit Stoss, breathtaking treasure find from Środa Śląska/Neumarkt and precious manuscripts.

Woven into the exhibition are many works of politically motivated and internationally renowned contemporary artists, including Mirosław Bałka, Krzysztof Bednarski, Edward Dwurnik, Jochen Gerz, Anselm Kiefer, Gerhard Richter, Wilhelm Sasnal, Gregor Schneider, Günther Uecker, Piotr Uklański, Luc Tuymans and Krzysztof Wodiczko. These works can be understood as footnotes or commentaries, as it were, on historical events through which the past can be seen in a new perspective.

The dynastic ties of the royal house of Poland with other dynasties offer a good introduction to this topic. They illustrate the European context of the Polish-German relations, in particular the marriage politics of the Jagiellonians – their connections with the Hohenzollerns and the Habsburgers, as well as the heyday of the Polish elective kings from Vasa family. These links are represented by the portraits of Cranach the Elder, Hans Maler zu Schwaz, Martin Kober and Pieter Danckerts de Rij, among others. The artworks portray the personal ties between the European dynasties and convey a lively impression of an illustrious epoch that gave rise to a unique cultural high point in the history of the Polish monarchy.

The outstanding exhibits from the legendary dowry of the Polish Princess Anna Katharina Konstanze Vasa that are displayed in the exhibition convey an idea of the wealth of those times – the dowry had to be spread among 70 wagons when the Princess set out for the home of her husband, Philipp Wilhelm, Count Palatine of Neuburg, after their magnificent wedding in St. John’s Church in Warsaw.

Thanks to the support of lenders from throughout Europe the exhibition provides a unique opportunity to see all ten extant engravings and all of the known drawings of the master wood sculptor Veit Stoss. His life and works are of equal importance to German and Polish art history. Stoss’s greatest masterpiece, the wooden altarpiece in St. Mary’s Church in Krakow was sculpted in the years 1477-89, and is now considered one of the most outstanding altarpiece triptychs of the late Middle Ages. Veit Stoss was a citizen of Nuremberg and Krakow – his work in the exhibition testifies to close cultural ties between the two cities in the 15th and 16th centuries. Martin-Gropius-Bau will show sculptures from both the Polish and the German period of the master’s work, including two groups of figures and a design drawing made for the so-called Bamberg Altar. The latter are an example of Stoss’ activity in Nuremberg, and an evidence of the artist’s virtuosity.

The multi-faceted works of the astronomer Nicolaus Copernicus from Thorn/Toruń are represented by his original manuscripts, the first edition of his magnum opus De Revolutionibus Orbium Coelestium from 1543, and books from his personal library. With a look back into the past when the respective national historiographies in both Germany and Poland claimed Copernicus exclusively for their own nation, he will be shown in the exhibition as an example of European intellectuality and transnational thought.

Displayed in the heart of the Martin-Gropius-Bau, the atrium, will be, among other things, the history of the Battle of Grunwald/Tannenberg in 1410 – marking the defeat of the Teutonic Knights, by a Polish-Lithuanian army – which deeply influenced German-Polish relations as ‘lieux de memoire’. The monumental work “Prussian Tribute”, a historical oil painting by Jan Matejko from 1882 – on loan from Krakow – will also be seen in the atrium. Because the German occupiers planned to destroy the work during the Second World War, it had to be disassembled and transported to a secret location. The painting shows an event from the year 1525: Margrave Albert of Brandenburg pays tribute to the Polish King, who has formed the Duchy of Prussia – as a Polish fief – out of the former territories of the Teutonic Knights; at this point Ducal Prussia became largely sympathetic to the Protestant faith.

The chapter devoted to fairly recent history deals with transnational relations. It focuses on German-Polish networks of artists in the 1920s that emerged as part of an international avant-garde in opposition to the swelling nationalisms of the 20th century. The Polish Jewish artist Jankiel Adler, co-founder of the artists’ group Jung Jidysz in Łódź and member of the Düsseldorf-based collectiveYoung Rhineland, formed an important link between Polish and German artists’ circles. He is represented by a number of works, among them the celebrated oil painting My Parents.

In the section devoted to the history of the 1980s and the Polish Solidarność movement the artists are set against the backdrop of a tense political situation, seen as ambassadors, with their art as mediator between the two countries. In 1981 with Construction in Process in Łódź, the Polish artist Ryszard Waśko had initiated a series of exhibitions with Polish and international artists such as Roman Opalka, Józef Robakowski, Richard Serra and Günther Uecker. With the exhibition Waśko sensitised artists “from the West” to the political situation in Poland. In response, immediately after the declaration of martial law in Poland, Düsseldorf artists organised the auction “Against Martial Law in Poland – for Solidarność”. A number of important works made on that occasion can be seen in the exhibition, including Günther Uecker’s Splinter for Poland. Another key work from the period is Joseph Beuys’ Polentransport 1981, which takes reference to Solidarność in Poland in 1980/81. In the summer of 1981 Beuys had travelled to Poland and presented the Joseph Beuys Archive, a crate with graphic works, posters and photos, to the Łódź Art Museum as a gesture of the “symbolic transplantation” of his artistic ideas.

Testifying to the vivid cultural exchange between Poland and Germany, the loans in the exhibition come from more than 200 lenders from Polish, German and international museums and collections, among them the National Museum in Warsaw, Muzeum Sztuki in Łódź, the British Museum in London, Kunsthistorische Museum in Vienna, and the Vatican Library.

An extensive educational programme, also addressed to schoolchildren and students, aims to promote cultural exchange between Poland and Germany. The programme communicates knowledge and contributes to a growing together of the Europe nations and to mutual understanding.

A German-Polish catalogue on the exhibition “Side by Side. Poland – Germany. A 1000 Years of Art and History” is being edited by the Polish art historian Prof. Małgorzata Omilanowska and published by DuMont-Verlag. The c. 780-page, richly illustrated catalogue contains essays by renowned experts from Germany and Poland as well as guest authors from other countries.

Organiser:
Berliner Festspiele. The project is being realised by the Royal Castle in Warsaw, and Martin-Gropius-Bau, Berlin, and funded by the Federal Government Commissioner for Culture and Media, and the Minister of Culture and National Heritage of the Republic of Poland.