The exhibition re-evaluates Flanagan's position as a key figure in the development of British and international sculpture. Focusing on the artists studio practice it will bring together works from 1964 to 1982. It highlights how his sculptures emerged through the interaction of idea, form and process and will reflect his interest in, and engagement with literature, poetry and pataphysics. 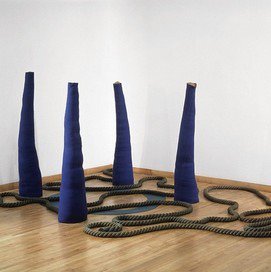 Barry Flanagan (1941-2009) was one of Britain’s most original and inventive artists. This autumn Tate Britain presents a major exhibition which concentrates on his early works and positions him as a key figure in the development of British and international sculpture. Although Flanagan is well known for bronze hare sculptures which can be seen in prominent public spaces around the world, the success of these works relatively late in his career has somewhat obscured the achievements that characterised his early period. This exhibition aims to reassess and contextualise this early work by focusing specifically on his early studio practice from 1965-1982, ending with the first international presentations of his stone, ceramic and bronze works at the Venice Biennale and Documenta 7.

A contemporary of Gilbert & George and Bruce McLean, he studied at St Martin’s School of Art from 1964 to 1966, where he began to challenge traditional notions about the language of sculpture and worked in stark contrast to his mentors. Using media as varied as cloth, felt, clay, plaster and rope, Flanagan created sculptures that were a unique exploration of the interaction between idea, thought and process. This exhibition will highlight Flanagan’s concern with material properties and processes - a concern that is at the heart of an understanding of his practice, whilst exploring his interest in the relationship between the artist and the artisan, tradition and anti-tradition, issues that consistently preoccupied him through his career.

The exhibition follows Flanagan’s career from his acclaimed first solo exhibition at the Rowan Gallery in London, featuring works in soft materials such as the sack-like hessian forms of Bundle 2 1967 (Royal Museums of Fine Arts of Belgium), light pieces and multi-part installations. Sculptures formed from branches and fabric as well as stretcher and hessian works that explored the tension between painting and sculpture will also be shown alongside his stone works, including scaled up carvings in marble made from hand-sized maquettes of clay such as Untitled (Bx4) 1982 (British Council). Culminating with the merging of studio and foundry, and Flanagan’s decision to cast in bronze from the late 70s, the exhibition ends with Large Leaping Hare 1982 (Estate of Barry Flanagan), which was exhibited in Documenta 7 in 1982.

Flanagan’s profound interest in and engagement with literature, poetry and ’pataphysics, an absurdist logic invented by the French playwright and author Alfred Jarry (1873-1907) will also be explored throughout the exhibition, with the inclusion of sculptures such as Ubu of Arabia 1976 (Agnes and Frits Becht Collection, Naarden) highlighting these references alongside drawings and archive material.

Flanagan was born in North Wales in 1941 and studied sculpture at St Martin's School of Art in London. After graduating in 1966 he exhibited at landmark exhibitions Op Losse Schroeven (Stedelijk Museum, Amsterdam) and When Attitudes Become Form (ICA, London) in 1969. In 1982 he represented Britain at the Venice Biennale and Documenta. His bronze hares have been shown internationally, including commissions for Park Avenue, New York (1995-96) and Grant Park, Chicago (1996). Flanagan travelled extensively, living between Dublin and Ibiza in his later life. He was elected a Royal Academician in 1991, the same year he was appointed OBE.