The exhibition brings together the work of 13 artists from India, UK, Italy and Bangladesh and each ones work reflects the preoccupations of the artist as well as the influence of social and cultural conditioning on expression. 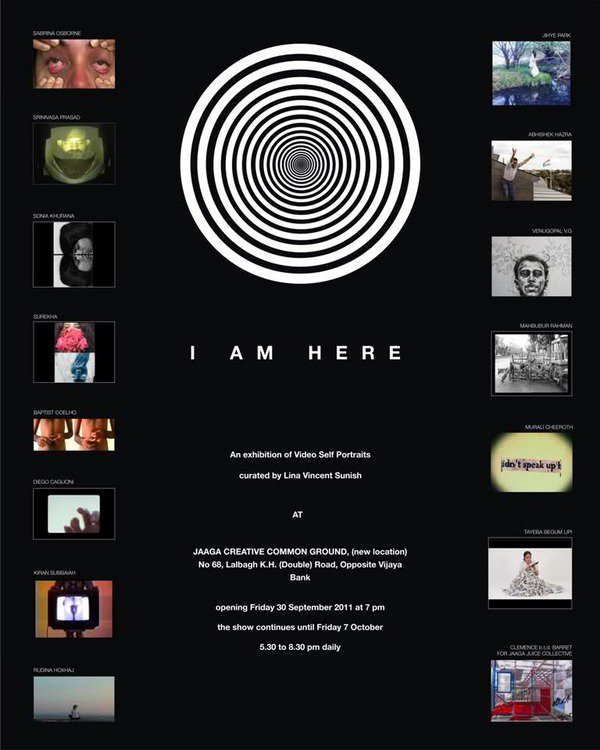 The premise of this curatorial venture is the investigation of the ‘self’.

The concept brings together visual definitions of self, each artist bringing to the dialogue personal notions shaped by myriad internal and external factors. The result is an intriguing layering of concepts – some are explainable through theories from varied knowledge systems that assign altering hierarchies to the role of the body, mind and spirit; others exist as abstract impressions.

The self portrait has a lengthy history in the visual arts; this exhibition would like bring it into a contemporary art context through the inclusion of those working within the pluralistic structure of current practices; they have chosen to adopt, among other things, digital video recordings as a means of documenting the self. The fifteen works in the show have been divided within three frameworks of understanding - 'Body : Instrument'; 'Mission Identity'; and 'Voicing the Collective'.

Though the groupings are meant to ‘see’ relationships within the works, the idea is to allow for an overlapping of context within the themes of self representation, and encourage the viewer to weave their own experiences within the content of the exhibition.

Sonia khurana’s art practice embraces areas in-between video, photography, elements of performance, text, drawing, installation, and more recently, works in public spaces. She tends to draw critically on concerns with interiority and the poetics of everyday experiences in ways that are often visually simple and understated. Through these poetic intimations she aims to persistently explore and re-define the space of the political. After a BFA and MFA in at Delhi College of Art, she received the INLAKS Grant to study art at the Royal College of Art in London, between 1997 and 2000. This was followed by a short course at the Film and Television Institute in Pune and in 2002, a 2-year Research residency at the Rijksakademie in Amsterdam. In the past decade, Sonia has had significant visibility internationally. Recent exhibitions include : ‘Paris-Delhi-Bombay’, Pompidou center, Paris [2011], ‘Video: an art, a history’, Singapore Art Museum [2011], ‘ Indian Highway’ Serpentine gallery, London etc [2008 to ongoing], ‘Elles@Pompidou.center’, Paris [ 2009 to 2011] ; ‘Where three dreams cross’, London and Zurich [2010] ; Liverpool biennial 2010, Aichi triennale 2010 : Nagoya Japan ; ‘West heavens: Place time play’ Shanghai [2010], “a tribute to Yvonne Rainer” B.F.I. [2010], ‘Global feminisms’, Brooklyn museum etc. 2007 to 2010]. She lives and works in Delhi, India.

Murali Cheeroth received BFA and MFA in Painting from Santiniketan. He has exhibited in various significant shows across the globe in the last two decades of his art practice. Few amongst them are ‘Habitus‘, Sumukha Art Gallery, Bangalore and Chennai (2010), Unmarked‘ - New Delhi (2009); ‗ 10th Edition of Video Wednesday, curated by Johny M L, Gallery Espace, April (2009), Passage to India-Part-II new Indian art from the Frank Cohen Collection in March, Wolverhampton. U K. (2009); The Sun Rises in the East, Contemporary Art from India, Gallerie Christian Hosp, Triol, Austria, (2008). In 2011 his work was seen in Opening Borders/Opening Objects ‖, Department of Visual Arts, University of Western Ontario; Louder Whisper ―Orality is Everywhere ― new sound art from India, curated by Meena Vari for CRISP. London College of Communication; “Other Anecdotes” curated group show 2011, 3521 Helms Ave. Culver City, CA 90232. His visual language refers deeply to a variety of sources in the cultural sphere and contains within it a conversation with history of representation in visual media—including literature, fine art, cinema and architecture. His current practice envelopes painting, performance and video art, exploring themes of urbanism and intersections of the global and local. He lives and works in Bangalore, India.