Works of art which, at first glance, run counter to traditional ideas of beauty. The idea for the exhibition was inspired by an installation by Jannis Kounellis, which the artist designed in 1999 for the inauguration of the Essl Museum. The main hall turns into a reflection zone presenting works by Jorg Immendorff, Jannis Kounellis, Zoran Music, Marc Quinn, Daniel Spoerri and Antoni Tapies. 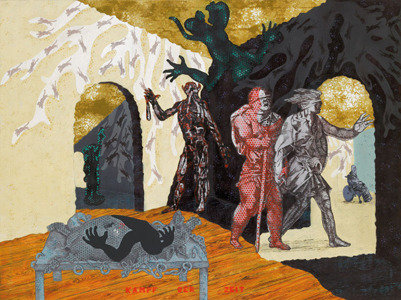 For centuries, artists have been exploring the notion of beauty, which in western civilisation took its origin in Classical Antiquity and was only challenged in the 20th century through the study of non-European civilisations. >BEAUTY AND TRANSIENCE< is not designed to postulate views, but to facilitate, through art, a discussion on central human issues and to inspire viewers to challenge their own ideas and contemplate the subjects presented. What is beauty? The British sculptor Marc Quinn calls classical notions of beauty in question with his sculptures of the artist Allison Lapper, her body cruelly crippled by disease, portraying her in white marble and classical posture.

The exhibition at the Essl Museum presents works of art which, at first glance, run counter to traditional ideas of beauty. The idea for the exhibition was inspired by an installation by Jannis Kounellis, which the artist designed in 1999 for the inauguration of the Essl Museum and which, as so often with his work, is invested with associations to the site and, in this case, the nearby River Danube. The parts of an old and weathered wooden boat hang from a ceiling-high metal mast (about 9 metres high). The artist presents debris that embodies history and encourages associations with terms such as dignity and beauty in its transient fragility.

The artwork of Daniel Spoerri also highlights everyday materials and objects. In his trap paintings, Spoerri takes the opposite approach to a painted still life by entrapping the most transient thing, the present moment, and perpetuating it in “eternal life”. On a table top fixed to the wall, he presents real-life objects, complete with all the residues of a dinner party. This frozen end of a party consists of leftover food on the plates, dried up beverages and cigarette stubs, i.e. anything one would normally consider garbage; and this garbage is then turned into a work of art through conservation.

Since his student days, the late German artist Jörg Immendorff, who died in 2007, sought to connect art and life, albeit in a different way from Spoerri, viz. in a radically political sense – one of the key issues Immendorff explored was the social relevance of art. In 1997, the artist learned that he was suffering from a rare terminal disease of the nervous system which starts by affecting locomotion. After 2004, Immendorff was no longer capable of painting himself and directed assistants who translated his designs into reality. Increasingly, these works turned into reflections on the transience of life.

Each of the elements of Antonio Tàpies’ five-piece work, Dietari I-V from 2002 stands for itself, like the unbound pages of a diary which reports of the same repetitions of everyday actions day by day. Sleeping, eating, digesting, washing are the actions of daily life and bodily existence which become spiritual rituals in the devotion of endless repetition. The diary of an artist who, by looking at the signs of life and daily rituals, explores fundamental issues of existence, of what persists and is essential in life. Zoran Mušič was born in Gorizia (today in Slovenia, then in the Austro-Hungarian Empire) in 1909. From the early 1940s until his death in 2005 he spent most of his time in Venice. After the Second World War, the artist mainly created poetic landscapes that turned increasingly abstract in appearance and are characterised by a very sparing use of colour. In the early 1970s he created his famous series of paintings on his experiences in a German concentration camp, Nous ne sommes pas les derniers. In the years before his death, Mušič painted a number of self-portraits and double portraits of himself and his wife. Paring these portraits of everything he did not consider essential, the artist used a coarse canvas on which he presented the body as a dark contour, only the hands and the face heightened with white and thus given a more physical appearance.

All works shown at the exhibition are owned by the Essl Collection.