Plant Drawings, a selection of around 65 drawings of plants and twelve large-scale lithographs by the American artist - on display at the Pinakothek der Moderne - spans all decades in which he has been active since the 6 years he spent in France, from 1948-54. Black & White, a selection of about 50 paintings and reliefs from 1948 to 2010 - on display at the Haus der Kunst - constitutes about one-third of his large opus and they provide information on the various stages of his artistic development since the 1940s. 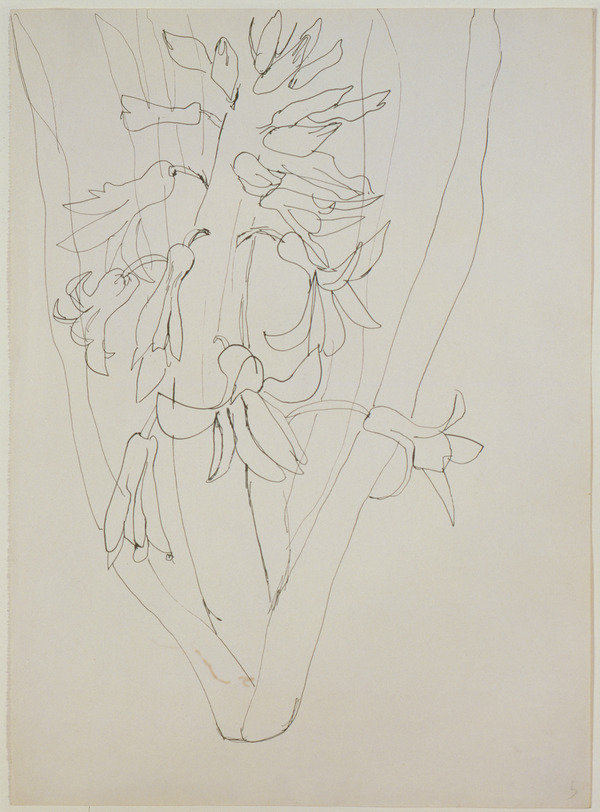 This selection of around 65 drawings of plants and twelve large-scale lithographs by the American artist Ellsworth Kelly, now 88, spans all decades in which he has been active since the 6 years he spent in France, from 1948-54. This early period gave rise to a rich body of drawings inspired by the close observation of nature that also saw Kelly tackle a century-old tradition in fine art – the depiction of plants. Kelly himself has stated that his early plant drawings form the basis of his entire later work.

It was in Paris that Ellsworth Kelly first embarked on developing what eventually became an autonomous abstract pictorial language. The artist held a teaching post in the city at the American School between 1950 and 1951.

His encounter with works as diverse as those by Monet and Matisse, Le Corbusier, Hans Arp and Sophie Taeuber-Arp, Brancusi, Mondrian, Vantongerloo and Picabia had a profound impact on his own gradually evolving pictorial language. Unlike most other American artists of the 20th century, Kelly explicitly included a critical appreciation of the traditions of European modernism in his work. His ‘Plant Drawings’ reflect a particular mode of perception, which – as evidenced in other subjects in his drawings – focussed on removing certain visual details, observed from the material world around him (such as reflections and ripples on the Seine, shadows cast from shutters etc.) from their actual context and objectifying them as purely artistic forms. It is this idea that allows the artist to see, for instance, a direct relationship between the curved outline of a banana leaf and the form of one of his shaped canvases.

After its premiere in Munich, the exhibition will go on show at the Louisiana Museum of Modern Art in Denmark and then the Metropolitan Museum in New York. To accompany the show, an extensive catalogue is due for release, including around 100 illustrations, an interview between Ellsworth Kelly and Marla Prather and an essay by Michael Semff.

The exhibition has been made possible thanks to generous support from Merck Finck & Co.

Parallel to this exhibition, a retrospective of Kelly’s paintings is being held in the Haus der Kunst in Munich, entitled ‘Black and White’. Both exhibitions will open simultaneously, on the evening of 6 October 2011.

The exhibition is devoted solely to the works in black and white.

Ellsworth Kelly (b. 1923 in Newburgh, New York) regularly verified a newfound formal solution through an execution in black and white. Mostly these versions in black and white were created parallel to the coloured versions; sometimes they preceded them. According to Ellsworth Kelly, his paintings in black and white comprise approximately 20 percent of his total œuvre; their amount in the complete work is higher than that of any other two-colour combination. So far these works have never been brought together in an exhibition, although the artist has encouraged this kind of retrospective since the 1990s.

Since the beginning of his artistic endeavours, Ellsworth Kelly dealt with basic shapes he found in reality. In so doing, his perception is inspired by an object's external characteristics. He is interested in shadows and the texture of surfaces isolated from their contexts. By transforming his pictorial ideas into black and white - as a representation of dark and light - Ellsworth Kelly is able to concentrate exclusively on form and outline. The distraction of emotional values of colours is omitted.

Ellsworth Kelly's use of these forms revolves around one central topic: How significantly does the perception of mass and volume, of figure and ground, of the canvas and its relation to space alternate, depending on whether black appears over white or white cuts through black.

Ellsworth Kelly usually reduces an object that captivates his attention into the two-dimensional: a glass porch, the floor of a terrace in an Parisian sidewalk cafe, the shadow of a hand rail on a staircase. His gaze penetrates these objects, i.e. he reaches to their very nature by removing them from their spatial context. Ellsworth Kelly isolates and copies without modifying or adding anything. He deliberately does not resort to invented lines and is thereby free of any necessity to compose something: "The things that interest me were always there."

In this way a fragment of everyday reality, which he translates into simple, memorable forms, is transformed into a sign that can be understood spiritually. The canon of forms Ellsworth Kelly has created over the decades is as reserved as elegant and maintains a balance between monumentality and fragility.

An example of his approach, which has since become an iconic figure, dates from 1949, "Window. Museum of Modern Art Paris". One of the museum's vertical windows served as the motif for this relief. Ellsworth Kelly measured the window's panes, had a cabinet maker construct wooden reproductions of the frame and painted these. The lower of the two panels out of which the "Window. Museum of Modern Art Paris" consists, lies behind the upper one. Moreover, the frame and the mullions cast real shadows. In much the same way a year later, while spending the summer in Meschers-sur-Gironde on the Atlantic coast of France, the shadow cast by the railing on the white stairs leading to his room gave him the idea for the series "La Combe". The execution in black and white is a folding screen of nine panels. Fragments of diagonals protrude from the top in its white ground.

Ellsworth Kelly long kept the source of his motifs quiet. Presumably he was doubtful that his paintings would be comprehended as solely inspired by everyday objects, and his proximity to figurative abstraction would be overestimated. Back then there was an ideological abyss between abstract and representational painting. He himself stated that Mondrian's style and his program of neutrality, which places no emphasis on texture or brushstroke, the aura of Constantine Brancusi's forms as well as the work of Picasso were all important for his artistic development.

Years later Ellsworth Kelly changed his attitude toward the disclosure of his sources. During a sojourn in Paris in 1967 he photographed the window that provided the motif for "Window. Museum of Modern Art Paris", thus subsequently revealing the painting's source. The reason was that he wished to oppose something against the classification of his work as Minimalistic.

The cosmos of his black and white works is in the exhibition expanded by a concise selection of drawings, collages and photographs. With his drawings and collages Ellsworth Kelly sketches ideas for images that he sometimes only executes decades later. The photographs document the original impressions that have become established as perceptions: a broken pane of glass, a rooftop that reaches down to the meadow, the gentle elevation of a snowy hill, the reflection of the sun on a corrugated roof, the hard diagonal shadow of a garage driveway. In their function as reminders they are subordinated to the paintings and yet testify to the search for similar phenomena.

Published by Hatje Cantz, the catalogue includes texts by Jörg Daur, Carter Foster, Alexander Klar, and Ulrich Wilmes; ca. 200 pages including ca. 70 illustrations, ISBN 978-3-7757-3217-8.
The exhibition is on view from 1 March to 24 June 2012 at the Museum Wiesbaden, where Ellsworth Kelly will be awarded the Jawlensky Prize during the opening.