The artistic and urban rendezvous. Every two years, the festival offers international artists an chance to cast a new eye over the city, explore it and turn it into an atypical place of artistic experimentation. This 2011 festival is thus bringing together famous and emerging figures, for a free event that is demanding, generous, multicultural, and designed for all kinds of public keen to discover and share. This year the carte blanche was offered to Michelangelo Pistoletto and his foundation. 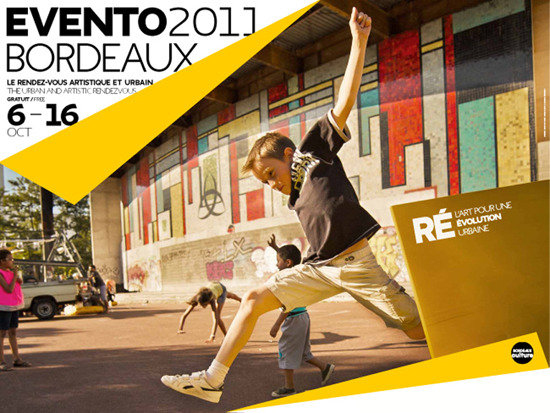 From 6-16 October 2011, the second EVENTO festival will underscore Bordeaux’s liking of daring cultural adventures, by way of the carte blanche offered to Michelangelo Pistoletto and his foundation Cittadellarte to create an original, surprising and festive event of contemporary creation.

Every two years, EVENTO offers international artists an chance to cast a new eye over the city, explore it and turn it into an atypical place of artistic experimentation. This 2011 festival is thus bringing together famous and emerging figures, for a free event that is demanding, generous, multicultural, and designed for all kinds of public keen to discover and share.

Art for an urban re-evolution
As a major figure of Arte Povera , the Italian philosopher and humanist Michelangelo Pistoletto is persuaded that art must be at the hub of social and responsible urban change. As artistic director of EVENTO 2011, he has thus decided to link inhabitants and visitors powerfully together with the production of ideas and creative projects at the city’s heart, thereby illustrating the theme of the bond between art and citizenship.

Unexpected multidisciplinary encounters for many different participatory experiments and experiences
Original works, dance, performances, concerts, installations, exhibitions, urban games, sharing of savoir-faire and experience, co-construction of citizen projects, etc. will all occupy the city’s public places and its museums, for meetings aimed at reinventing the city and finding new ways of living together.

Dance, performances
Pippo Delbono, actor, director, head of an iconoclast theatre troop, is creating for EVENTO a new opus, intermingling with public space to orchestrate a complete representation. “There are no characters, but rhythms, colours, voices, contradictions, directions, balances, imbalances; all the time, like a musical composition. You have be on the set without your head.” On the other side, Claudia Castellucci, founder with her brother Romeo of the company Societas Raffaello Sanzio, proposes her Bordeaux Rhythm School, that will make student dancers work around rhythm and movement. This intensive collaboration, thought up as an artwork in itself, will give show to several representations in the Grand Theatre.

Music
David Cossin, member of Bang on a Can All Stars and founder of the Sound Res programme (Italy) has imagined a meeting of musical genres, from the procession of ghetto blasters to spiritual music, by way of American minimalism, as well as a new way of sharing and composing music. Participatory concerts, parades and musical performances will stake out EVENTO’s ten-day festival, with contributions from students of the Conservatoire de Bordeaux and internationally renowned musicians like the New York Bang on a Can All Stars, the Czech violinist and singer Iva Bittova, David Sheppard of the Warp label (United Kingdom), the Sufi composer and singer Madan Gopal Singh (India), and the specialist in harmonic chants, David Hykes (United States). From the Grand Parc to the Submarine Base, by way of the embankments, the historic centre, the Rocher de Palmer, and the Conservatoire that will be open to the public during EVENTO, this programme will enliven the public places in the city’s different neighbourhoods.

Exhibitions
The “Roots” project is made up of three exhibitions, on view from October 2011 to February 2012, which illustrate the creative context chosen by the artistic direction for EVENTO 2011, so as to embark on its “urban re-evolution”. The artists invited here cast an eye over Bordeaux’s historical, artistic and urban upheavals and goings-on. This at once retrospective, contextual and forward-looking exploration is being undertaken with three of the city’s Museums: the Musée d’Aquitaine, the CAPC musée d’art contemporain de Bordeaux, and arc en rêve centre d’architecture.

Historical roots
The central theme of this exhibition is modern slavery in our contemporary societies, linked with the Musée d’Aquitaine’s rich collection about the three-way trade and slavery in the 18th century, recounting the link the city has with its own history. Writing and re-writing history, understood as the inscription both of a perceptible trace and of differences, is not a static approach but a current and vital one which reveals and brings out new relations, and new outlooks. Participation of William Kentridge, Pascale Marthine Tayou, Shilpa Gupta, Michael Blum, Wael Shawky, Marzia Migliora.

Artistic roots
The Van Abbemuseum at Eindhoven (Netherlands), well known for its politically involved art collection, and its director, Charles Escher, are invited by the CAPC musée d’art contemporain de Bordeaux, to put on the exhibition Strange and Close about the notion of “vicinity”. In the CAPC’s nave, the works of thirty artists present the negotiations and tensions which result for life shared in one and the same space. With the participation of Marjetica Potrč, Dan Peterman, Yael Bartana, Artur Zmijewski, Chto Delat, Daniza Dakic, Harun Farocki, Akram Zaatari, Nedko Solakov, Aydan Murtezaoglu...

Urban roots
The exhibition, jointly curated by STEALTH.unlimited and arc en rêve centre d’architecture, will narrate urban utopias and take the form of a fresco made by Bordeaux-based graphic artists and comic strip authors, themselves interpreting words penned by a writer and a philosopher. The fiction, set in 2030, will present collective forms of organization, capable of anticipating new ways of making the city, based on a political commitment and new forms of solidarity.