Look at my face: my name is Might Have Been; I am also called No More, Too Late, Farewell. The exhibition, curated by Adam Budak, is going to foreground a self-reflexive nature of the photographic medium and its current condition. On show Helena Almeida, John Baldessari, Becky Beasley, Inaki Bonillas, Stefan Burger, Miriam Bohm, Banu Cennetoglu, Sunah Choi, Annette Kelm, Elad Lassry, Tatiana Lecomte and many more. 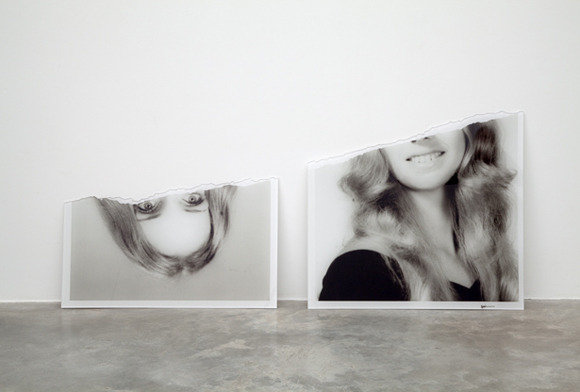 Look at my face: my name is Might Have Been; I am also called No More, Too Late, Farewell, thus Edgar Auber phrased his, according to Giorgio Agamben, pretentious dedication on the back of his photograph, given to Marcel Proust in 1893. Appropriated from Dante Gabriel Rossetti's sonnet, „The House of Life", this memorable dedication became the leitmotif of Proust's life, a guideline that hunted the writer, a synonym of love, memory and remembrance, as well as an evidence of Proust's authentic passion for photography. Following the promiscuous life of pictures, the exhibition BEYOND refers to Auber's dedication and considers it as a unique definition of photography which contains reflection upon time and its fragmentation, performance and its exigency as well as a distance and its gesture of separation.

BEYOND (Look at my face: my name is Might Have Been; I am also called No More, Too Late, Farewell ) is foregrounding a self-reflexive nature of the photographic medium and its current condition as well as the photography's "conditionality" and "exigency" (what Agamben calls "a demand for redemption", or what he perceives as an agent of the "real that is always in the process of being lost, in order to render it possible once again"). What makes photography "possible"; what makes it "work", being "useful" and acting in a "relational" way; how photography continuously contributes to the architecture of the image and goes BEYOND (it); what does make photography "speak"; what is "gestural" about it; how to go BEYOND the medium or move AROUND while simultaneously remaining within the photographic discourse? BEYOND as an assemblage of photography-based work, first of all, focuses on artistic positions that are concerned with the use(s) of photography as well as those that are interested in the broader notion of the medium in the expanded field, marked by blurred borderlines between other forms of expression and escaping categories, seducing senses, provoking other storylines. Furthermore, the "behavior" of a photographic image is being here analyzed and the photography considered as a spatial practice is in focus. Conditions such as "in-between", "beyond" or "parallel to" and "more than" are essential for this show which concentrates on subversive and critical approaches to image production and the status of photography as a medium, exposed to manipulation and abuse. Artists' usage of an image is illuminating an on-going process of questioning image's ontological stability. Oscillating between appropriation and an original, illusion of a movement and a suspense, flatness and three-dimensionality, it generates a new—non-defined yet—quality of perception that requests spontaneity from a viewer as well as a certain gesture of implied improvisation. In majority of cases, it is a highly performative proposition where the non-existing movement is a movement of a performance in fact.

BEYOND departs from one of the most beautiful ever written essays about photography, "Judgment Day" by Giorgio Agamben (included in his collection of essays, "Profanations") where photography gains a mission of "capturing the Last Judgment": it represents the world as it appears on the last day, the Day of Wrath, when "everything that happens" is called forth, summoned to appear on Judgment Day. Agamben analyses the relationship between gesture and photography. For him, the photograph is always more than an image: "it is the site of a gap, a sublime breach between the sensible and the intelligible, between copy and reality, between a memory and a hope." While embracing the formal and the narrative and acting as an interruption, or a rupture, or a break, this exhibition's ambition is to map such a breach.

Daniele Monticelli / Lecture
"The Event of Language: Life In (and After) the Society of the Spectacle according to Giorgio Agamben".
Daniele Monticelli will focus on Giorgio Agamben's understanding of communication and mediality as pure potentiality, touching upon the notions of belonging, inclusion/exclusion, bordering, singularity and their function in the philosopher's attempt to imagine the new political and aesthetical form-of-life of the 'coming community'.

Daniele Monticelli took his PhD (2008) in Semiotics at Tartu University with a thesis on the nature of theoretical constructions in semiotics, philosophy and political theory and his MA degree (1995) in Philosophy at the University of Milan with a thesis on the semantic of conditionals. He works as Associate Professor of Italian Studies and Semiotics at Tallinn University where he chairs the Department of Romance Studies. His fields of research include philosophy of language, contrastive linguistics, translation theory, literary semiotics and political philosophy. He has published several articles on these topics and some literary and essayistic translations from Estonian into Italian. He regularly publishes reviews and essays on Estonian cultural journals and writes as a political columnist for Estonian newspapers.

Liz Wells / Lecture
"Beyond the Image – On Photography and Contemporary Currencies of the Sublime".
In his short essay, 'Judgment Day' Giorgio Agamben identifies gaps, 'a sublime breach', between copy and reality, memory and desire, expression and representation. Through reference to the exhibition, BEYOND, and to examples from photography concerned with people, place and landscape, this talk reflects on shifting notions of the sublime.

Liz Wells writes and lectures on photographic practices. She edited The Photography Reader (2003), and Photography: A Critical Introduction (2009, 4th ed.) and is also co-editor of photographies, Routledge journals. Publications on landscape include Land Matters, Landscape Photography, Culture and Identity (2011). Exhibitions as curator include Facing East, Contemporary Landscape Photography from Baltic Areas (UK tour 2004–2007), Chrystel Lebas and SofijaSilvia - Conversations on Nature (Rijeka, Croatia, 2011) and Landscapes of Exploration, recent British art from Antarctica (Plymouth, 2012). She is guest curator for an exhibition of landscape photography from European Union nations (BOZAR, Brussels, 2012). She is Professor in Photographic Culture, Faculty of Arts, University of Plymouth, UK, and convenes the research group for Land/Water and the Visual Arts. www.landwater-research.co.uk

"(AROUND) Photography, or WHAT pictures NOW?" / Panel Discussion
What is MORE THAN a photography? What is its BEHIND and BEYOND? Discussing a current (hidden) potentiality and a consistency of a medium, mapping the lines of escape and summing up the strategies of taming, together with the artists who participate in the exhibition, Becky Beasley, Stefan Burger, Sunah Choi, Denes Farkas, Caroline Heider, Tatiana Lecomte, Christodoulos Panayiotou, Alexandre Singh... Moderated by Adam Budak, Exhibition's curator.