For his most recent work on show, Ashura (2011), Ergun filmed the Ashura ritual of the Caferi group, a Shiite minority in Istanbul. Every year they commemorate Imam Hussein by putting on a play about his murder. 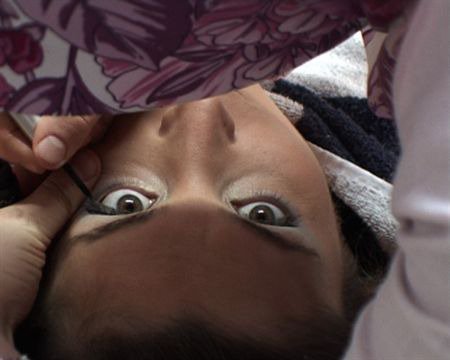 Köken Ergun grew up in secular Turkish society in the tradition of Kemal Atatürk. I, Soldier (2005) is a two channel video work that is closely linked to the artist’s past and his problems with republican and nationalist politics. It features a soldier’s patriotic and martial speech about his devotion to Turkey and combines it with pictures of the army’s parade on the occasion of the Youth and Sports Day.

For WEDDING (2006-2008) Ergun filmed more than fifty different weddings over several months in the same area of Berlin. Backed by uplifting Turkish folk music, it celebrates the exuberant joy of the wedding parties, but at the same time it shows bizarre details such as a tally being kept of the monetary gifts made to newlyweds, a scene which, for a European audience, evokes more the atmosphere of a bingo hall than of the most special day in one's life.

In Binibining Promised Land (2010) a video about a pageant of Filipino guest workers in Tel Aviv takes centre stage. It is part of an installation which also includes covers of magazines published by the Filipino community in Israel and three interviews with the organisers of the pageant. For his most recent work Ashura (2011), Ergun filmed the Ashura ritual of the Caferi group, a Shiite minority in Istanbul. Every year they commemorate Imam Hussein by putting on a play about his murder.

A catalogue entitled Who Am I Anyway? is being published to mark Köken Ergun’s first comprehensive solo show. It features three interviews with Ian White, Elmas Deniz and Oliver Kielmayer and is designed by Studio Lambl/ Homburger, Berlin.